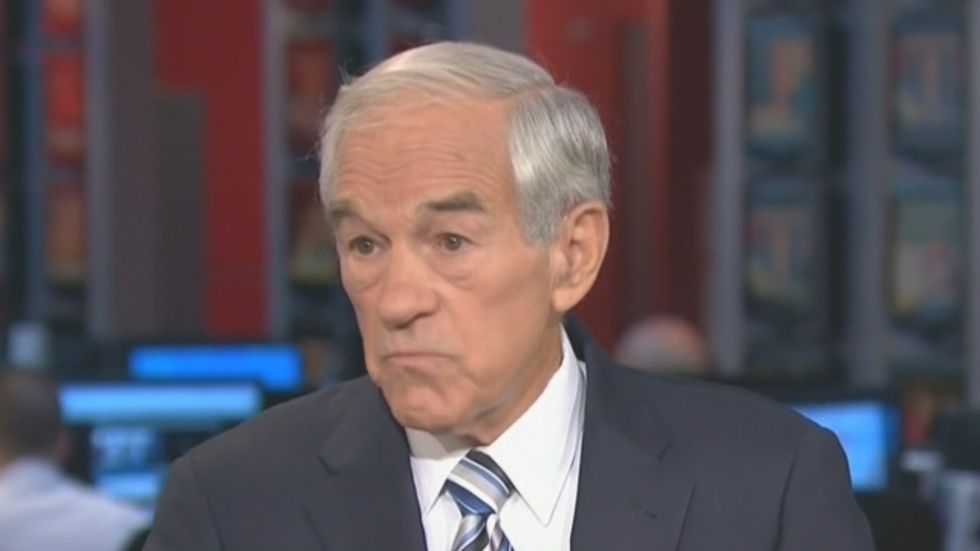 Recent events like the attack on the offices of satirical French magazine Charlie Hebdo and Russia's invasion of Ukraine have opened rifts in the U.S. Libertarian community. Fault-lines are breaking open between conspiracy-minded supporters of U.S. iconoclast Ron Paul and economic and political absolutists who believe that Paul is damaging the movement's credibility.

Even as conspiracy-mongering radio host and InfoWars.com proprietor Alex Jones endorsed Sen. Rand Paul (R-KY) for president in 2016 on Wednesday, a movement is afoot to discredit Paul's father, retired Rep. Ron Paul (R-TX), and unseat him as the figurehead of U.S. Libertarians.

On Wednesday, Mediaite reported that Jones had conducted what he called an "exclusive, intense, in-depth, real-question interview" with Ron Paul. After which, the radio host declared his intention to support Paul's son, Sen. Rand Paul, for president.

“Rand Paul is the best,” said Jones. “I trust him...and he’s the guy for president.”

But even as his son's fortunes are ascending -- just weeks ago, the New York Times magazine compared the younger Paul and the Libertarian movement to the punk-ish "grunge" wave that revitalized rock and roll in the 1990s -- Ron Paul is facing opposition for his more outlandish views.

At risk for damaging his credibility and spoiling the "Libertarian moment" are the Paul Institute's startling assertions the CIA agents carried out the Charlie Hebdo attack, as well as statements that the conflict between President Vladimir Putin's Russia and Ukraine was drummed up out of whole cloth by the U.S. and the Obama administration.

Matt Welch at Reason.com pointed out that the Paul Institute republished assertions by Paul Craig Roberts asserting that the police and magazine employees murdered on Jan. 7 were killed by U.S. Central Intelligence Agency operatives disguised as terrorists.

"The attack on the cartoonists' office was a disciplined professional attack of the kind associated with highly trained special forces; yet the suspects who were later corralled and killed seemed bumbling and unprofessional. It is like two different sets of people," Roberts said.

"Usually Muslim terrorists are prepared to die in the attack; yet the two professionals who hit Charlie Hebdo were determined to escape and succeeded, an amazing feat," Roberts went on. He alleged that the mistakes that led to the identification of Cherif and Said Kouachi were too amateurish for such purportedly highly trained operatives.

To him, Roberts wrote, the story suggests nothing so much as "the undamaged passport found miraculously among the ruins of the two WTC towers that served to establish the identity of the alleged 9/11 hijackers," a story that has been a lynchpin of the 9/11 "Truther" movement which alleges that the attacks on the Pentagon and World Trade Centers in September of 2001 were engineered by the U.S. government.

The CIA's goal, Roberts said, was to frighten France back into line with U.S. policies, that the European nation has "voted in the UN with Palestine against the US-Israeli position" and "showing too much foreign policy independence."

Welch said that for the Paul Institute to indulge flights of fancy like Roberts' is damaging to the Libertarian movement, amounting to little more than conspiracy-minded clickbait.

"Roberts' piece will intrigue that narrow readership fond of fact-lite, rancidly-posited dot-connecting exercises," Welch said, "and repel just about everyone else."

"I have tremendous respect for Ron Paul, who has been named a 'Hero of Freedom' by both the magazine I edit and the television show I co-host," Welch insisted. But the Paul Institute, he said, has a long history of publishing "some seriously bizarre commentary over the years."

"Bad arguments -- including/especially any from me or the staff of this magazine," he wrote, "do not deserve a free pass merely by dint of being ideologically simpatico."

Both Pauls have long enjoyed a curious status as members of the Republican Party who are nominally Libertarian. They have enjoyed all of the benefits of caucusing with Republicans and cheerfully helped themselves to re-election funds from Republican donors. All the while, father and son alike have carefully cultivated an image of themselves as maverick government outsiders who cater to the far-right fringe, gliding effortlessly from appearances on The Alex Jones Show to Sunday slots on Meet the Press.

Now a group of three members of Students for Liberty (SFL), the international Libertarian organization, have declared that SFL must distance itself from Ron Paul over his habit of "unconscionably regurgitating [Russian] propaganda" about President Vladimir Putin's invasion of Ukraine and "feeding Putin’s narrative that Ukraine’s revolution was a fascist coup choreographed by the US."

The three SFL members, all women, are Egle Markeviciute of Lithuania, Alexandra Ivanov of Sweden and Irena Schneider of the US and Russia. Their website declares, "We are classical liberals and we do not support Ron Paul."

According to them, Ron Paul and the Institute for Peace and Prosperity have "crossed the line from a position of US non-intervention in international affairs to the outright promotion of tyrants and the lies they weave. By pursuing a campaign of misinformation in the name of liberty, peace and prosperity, Ron Paul is flying in the face of everything SFL stands for, undermining a movement of students fighting against brutal regimes at the risk of life and freedom."

Paul supporters like "anarcho-capitalist" Lew Rockwell are dismissing the women's complaints as ridiculous.

Rockwell published a lengthy blog post by Robert Wenzel of the blog Target Liberty, who cited pro-Putin sources like Russia Today and the right-leaning Economic Policy Journal to bolster his and Paul's assertion that the Ukraine conflict was cooked up by the Obama administration and the U.S. State Department.

Wenzel accused the women of being agents provocateurs sent by pro-U.S. interests to infiltrate and take down Students for Liberty from within.

He wrote, "The question that must be asked now is: Has the empire infiltrated the International Students For Liberty, so that it has becoming nothing but another propaganda outlet for the empire?"

To his thinking, Rockwell wrote, there could be no other explanation for this "SFL Ladies Troika pissing on the great Ron Paul."