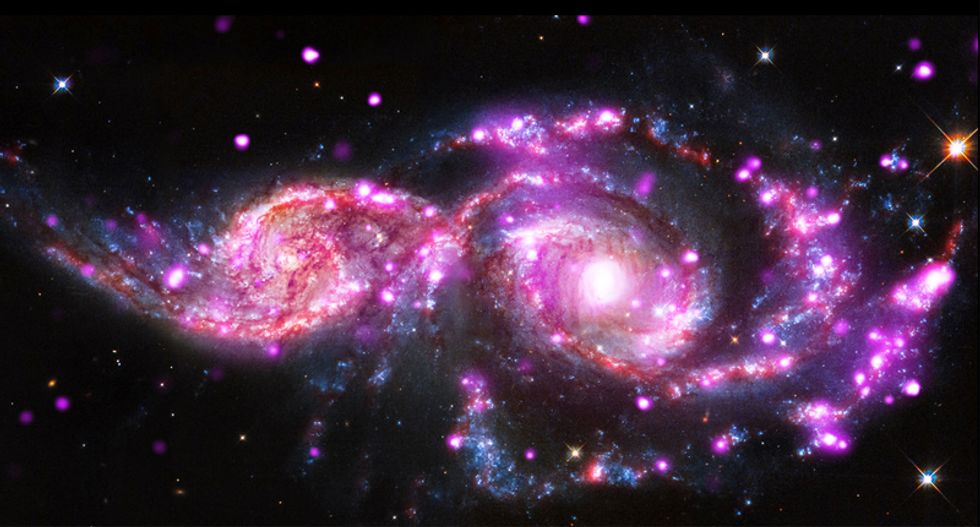 It is a groundbreaking mission that will sweep robotic spacecraft around the Earth in displays of global formation flying. High-precision guidance systems and delicate rocket thrusters will enable the project’s two satellites to move in synchrony. And if all goes to plan, European engineers will have created an extraordinary device in orbit.

The European Space Agency (Esa) project is breathtaking in its ambition and depends on a level of precision never before achieved in orbit. By flying two or more small satellites in very tight formation, virtual telescopes of incredible power and sensitivity will help astronomers to observe Earth-like planets in orbit around distant stars. These worlds could then be studied to determine if they could support extraterrestrial life.

The short-term aim of the Esa Proba-3 project is to improve astronomical studies of the Sun, but it is the long-term potential that really excites. Space telescopes - orbiting outside Earth’s image-distorting atmosphere - will no longer be made of physically connected parts but will consist of components, flying on separate flight paths, that are kept in place by arrays of sensors and thrusters.

“There is a limit to the size of a telescope that you can put in a rocket,” said Proba-3’s project manager, Agnes Mestreau-Garreau. “However, if we can demonstrate the effectiveness of this kind of technology it could be used to fly smaller spaceships in formation to create a virtual telescope of incredible power, one that could pinpoint Earth-like planets orbiting close to stars.”

The agency’s engineers have already developed sophisticated flight systems that allow them to guide spacecraft with considerable precision. Its automated transfer vehicle, a capsule that supplies the International Space Station with propellant, water, air and other payloads, makes fully automated dockings, a task carried out with centimetre accuracy. Proba-3’s two component craft are intended to fly with even greater precision.

To do this, the robotic vessels will use radio- and laser-based technology to maintain highly accurate measurements of their relative positions and attitudes. Tiny thrusters, capable of making delicate changes to the crafts’ positions and relative speeds, will manoeuvre them so that they maintain a perfect attitude above the Earth and maintain a precise distance between themselves.

European Space Agency engineers say they intend the two craft to be able to control themselves with an accuracy of one millimetre while keeping them flying in formation while 150 metres apart.

One of the satellites will point its instruments towards the Sun. The second will fly on a trajectory that will place it directly between the first craft and the sun and will carry a disc that will occlude it. In this way, a long-lasting total solar eclipse will be created for the first craft, allowing astronomers to use its instruments to study the corona, the Sun’s outer atmosphere.

The Sun is a million times brighter than its corona, which only becomes noticeable on Earth during total solar eclipses – when the Moon blots out the Sun’s disc. Instruments called coronagraphs can be attached to telescopes to replicate an eclipse. However, coronagraphs used on ground-based telescopes suffer because the Earth’s atmosphere scatters light coming from the Sun.

Orbiting telescopes fitted with coronagraphs avoid this problem and several satellite-borne instruments have been used in the past, allowing astronomers to make key observations that have helped them to understand how the corona transports plasma and solar energy across space to the Earth.

Proba-3 is intended to take this science a step further by creating a giant coronagraph from two small satellites flying in a highly accurate formation and will address major mysteries regarding the Sun, including the fact that the corona’s temperature of up to 1,000,000C is vastly hotter than the actual surface of the Sun. Proba-3 may help to solve this puzzle

It is not just solar physics that will benefit, however. Astronomers see formation-flying satellites as a solution to the problem of building the large orbiting telescopes they need to study our galaxy and our universe in greater and greater detail.

“Success [for the Proba-3 project] would deliver a whole new way of designing and flying space missions, with multiple tightly controlled satellites able to form giant virtual instruments in space, far larger than anything that could be launched in one piece,” said Mestreau-Garreau, who is based at the European Space Research and Technology Centre in the Netherlands.

On Earth, extremely large telescopes can be built using modern lightweight materials, but even on high mountain tops they are affected by the distorting effects of the atmosphere. In outer space, this problem is avoided. On the other hand, getting large telescopes into space is tricky.

The best known orbiting observatory, the Hubble space telescope, has a relatively small, 2.4-metre diameter mirror for collecting light, its size having been restricted by the dimensions of the hold of the space shuttle that put it into orbit. Its replacement, the James Webb space telescope , although larger, will only be put into orbit by designing its multi-segment mirror so it can be folded up inside its launcher and unfurled in space.

However, space engineers accept that there is a limit to their ability to design single instruments that can be squeezed into launchers. The answer, they believe, is to create more formation-flying missions, flotillas of small craft that will be able to carry out all the tasks of a virtual large single telescope.

“The key is going to be finding the right way to use the highly precise sensors and instruments that are now available to create a huge telescope from a few smaller craft,” said Mestreau-Garreau. “The potential is immense, however.”

LOOKING TO THE STARS

■ The world’s largest optical telescope is the Gran Telescopio Canarias in the Canary Islands, pictured. It has a light collecting surface equivalent to that of a 10.4-metre (34ft) mirror.

■ The twin Keck telescopes at Mauna Kea in Hawaii come a close second. Each has a mirror with a diameter of 10 metres.

■ The Hubble space telescope has a mirror of only 2.4m, while its replacement, the James Webb telescope – scheduled for launch in 2018 – will have a segmented mirror of 6.5 metres.

■ Other mighty star-gazers include the Very Large Telescope at the Paranal Observatory in Chile – at an altitude of 8,645 ft – which has four 8.2m mirrors and four movable 1.8m auxiliary telescopes.

■ Ten years from now, astronomers intend to top all of these instruments – with ease – when the European Extremely Large Telescope (E-ELT) at Cerro Armazones in Chile is completed. It will have a working mirror equivalent to nearly 40 metres large enough to probe exoplanet atmospheres in detail.