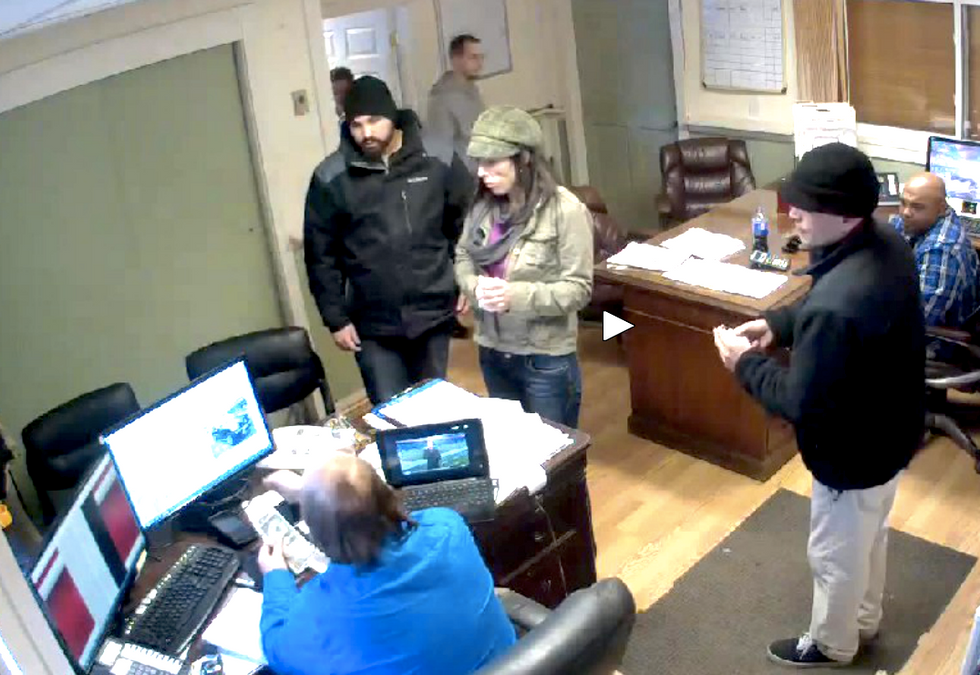 After video of their prank on a pizza delivery driver went viral, employees of a Massachusetts used car dealership are getting hammered by critics online.

According to the Boston Globe, the auto dealership employees placed a delivery order in which "(t)he total bill for the pizza and drinks was just over $42."

The dealership gave the driver $50 in two twenties and two fives. He confirmed that he was to keep the change and left the premises.

Dealership employees then called the driver and demanded that he bring back their seven dollars and change, which the driver had pocketed, reasonably thinking that it was his tip.

In the video embedded below, the car dealership employees berate the driver, accuse him of stealing their money and to threaten to have him fired.

"Hey listen," said one employee. "The manager already apologized once for you, are you gonna apologize?"

A female employee tells the driver to get out now, or else she'll "put a foot in your ass."

When the driver is gone, another employee urges his coworker to call the restaurant back. "I want that job," he says. "I want him fired."

On the F&R Auto Facebook page, commenters are lambasting the company for its treatment of the driver.

"You are very bad and should make amends with the pizza guy you humiliated," one user wrote.

"You guys open?" asked another. "I could go for some pizza."

"I bought a car from here and there were 2 dead hookers in the trunk," one complained. "I asked for 3!"

A look at the dealership's Yelp profile, however, shows that F&R Auto Sales was not much-beloved by customers even before the prank video made them famous.

"Don't EVER come here. They're a bunch of crooks and will do anything to keep your money and not give it back!" wrote one user in May of 2013. "These jerks don't know what they're doing. BEWARE!"

"If I could rate it a minus-100 stars I would. LIES, UNPROFESSIONAL, RUDE, CONDESCENDING. Those are just the nicest of the words I can list for these individuals," said another review.

A review from October of this year said, "I do not know how this place is still in business with all the people they scammed."

Watch video of the prank, embedded below via LiveLeak: