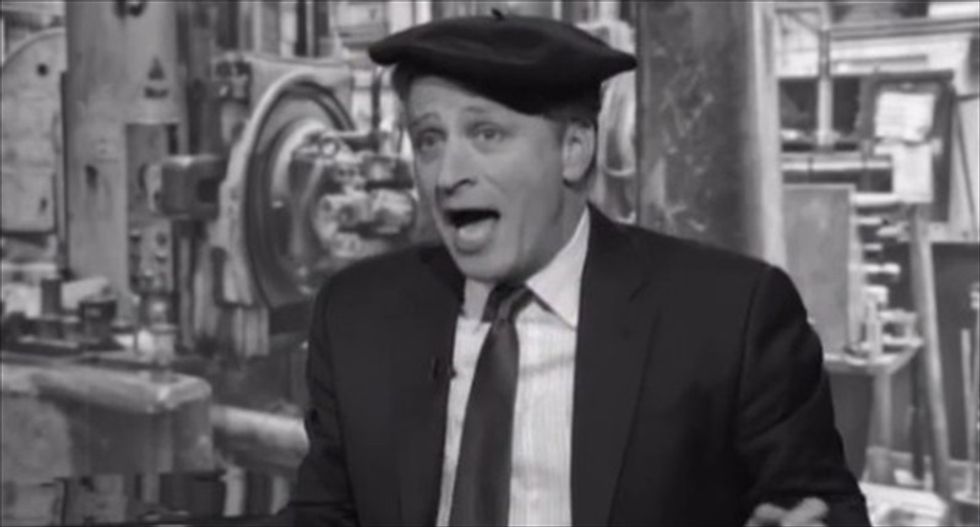 While giving President Barack Obama flack for not attending this weekend's huge rally in Paris, Daily Show host Jon Stewart noted on Monday that some of the nations who did take part hardly have room to talk in condemning attacks on free speech.

"How could the U.S. not be there, when representatives of such beacons of freedom and lack of censorship as journalist-punishing Russia was there?" Stewart asked. "Journalist-jailing Turkey was there. Egypt -- 'nuff said. Palestinian cartoonist-jailing Israel was there. And of course, our greatest ally, Saudi Arabia, was there -- although a little out of breath, having just days ago flogged a blogger."

However, Stewart was still aghast that neither Obama nor any senior members of his administrations joined the 40 world leaders who took part in the event on Sunday, one of several rallies around France designed as a show of unity following the attacks on not only the satirical newspaper Charlie Hebdo, but a Jewish supermarket in Paris. Seventeen people died in the course of the attacks last week.

Stewart was especially frustrated to find out that Attorney General Eric Holder did not attend the event, despite already being in the city on official business.

"What the f*ck?" Stewart asked, before theorizing that Holder was "probably taking advantage of the shortest tourist lines in French history. While the march is going on, [Holder's] just kicking back snapping 'selfies' with the Mona Lisa."

White House spokesperson Josh Earnest conceded on Monday that "someone with a higher profile" should have been sent to represent the U.S. at the march, which drew more than 1 million people, and is estimated to have been the biggest event of its kind in French history.

"It's the world's most powerful game of Red Rover ever," he marveled. "They are daring terrorism to come over."