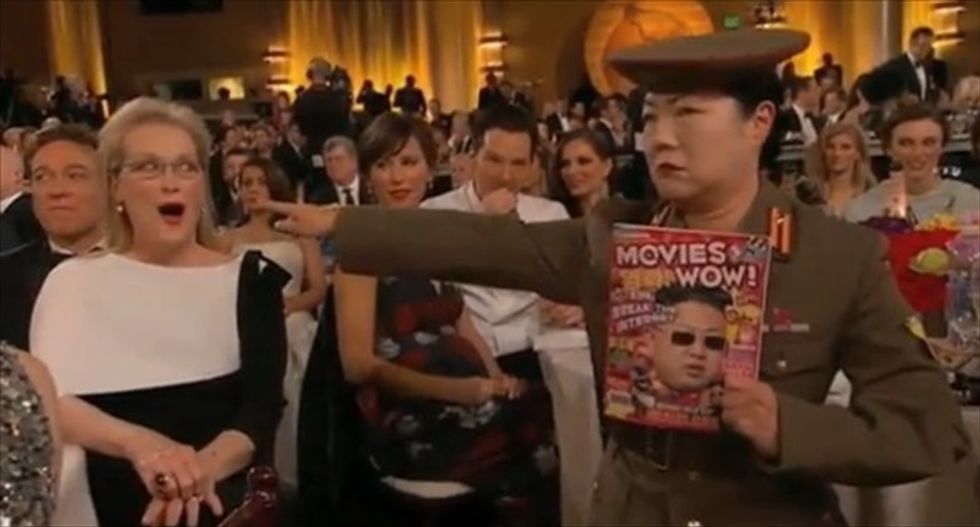 Comedian Margaret Cho fired back at criticism over her portrayal of a "North Korean army general" at Sunday's Golden Globe Awards, saying it fell in line with impersonations she has done of her own family members.

"I can do whatever I want when it comes to Koreans — North Koreans, South Koreans," Cho told Buzzfeed. "I'm not playing the race card, I'm playing the rice card. I'm the only person in the world, probably, that can make these jokes and not be placed in a labor camp."

Cho, playing Gen. "Cho Yung-Ja," was introduced by co-hosts Tina Fey and Amy Poehler as a contributor to a North Korean film magazine and member of the Hollywood Foreign Press Association, which oversees the awards. The magazine, which she brandished with a grimace, had the country's ruler, Kim Jong-Un, on the cover. Cho then silently asked to take a picture with actress Meryl Streep.

Cho appeared later in the show, saying, "In North Korea we know how to put on a show; this is not a show" when Poehler and Fey asked if she was having a good time.

As the Daily Mail reported, Cho was quickly criticized online.

"In that vacuum, Cho's performance became an indiscriminate parody, raising whatever chuckles it did not at the expense of the powerful but by trading in on tired stereotypes of Asians tout court as players of unknowable ego games," Kim wrote.

Cho told Buzzfeed that the "negativity" directed toward her reflected limits other people try to place on Asian-American performers.

"I'm of North and South Korean descent, and I do impressions of my family and my work all the time, and this is just another example of that," she said. "I am from this culture. I am from this tribe. And so I'm able to comment on it."

Footage of Cho's appearance, as posted by The Hollywood Reporter, can be seen below.