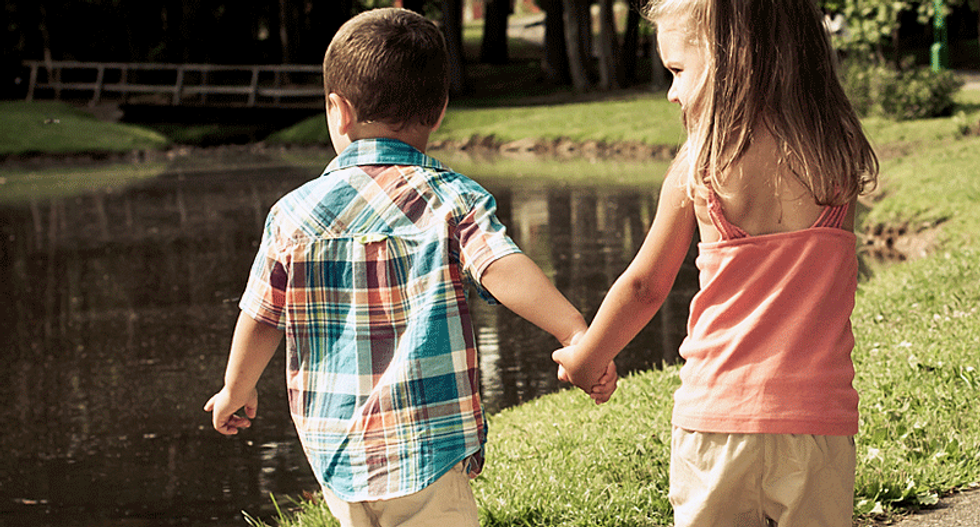 Kids walk around a pond (Shutterstock)

Danielle and Alexander Meitiv say that their neighbors have called the local police and Child Protective Services because their children, ages 10 and 6, have been spotted walking to two area playgrounds without adult supervision. One playground is a mile away from the Meitiv’s home in Silver Springs, while the other is just two blocks down.

In a letter to Reason.com, Danielle Meitiv recalls a December 20 incident involving the police:

"On a Saturday afternoon in December, my husband, Alexander, gave our kids permission to walk home from the local playground. I was out of town at the time. When they'd walked about halfway, a Montgomery County Police patrol car pulled up. A 'helpful' neighbor had called 911 to report unaccompanied children walking outside. Our kids were brought home in a police cruiser.

At the door the police officer asked to see my husband's ID, but did not explain why. When he refused, she called for backup.

A total of six patrol cars showed up."

The Meitivs say that law enforcement authorities and social services representatives have questioned their children while at school, and without their knowledge or consent and that the investigation infringes on their rights as parents to raise their children in a manner that they see fit. The parents also say the authorities asked their 10-year-old son what he would do if seized by a strange adult. According to Alexander Meitiv, they told his son that “there are creeps out there that are just waiting to grab children if they're walking by themselves.”

Since the school visit, Montgomery County Child Protective Services have visited the Meitiv’s at their home and asked them to sign paperwork, which the Meitiv’s said was called a “safety plan" pledging they would not leave their children unsupervised. When the Meitivs refused to sign the papers without it being reviewed by an attorney, they say the case worker announced that they will take their children “right away” and proceeded to contact the local police.

Alexander Meitiv is a physicist with the National Institutes of Health, Danielle is an author and a former climate scientist for the Clean Air Task Force.

State laws in Maryland prohibit children under 8-years of age to be unattended in an automobile or a home, but there are no laws that reference supervision while children outdoors and away from the home. Also, state laws say that a child must be at least aged 13 to supervise a younger child. When asked about Meitiv’s case by USA Today, Child Protective Services refused to talk about it, instead referring the reporter to the state’s laws.

“I grew up in New York City in the ‘70s and nobody hesitated to let their kids walk around. The only thing that’s changed between then and now is fear,” says Danielle.  “The world is actually even safer than when I was a child, and I just want to give them the same freedom and independence that I had — basically an old-fashioned childhood.”

There have been other instances of parents getting into legal trouble for letting their children walk outside without adult supervision. This summer, a single mother in Port St. Lucie, Fla was arrested for letting her son, 7, walk to the park.

In July, a 46-year-old McDonald’s worker and single mother was arrested for letting her 9-year-old daughter play at a local playground while she worked during the day.

Debra Harrell was arrested after other parents observed her daughter playing without supervision and called police. Harrell was charged with unlawful conduct toward a child, a felony in South Carolina. Evidently, Harrell didn't have the money to pay for a nanny.

The website Free Range Kids cites many other incidents of overreach by Protective Services workers when responding to incidents when children are outdoors and playing while unsupervised by  an adult.

“CPS is applying legal standards that are hopelessly vague, and erring on the side of 'safety,' by removing many children each year from families who have not mistreated them, and who have not come to harm, but who are nonetheless deemed to be ‘at risk,’” says author Lenore Skenazy, a former New York Daily News columnist who runs the Free Range Kids website.

See the video from USA Today: