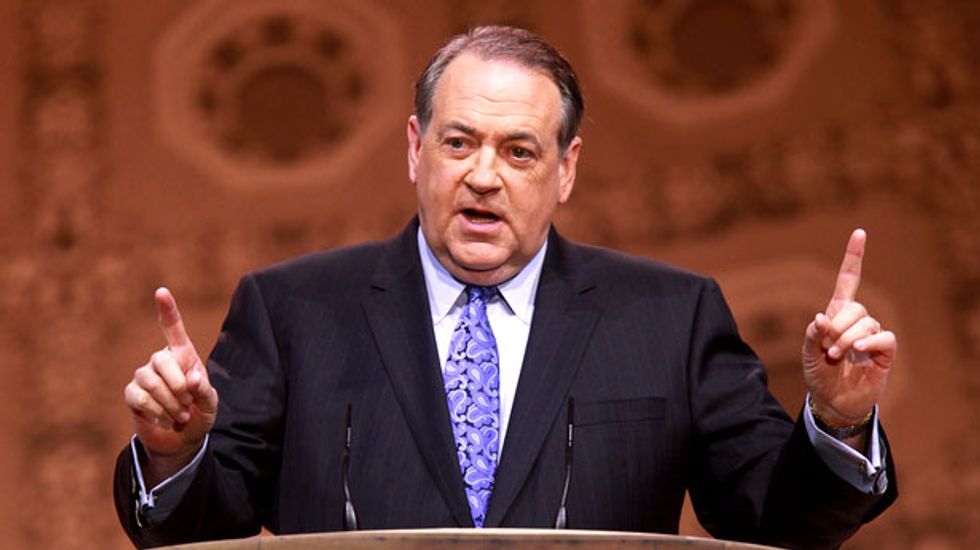 Former Fox News host Mike Huckabee said on Thursday that if he were elected president then he would have "God's blessing" to fight a so-called "secular theocracy" that had been imposed by atheists.

During an appearance on the Christian Life Today program, Huckabee told televangelist James Robinson that he was considering a 2016 presidential bid because the country needed to become a "God-centered nation that understands that our laws do not come from man, they come from God."

"It's the natural law of God," the former Arkansas governor said, adding that he was not calling for a theocracy.

"We have a theocracy right now," Robinson interrupted. "It's a secular theocracy."

"That's it," Huckabee agreed. "It's a humanistic, atheistic, even antagonistic toward Christian faith. And that's what we need to understand. Our basic, fundamental rights are being robbed from us, taken from us piece by piece."

At the conclusion of the program, Robinson said that people should pray that whoever was president would "keep God in the center of their focal point."

"Absolutely," Huckabee remarked. "And whether it's me or someone else, and I do ask people to pray. For me, this is not just a political or financial decision, it is a spiritual decision."