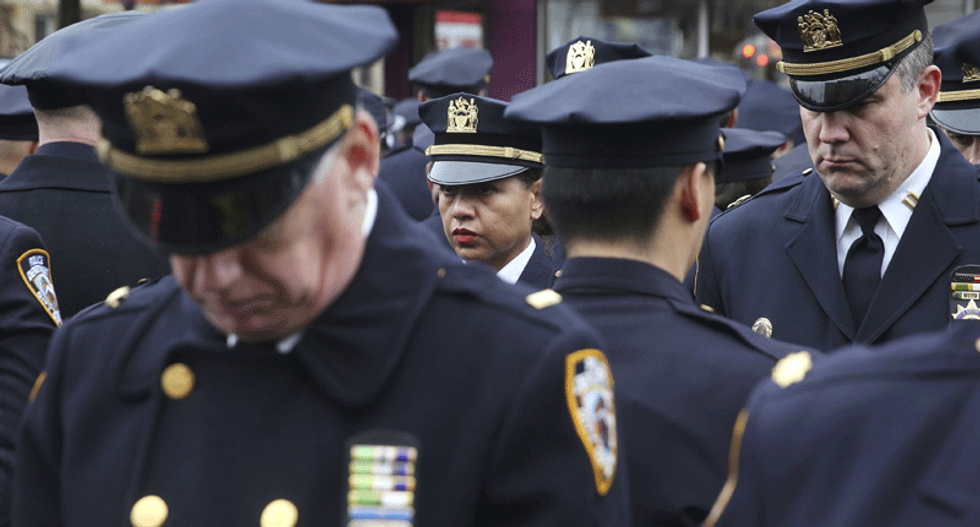 Law enforcement officers stand, with some turning their backs, as New York City Mayor Bill de Blasio speaks on a monitor outside the funeral for NYPD officer Wenjian Liu in the Brooklyn borough of New York January 4, 2015. (REUTERS/Shannon Stapleton)

UPDATE: I wrote this on Friday. Sunday, hundreds of NYPD, once again, disrespected the families of the slain officers by turning the funeral of officer Wenjian Liu into a political spectacle by turning their backs on Mayor Bill de Blasio. Instead of honoring Liu, they chose to protest De Blasio. This time they also explicitly defied the wishes of Police New York Police Commissioner William Bratton, who stated in a memo “A hero’s funeral is about grieving, not grievance.”

Too many police leaders and politicians have responded to the recent tragic double murder of Officers Wenjian Liu and Rafael Ramos by blaming Barack Obama, Bill de Blasio, and peaceful police brutality protestors. At the same time, they refuse to acknowledge, let alone condemn, the police violence and brutality that have claimed the lives of countless people, including Eric Garner and Michael Brown.

This New Year's, a good resolution for these professional pugilists would be to learn from the very families who have lost their loved ones to police brutality. The families of Michael Brown and, Eric Garner, in particular, would be good to study. While grieving their own losses, they have been able to extend condolences and sympathy to the grieving families of officers Lui and Ramos. And they have condemned violence in any form.

The family of Michael Brown released the following statement:

The family of Michael Brown condemns today’s senseless killing of two NYPD officers. We reject any kind of violence directed toward members of law enforcement. It cannot be tolerated. We must work together to bring peace to our communities. Our thoughts and prayers go out to the officers’ families during this incredibly difficult time.

The mother, wife and daughter of Eric Garner also offered their condolences and rejected violence. [statement starts at 3:40]

We are going in peace, and anyone who’s standing with us, we want you to not use Eric Garner’s name for violence, because we are not about that. These two police officers lost their lives senselessly, and our condolences to the families, and we stand with the families.

I just want to express my condolences and heartfelt sadness for these two officers and their family. I know what they’re going through to lose a loved one right before the holidays and everything. It’s so sad, and I would ask that everyone that is protesting with us, please protest in a nonviolent way. My husband was not a violent man, so we don’t want any violence connected to his name.

Garner's youngest daughter, Emerald Snipes-Garner, 22, visited a makeshift memorial where the two police officers were killed and also visited the family of officer Ramos. She explained,

It hit my heart because I know what it feels like, with this upcoming season and you don’t have your father around, I know firsthand what you’re feeling.... And I just want everyone to know that we have to pray for the mental health of the activists and people. … And you know, I want to let everyone know that we have to be peaceful. My father wasn’t a violent man. He was very peaceful. There are ways that you can do things without letting tragedies happen.

My message here is to keep everything peaceful. We stand together as one. This country is — we are all one. We are not divided. We’re not separating. We’re all standing together. There will be continued peaceful protesting. I believe that everyone will keep it peaceful and protest in the right manner.

Compare this compassionate response to the response of Darren Wilson. During an interview with ABC's George Stephanopoulos, Darren Wilson, the Ferguson police officer who murdered Michael Brown, showed no remorse:

Stephanopoulos: Is there anything you could have done differently that would have prevented that killing from taking place?

.... Stephanopoulos: Is it something that you think will always haunt you?

Wilson: I don’t think it’s haunting. It’s always going to be something that happened.

Let us, for the sake of argument, accept Wilson's ludicrous version of the events--that he thought Brown was armed and feared for his life. A normal person, upon realizing that he has killed an unarmed teenager, would see the death as more than just "something that happened."

Nor has Wilson apologized to Michael Brown's family.

What about Officer Joe Pantaleo, who killed Eric Garner in an illegal chokehold banned by the NYPD, ruled by the medical examiner as a homicide?  "It is never my intention to hurt anyone and I feel very bad about the death of Mr. Garner... My family and I include him and his family in our prayers and I hope they will accept my personal condolences for their loss." This apology was only released after the grand jury decided not to indict Pantaleo and it is hardly an apology for doing anything wrong.

The president of the Patrolmen’s Benevolent Association police union (PBA), Patrick Lynch did even worse. Lynch insisted Garner wasn't killed by a chokehold and described the medical examiner's report which ruled the death a homicide, as "absolutely wrong. It is not a chokehold. It was bringing a person to the ground the way we're trained to do to place him under arrest."

And Rep. Peter King (R-NY) stated Garner was responsible: "You had a 350-pound person who was resisting arrest... If he had not had asthma and a heart condition and was so obese, he almost definitely would not have died from this."

The double police murder of December 20 requires no fancy detective work to get to the obvious facts. Ismaaiyl Brinsley wasn’t from New York, wasn't part of the Black Lives Matter movement (anti-violent from the start), had shot his girlfriend earlier in the day, and had a history of mental illness which included suicide attempts.