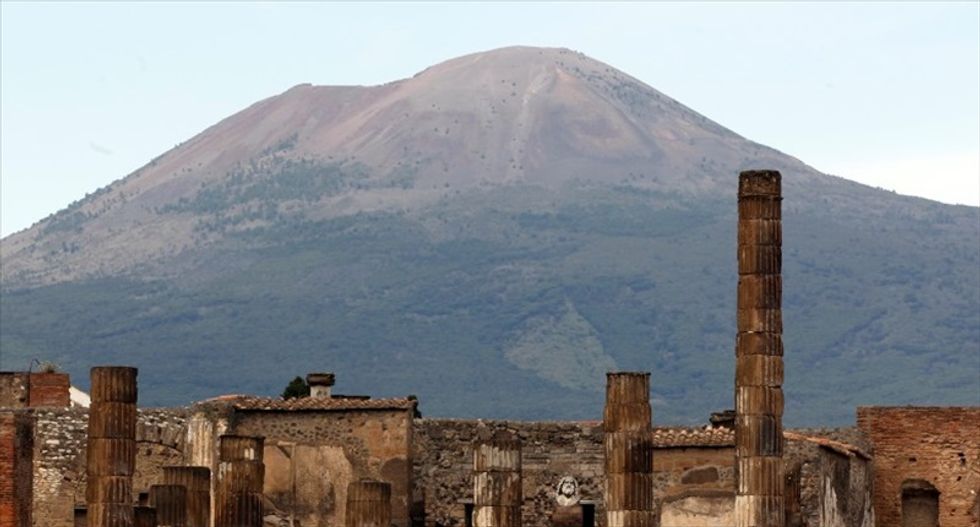 A partial view of the ancient archaeological site of Pompeii is pictured in front of Mount Vesuvius on April 17, 2014. Photo by Ciro de Luca for Reuters.

The contents of hundreds of papyrus scrolls that were turned into charcoal in the eruption of Italy's Mount Vesuvius in 79 AD - one of the great natural disasters of antiquity - have long remained a mystery. That soon may change.

Scientists said on Tuesday a sophisticated form of X-ray technology has enabled them to decipher some of the writing in the charred scrolls from a library once housed in a sumptuous villa in ancient Herculaneum, a city that overlooked the Bay of Naples.

The library was part of what's called the Villa of the Papyri, which may have belonged to Julius Caesar's father-in-law. Other libraries from antiquity have been discovered but this is the only one that had its scrolls still present.

Along with its sister city Pompeii, Herculaneum was buried by the eruption. The scrolls were carbonized by a blast of hot volcanic gas, ending up looking like burned logs.

Roughly 1,800 of the delicate and brittle scrolls were unearthed in the 1750s. Some have been deciphered. Most have not. Methods used over the years to unroll them or separate their layers have destroyed many.

Carbonized papyrus and the black charcoal ink used in the scrolls have very similar compositions, making it tough to make out the writing using even advanced scanning methods. But these researchers used a technology similar to CT scans, called X-ray Phase Contrast Tomography, to decipher the writing while leaving the scroll rolled up.

"They are extremely fragile because they are, more or less, only pieces of charcoal," said Emmanuel Brun of the European Synchrotron Radiation Facility in Grenoble and Ludwig Maximilians University in Munich, who helped lead the study.

The method was used on one intact charred scroll as well as scroll fragments, added Vito Mocella of the Institute for Microelectronics and Microsystems, part of the National Council of Research in Naples.

The researchers determined the writing was in ancient Greek and the intact scroll may be a text written by 1st century BC philosopher Philodemus.

While this study was not intended to reveal the scrolls' full contents, Mocella said there are plans to use the technology to decipher the hundreds of remaining scrolls. Experts have hoped these may contain famous lost ancient works.

"We're very excited about this possibility because we know the immense value for the study of ancient Greek and Latin civilization," Mocella said.

The intact scroll used in the study, published in the journal Nature Communications, was given to Napoleon Bonaparte as a gift in 1802, Brun said.