Shep Smith: States fighting marriage equality are the same ones that opposed integration 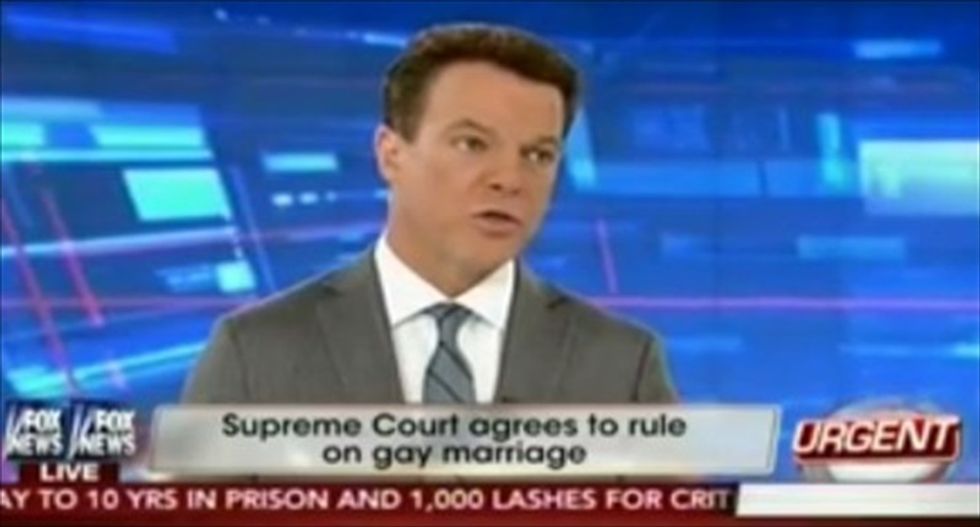 With the Supreme Court seemingly poised to settle the legal question regarding same-sex marriages once and for all, Fox News host Shepard Smith argued on Friday that the issue parallels that of civil rights for communities of color.

"Not in every case, but in most cases, the same states which were fighting integration are fighting this as well," Smith told Wall Street Journal associate editor John Bussey. "Those states which always seem to be behind the curve for reasons which are explainable and understandable. Those are the places where this is gonna turn out to be the most difficult, especially if the Supreme Court stays with what has seemed to be a trend toward inclusion and away from discrimination."

As Reuters reported earlier in the day, the high court is expected to rule in June on cases involving marriage equality bans in Kentucky, Michigan, Ohio, and Tennessee. The decision will address both the rights of same-sex couples to marry and their right to have their unions recognized in other states.

Only 14 states currently have marriage equality bans in effect. Similar bans in 25 other states have been found unconstitutional, most of them in the aftermath from the high court's June 2013 ruling gutting the federal Defense of Marriage Act and California's Proposition 8.

"There's still disagreement on this issue within the American population," Bussey said.

Bussey argued that the move toward accepting same-sex marriages was driven in part after businesses were lobbied to allow employees in same-sex partnerships to qualify for the same benefits as a heterosexual married couple.

"As a result of that, a certain amount of acceptance occurred within the business community, within the workplace, and that filtered out into society in general," he said. "So you've seen a really remarkable shift in public sentiment on this issue."

States like Alabama, Arkansas, and Texas, where laws against same-sex marriages are still active, also actively fought against the court's ruling in Brown v. Board of Education ending school desegregation in 1954. For example, segregationist Alabama Gov. George Wallace (D) captured national attention when he stood in a schoolhouse door to oppose the inclusion of Black students at the University of Alabama.

Watch the segment, as posted by Media Matters on Friday, below.