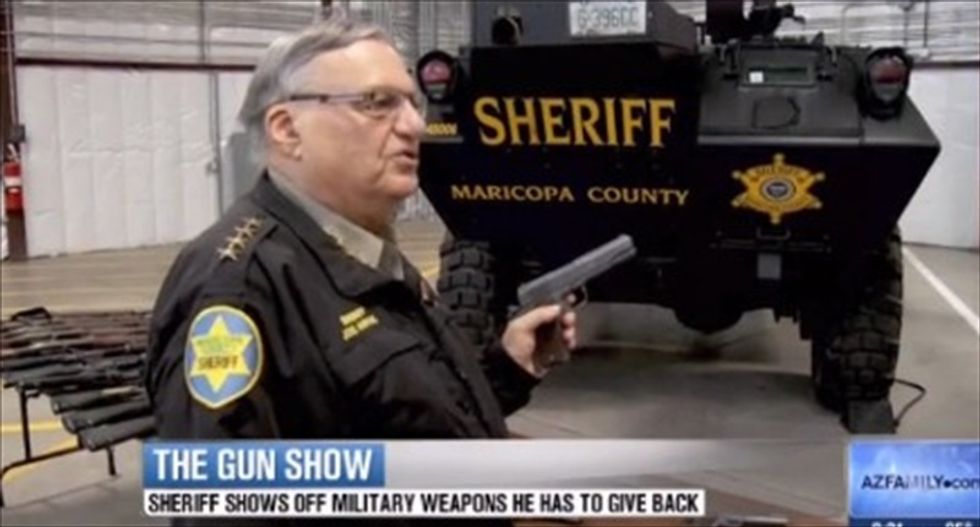 Arpaio County Sheriff Joe Arpaio recently called on civil rights activists Al Sharpton to undergo police training scenarios where he would have to kill or be killed in situations like the one Officer Darren Wilson allegedly faced when he fatally shot Michael Brown.

Last week, KSAZ broadcast a story about phoenix activist Jarrett Maupin, who had led several anti-police brutality tests, but then accepted an offer to take a "training" course from the Maricopa County Sheriff's Office.

During the so-called training, Maupin was offered the choice of either shooting a suspect approaching on the street or of possibly being killed. Given those choices, Maupin came away from the day saying that "people need to comply with police orders for their own sake."

Arpaio said on Friday that he hoped to convert Sharpton into a fan of police tactics by inviting him to through the same scenarios.

"Let's come on down here, I think you are the prime guy to do this and learn a lesson," the sheriff told KSAZ. "Yeah, Al I haven't seen you in a while, we could talk in my office and we'll put you through the scenario. We had two cops who were killed in New York City, assassinated."

"So why doesn't he come down here and go through the scenario we did a couple of nights ago, it would be good for him to come?" Arpaio added.

In a statement, Sharpton said that he was "for working with the Sheriff to try to find some ground on proper policing."

While conservatives have pointed to Maupin's training as evidence that activists are wrong to protest against police abuses, some experts have said that the so-called training exercise is nothing more than a propaganda scam.

"In essence, they took a citizen off the street with virtually no training, offered them no backup or less-than-lethal force options with which to stop someone, but want to sell this to the public as 'what officers are facing'," The Free Thought Project's Jay Syrmopoulos wrote. "The more critical thinking one does about the video and the scenarios the more disillusioned one becomes at the farcical nature of this propaganda piece."

"The profession of law enforcement is difficult at times, but the excessive brainwashing on a daily basis taking place, that you may die, is too extreme and gives many the belief it is OK to use deadly force. In many of these situations, Tamir Rice or Andy Lopez comes to mind, these officer’s just wanted to plain shoot and kill."

Former LAPD Officer Alex Salazar called the training a "brainwashing mechanism to get you over to their side, to start thinking about killing."

"The profession of law enforcement is difficult at times, but the excessive brainwashing on a daily basis taking place, that you may die, is too extreme and gives many the belief it is OK to use deadly force," Salazar explained. "In many of these situations, Tamir Rice or Andy Lopez comes to mind, these officer’s just wanted to plain shoot and kill."