Sheriff lashes out at NAACP: 'Number one cause' of police shootings is black single mother homes 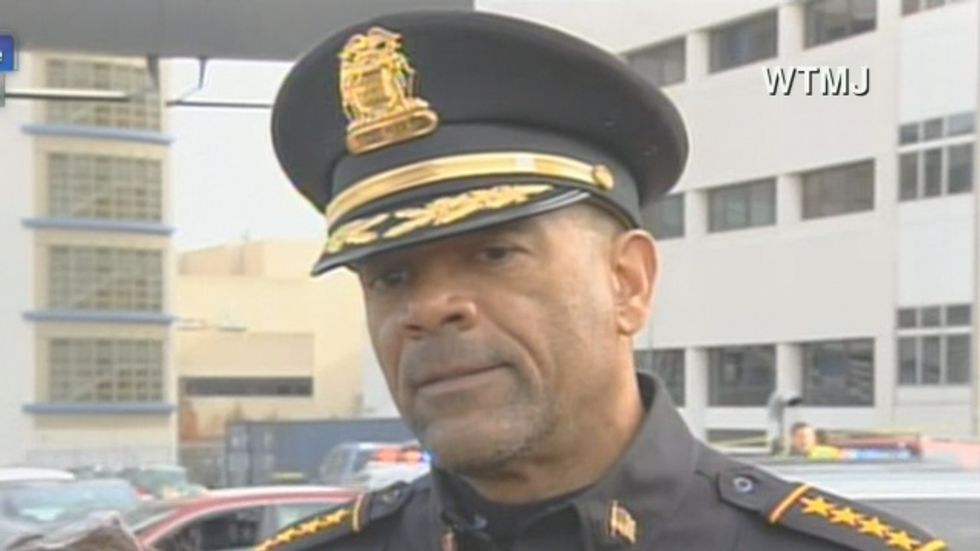 David Clarke, sheriff of Milwaukee County in Wisconsin, asserted on Tuesday that the NAACP was wrong to blame police for shooting black men when the problem was homes with single mothers.

A body camera recording released last week showed an Muskogee police officer in Oklahoma fatally shoot a fleeing suspect, Terrance Walker, who dropped and then picked up a gun as he ran.

"I think emphasis should be placed on trying to take those people alive," Thompson said.

On Tuesday's edition of Fox & Friends, Sheriff Clarke argued that the NAACP should be focusing on black men instead of the police.

"This once proud organization that was a force for good has relegated itself into irrelevancy, and I challenge anybody to name the last significant accomplishment that the NAACP has achieved in the United States for people of color," Clarke opined. "This organization has become nothing more than a political propaganda entity for the left."

The sheriff recommended that the NAACP start a discussion in the black community about "the behavior of our young black men."

"The discussion we need to be having and the NAACP can lead it -- stay off the police -- is why is the stuff happening, and what are we going to do about it," he continued. "The number one cause of this is father-absent homes. So what are we going to do in terms of having more effective parenting, more role modeling, more engaged fathers in the lives of these young black men so that we don't have this behavior."

Fox News host Brian Kilmeade pointed out that Terrance Walker's mother said that officers did not have to shoot her son as he ran away.

"Well, what did his dad say?" Clarke laughed. "You know, we always hear what his mom says. You know, look, mom loves her son, we all get that. But shoot first and ask questions later -- anytime a law enforcement officer is in a situation where a gun is introduced by a suspect, yeah, it's shoot first, stop the threat, and then ask questions later."

"And also, when you run from the police, I'll tell you right now, you're headed toward a very dark place where things are not going to go well for you," he added. "That doesn't mean that you're automatically going to be shot and you should die. But the fact is, that is one of the most dangerous situations an officer can be involved in."

Clarke concluded by calling the shooting "unfortunate," but he said that the NAACP needed to "focus on the behavior of our young black men, and not the police."