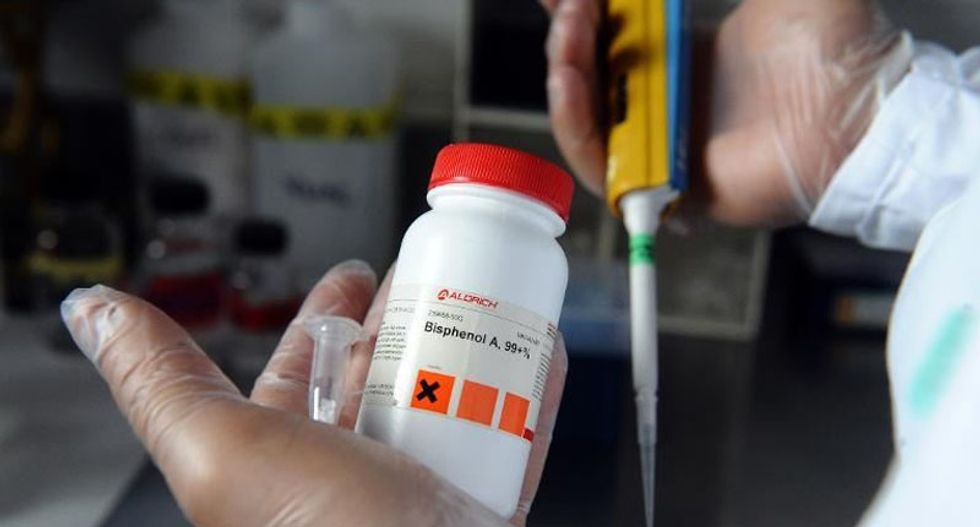 A scientist holds a flask containing the chemical Bisphenol-A on October 9, 2012 at a research institute in Toulouse, France (AFP)

Two substitutes for bisphenol A, a plastic ingredient banned in some countries over health fears, are also a source of concern, French researchers warned Thursday.

The chemical compounds bisphenol F and S may impair testicle development in foetuses, the team wrote in the journal Fertility and Sterility.

"Any reduction in testosterone production, as caused by these types of bisphenol, will affect normal (testes) development," possibly resulting in sterility, study co-author Rene Habert from the Paris Diderot University told AFP.

Bisphenol A, or BPA, is a common component of plastic bottles and the linings of food cans.

Some studies have linked it to brain and nervous system problems, reproductive disorders and obesity.

A study in 2013 said it may expose unborn children to breast cancer later in life.

The substance has been banned for use in baby bottles by the European Union, United States and Canada, and from all food containers in France from the beginning of this year.

Bisphenol F and S have started to replace bisphenol A in some products.

"But while their chemical structure is very similar to that of bisphenol A, their potential harm has never been tested in humans or other mammals, and they are not subject to regulation," said a statement from the university, the French Institute of Health and Medical Research (Inserm) and France's Atomic Energy Commission, which also does non-nuclear research.

The research entailed observing the effects of the chemicals on foetal testicle tissue in a lab dish.

The method was used in 2012 to determine that BPA also presented a risk for male fertility.

"This is the first study to show a negative physiological effect of bisphenol S and F on humans," said the statement.

The United States has said it would not impose a general ban on BPA as there was no evidence of harm to adults.