Melbourne, the southernmost state capital of the Australian mainland, was established by Europeans a couple hundred years ago at the juncture of a great river and a wind-whipped bay. Port Phillip Bay sprawls over 750 square miles, providing feeding grounds for whales and sheltering coastlines for brine-scented beach towns. But it’s an exceptionally shallow waterway, less than 30 feet in most places. It’s so shallow that 10,000 years ago, when ice sheets and glaciers held far more of the planet’s water than is the case today, most of the bay floor was high and dry and grazed upon by kangaroos.

To most of us, the rush of the oceans that followed the last ice age seems like a prehistoric epoch. But the historic occasion was dutifully recorded — coast to coast — by the original inhabitants of the land Down Under. 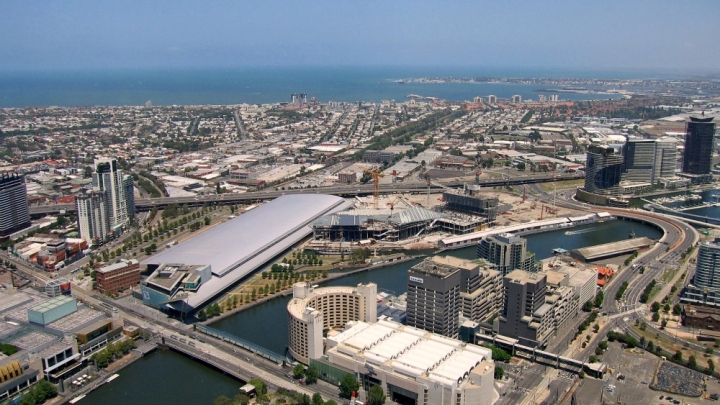 The Yarra River passes through Melbourne, then empties into Port Phillip Bay — which didn’t exist during the last ice age.
Credit: Tim Keegan/Flickr

Without using written languages, Australian tribes passed memories of life before, and during, post-glacial shoreline inundations through hundreds of generations as high-fidelity oral history. Some tribes can still point to islands that no longer exist — and provide their original names.

That’s the conclusion of linguists and a geographer, who have together identified 18 Aboriginal stories — many of which were transcribed by early settlers before the tribes that told them succumbed to murderous and disease-spreading immigrants from afar — that they say accurately described geographical features that predated the last post-ice age rising of the seas.

“It’s quite gobsmacking to think that a story could be told for 10,000 years,” Nicholas Reid, a linguist at Australia’s University of New England specializing in Aboriginal Australian languages, said. “It’s almost unimaginable that people would transmit stories about things like islands that are currently underwater accurately across 400 generations.”

How could such tales survive hundreds of generations without being written down? 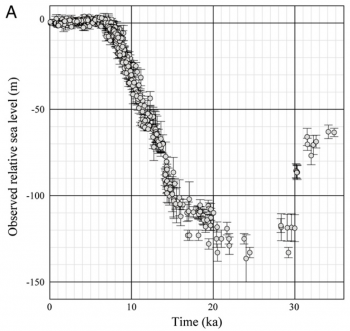 The Australian National University led research, published in September in the Proceedings of the National Academy of Sciences, that tracked prehistoric changes in sea levels. The study included this figure, showing the oceans rising more than 100 meters (330 feet) during the past 20,000 years.
Credit: PNAS

“There are aspects of storytelling in Australia that involved kin-based responsibilities to tell the stories accurately,” Reid said. That rigor provided “cross-generational scaffolding” that “can keep a story true.”

Reid and a fellow linguist teamed up with Patrick Nunn, a geography professor at the University of the Sunshine Coast. They combed through documented Aboriginal Australian stories for tales describing times when sea levels were lower than today. The team analyzed the contours of the land where the stories were told and used scientific reconstructions of prehistoric sea levels to date the origins of each of the stories — back to times when fewer than 10 million people were thought to have inhabited the planet.

Nunn has drafted a paper describing sea level rise history in the 18 identified Aboriginal Australian stories, which he plans to publish in a peer-reviewed journal. He’s also scouring the globe for similar examples of stories that describe ancient environmental change.

“There’s a comparably old tradition among the Klamath of Oregon that must be at least 7,700 years old – it refers to the last eruption of Mount Mazama, which formed Crater Lake,” Nunn said. “I’m also working on ancient inundation stories and myths from India, and I’ve been trying to stimulate some interest among Asian scholars.”

The highlights of the results of the trio’s preliminary analysis of six of the ancient Australian tales was presented during an indigenous language conference in Japan. The stories describe permanent coastal flooding. In some cases, they describe times when dry land occupied space now submerged by water. In others, they tell of wading out to islands that can now only be reached by boat.

“This paper makes the case that endangered Indigenous languages can be repositories for factual knowledge across time depths far greater than previously imagined,” the researchers wrote in their paper, “forcing a rethink of the ways in which such traditions have been dismissed.” 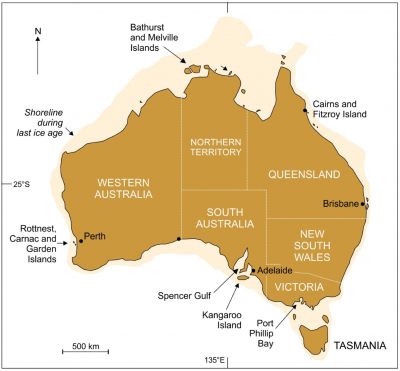 Numerous tribes described a time when the bay was mostly dry land. An 1859 report produced for the state government described tribal descendants recalling when the bay “was a kangaroo ground.” The author of that report wrote that the descendents would tell him, “Plenty catch kangaroo and plenty catch opossum there.” The researchers determined that these stories recount a time when seas were about 30 feet higher than today, suggesting that the stories are 7,800 to 9,350 years old.

The Ngarrindjeri people tell stories of Ngurunderi, an ancestral character steeped in mythology. In one of their stories, Ngurunderi chased his wives until they sought refuge by fleeing to Kangaroo Island — which they could do mostly by foot. Ngurunderi angrily rose the seas, turning the women into rocks that now jut out of the water between the island and the mainland. Assuming this dark tale is based on true geographical changes, it originated at a time when seas were about 100 feet lower than they are today, which would date the story at 9,800 to 10,650 years ago.

A story told by the Tiwi people describes the mythological creation of Bathurst and Melville islands off Australia’s northern coastline, where they live. An old woman is said to have crawled between the islands, followed by a flow of water. The story is interpreted as the settling of what now are islands, followed by subsequent flooding around them, which the researchers calculate would have occurred 8,200 to 9,650 years ago. 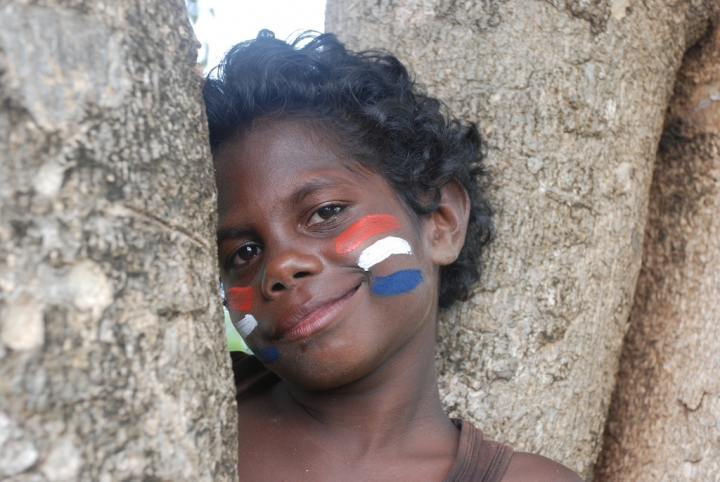 An early European settler described Aboriginal stories telling how these islands, which can still be viewed from the shores of Perth or Fremantle, “once formed part of the mainland, and that the intervening ground was thickly covered with trees.” According to at least one story, the trees caught fire, burning “with such intensity that the ground split asunder with a great noise, and the sea rushed in between, cutting off these islands from the mainland.” Based on the region’s bathymetry, the researchers dated the story back 7,500 to 8,900 years ago.

Stories by the original residents of Australia’s northeastern coastline tell of a time when the shoreline stretched so far out that it abbuted the Great Barrier Reef. The stories tell of a river that entered the sea at what is now Fitzroy Island. The great gulf between today’s shoreline and the reef suggests that the stories tell of a time when seas were more than 200 feet lower than they are today, placing the story’s roots at as many as 12,600 years ago.

Spencer Gulf was once a floodplain lined with freshwater lagoons, according to the stories told by the Narrangga people. Depending on which parts of the large inlet near Adelaide that are referred to by the stories, they could be between 9,550 and 12,450 years old.

In a column for the New York Times, Nobel Prize-winning economist Paul Krugman pondered why Donald Trump is once again ramping up his anti-mask rhetoric at a time when his health care advisors are urging the public to keep wearing the protective coverings. He then concluded it is nothing less than a cynical political maneuver by the president that will likely lead to more deaths.

Earlier this week the head of the CDC urged Americans to keep using masks, saying it was their best defense against becoming infected with COVID-19 only to have the president undercut that message on the same day.

Trump’s campaign knows Arizona and Michigan have ‘slipped’ and ‘may be unrecoverable’: reporter

Politico reporter Tim Alberta, a former National Review writer who is deeply sourced in the world of Republican politics, believes that President Donald Trump's campaign knows that it is quickly losing ground in two key swing states as it heads into the final stretch of the 2020 presidential election.

Writing on Twitter, Alberta says that Michigan and Arizona are two states that "Trump World knows have slipped, and may be unrecoverable" for the campaign. Additionally, he believes that Wisconsin, another state that Trump won unexpectedly in 2016, "isn't far behind."

This week President Trump described the work of the legendary historian Howard Zinn, who died in 2010, as “propaganda” meant to “make students ashamed of their own history.” But Zinn believed the opposite, that teaching the unvarnished truth about history was the best way to combat propaganda and unexamined received wisdom. We air excerpts from a 2009 interview with Zinn in which he explained his approach to education. “We should be honest with young people; we should not deceive them. We should be honest about the history of our country,” Zinn said.

Trump’s campaign knows Arizona and Michigan have ‘slipped’ and ‘may be unrecoverable’: reporter

Even Trump’s own health care advisers know nothing about the ‘mythical’ health care plan he brags about: columnist

Bill Barr’s friends aren’t sure if he’s just a liar or delusional: ‘He’s been substantially influenced by right-wing media’

‘The White House is panicking’: Ex-Trump official says president is freaking out about latest defection