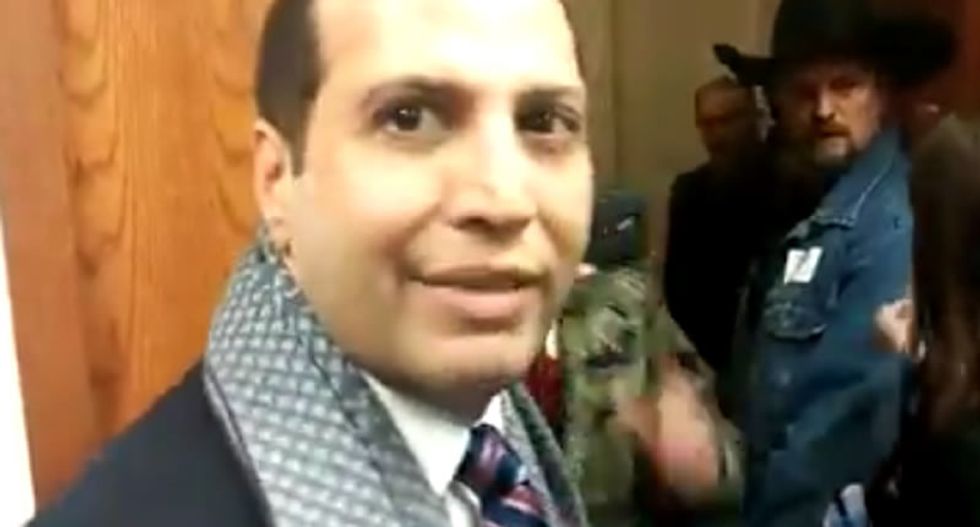 In the wake of increasingly large and frequent protests by the open carry movement, the Texas House of Representatives approved rules that would allow for the installation of panic buttons and give representatives the power to have "hostile" citizens summarily ejected from their offices, The Houston Chronicle reports.

The day before these rules were passed, members of Open Carry Tarrant County spent time visiting the offices of lawmakers who opposed House Bill 195, which would overturn the state's 125-year-long ban on openly carrying handguns.

In the video, activists can be heard berating the seated representative. "You're a tyrant to the Constitution!" one yelled. "You won't be here very long!" shouted another.

"You need to leave my state," Watkins replied.

When the representative attempted to retreat into his office, the activist placed his foot in the door to prevent him from doing so.

Watkins replied to criticism of that particular action on Facebook, writing that "[i]f a foot in the door of a tyrant's office bothers you more than a tyrant mocking the people and the Constitution, you are the problem." He then added, "[w]onder how the Jews turned out begging Hitler for their rights back. Maybe they should have put their foot in the door!"

Upon being contacted for comment about the rules that would allow for the installation of panic buttons and ejection of protesters, Watkins posted the following on Facebook:

Rep. Martinez Fischer, who is sponsoring the new rules, said that it "sounded to me like it was a very hostile situation that not only impacted the offices' environment, but also bled out into the hallway -- and I don't think any of that is appropriate."