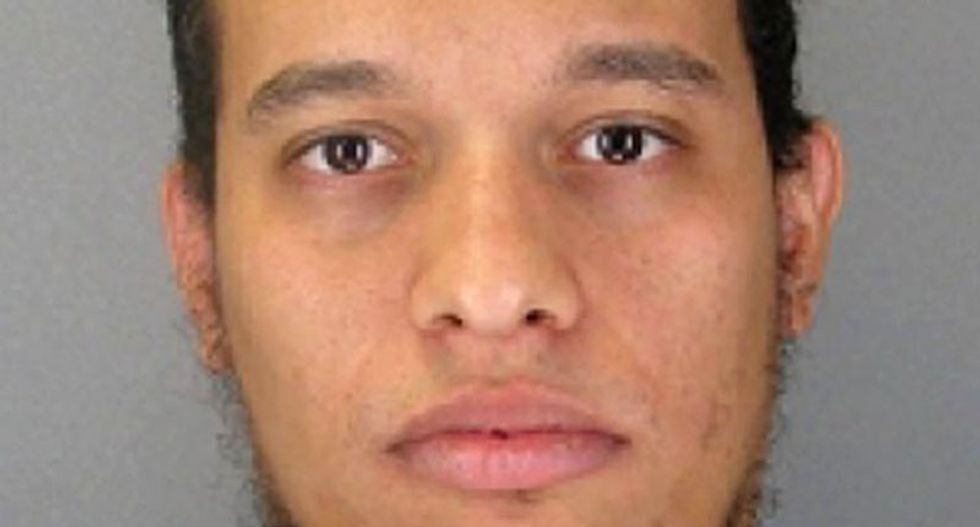 Said Kouachi, aged 34, is seen in this photo released by French Police in Paris early on January 8, 2015 (AFP)

The path is well-trodden: from a tough housing estate in a western city, through a scruffy, colourful, traffic-choked capital 3,500 miles away, on to one of the country’s religious schools, and eventually into a violent extremist organisation.

The journey has been made by thousands of young western Muslim men over the two decades or more that contemporary Islamic militancy has posed a deadly international threat. Many are converts, including some of the most wanted militants today. Some are followers, rather than leaders. Some are already committed to an extremist agenda, even if they have yet to act. Many return with a dogmatic, sometimes hate-filled, world view, but remain non-violent. Others return with the skills and contacts necessary to implement their, or their new leaders’, ambitions to kill and maim.

This weekend at least one new name, probably two, have been added to the list: Chérif and Saïd Kouachi, the brothers who killed 12 people in the Paris offices of satirical magazine Charlie Hebdo last week. Details of the Kouachis’ travels are still unclear but it appears both spent time in Yemen over the past five years.

Speaking to French TV channel BFM on Friday afternoon, as police commandoes prepared for the final assault, Chérif, 32, said he had travelled to Yemen in 2011. His expenses were paid by the American-Yemeni extremist preacher Anwar al-Awlaki, who was influential within al-Qaida in the Arabian Peninsula (Aqap) and one of the most popular radical propagandists in the world. “It was a while ago, before al-Awlaki was killed,” he told BFM. Al-Awlaki died in a suspected US drone strike in September 2011.

Saïd, 34, had also travelled to Yemen, attending the Iman University, which is headed by fundamentalist preacher Abdel Majeed al-Zindani, whose name figures on a US terror blacklist, according to a former Yemeni classmate interviewed by AFP. The classmate said he had lost track of Saïd between 2010 and 2013, when local rebel Houthi militiamen, who are from the Shia minority strand of Islam, overran a religious school in the small town of Dammaj, to the north of the capital Sa’ana, run by conservatives from the Sunni majority. The school, well- known in jihadi circles and to security agencies, was a destination for hundreds of foreigners, former students have said.

John Walker Lindh, the “American Taliban” captured in Afghanistan in December 2001, may have spent time there during his radicalisation. Morten Storm , a Danish convert deeply involved in Aqap before becoming a spy for western intelligence services, described finding 300 young men “with the ardent expression of those who had found righteousness” when he studied at the school. In 2008 French intelligence told the Observer the school was a favourite destination for 200 or 300 young hardline Muslims from France who travelled for religious instruction each year. Two men from west London were killed fighting in sectarian clashes close to the school in 2012.

US officials believe Chérif, a former pizza deliverer, also received training in small arms and basic tactics from Aqap at this time. But the brothers differ from men such as Lindh or Storm in that they had previous deep links with extremists. Chérif was jailed for his role in a network funnelling volunteer fighters to Iraq between 2003 and 2005, and both brothers were investigated for another plot in 2010, around the time they were travelling to the Yemen.

Aqap, formed from the merger of groups in Yemen and neighbouring Saudi Arabia, is the al-Qaida affiliate with the most established track record of efforts to strike the west, though so far these have targeted aeroplanes. The group’s most senior bomb-maker is one of the most wanted militants active today.

Chérif told BFM he had been sent back to France by Aqap to execute attacks, and the organisation on Friday claimed responsibility for “directing operations” against a target “chosen carefully as revenge for the honour of the prophet”.

However the degree to which the Yemen-based group might have controlled the brothers on their return is unclear. Amedy Coulibaly, suspect in the Parish Jewish supermarket siege, told BFM in a separate interview on Friday afternoon that he had coordinated with the Kouachis only “at the beginning”, and said he had been sent by Islamic State, the militant organisation which has seized tracts of Syria and Iraq and is now the focus of a multinational US-led military campaign.

The Paris attack was far less ambitious than the mass-casualty bombings that were once al-Qaida’s hallmark and are known still to be its aim. But the emerging links to Yemen indicate the continuing threat posed by a combination that is unique to the past decade. There are the lawless zones of conflict in the Islamic world where extremist groups committed to violence against the west and against other Muslims have survived, as in Yemen, and thrived, as in Syria. There are the marginalised second- or third-generation youth in European countries at a time of social and economic stress who have access, via the internet, to extremist propaganda and to extremists themselves. There is cheap air travel. And, finally, there is a violent extremist ideology which has proved tenacious and deeply rooted.