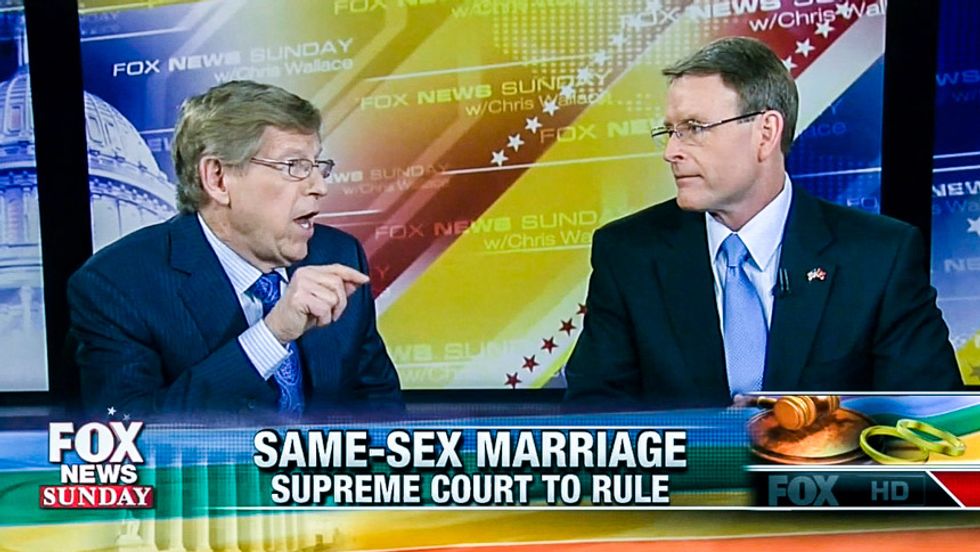 On Friday, the Supreme Court said that it would decide by June if LGBT Americans had a constitutional right to marry.

Fox News host Shannon Bream pointed out to Perkins on Sunday that more than 70 percent of Americans already lived in states where same-sex marriage was legal.

However, Perkins noted that voters had only voted to legalize gay marriage in three states.

"Two-thirds of the states, people live in states where the voters or the legislatures have affirmed the natural definition of marriage," Perkins explained. "So, we're hopeful that the court will side with the American people, and the majority of voters who have been very clear in the last two decades that marriage is the union of a man and a woman, and they will side with the American voters, and not with a handful of judges. Most people don't want lawyers and judges running the country."

"Sadly, they do in many cases," Bream lamented.

Conservative attorney Ted Olson, who won a fight to repeal the federal ban on same-sex marriage, replied that the Supreme Court had a duty to "decide when the Constitution trumps the will of the people."

The attorney reminded Perkins and Bream that "the president's mother and father couldn't have been married in Virginia, they would have been guilty of a felony" before interracial marriage bans in 16 states were struck down by the Supreme Court.

Bream dismissed the comparison, saying that "some civil rights leaders" did not want LGBT rights compared to the struggle to end Jim Crow laws.

"If we take down the states' rights to define marriage for public policy purposes -- I mean, if two people who love each other can get married, I guess Ted's okay with the story out of New York magazine this week, that an 18-year-old daughter wants to marry her biological father," Perkins opined. "Are you okay with that?"

"Are you all the sudden interested in what you read in New York magazine?" Olson shot back. "I mean, it's very easy to say the sky is going to fall. We're now talking about something that's permitted in 36 states -- or 37, depending on South Dakota last week -- and the District of Columbia. No harm whatsoever has been done to heterosexual marriage as a result."

"That is not true," Perkins insisted. "Religious liberty has been placed on collision course with sexual license because a handful on un-elected judges and lawyers. The American people have a right to speak on this, they have. The court should respect the voice of the people."