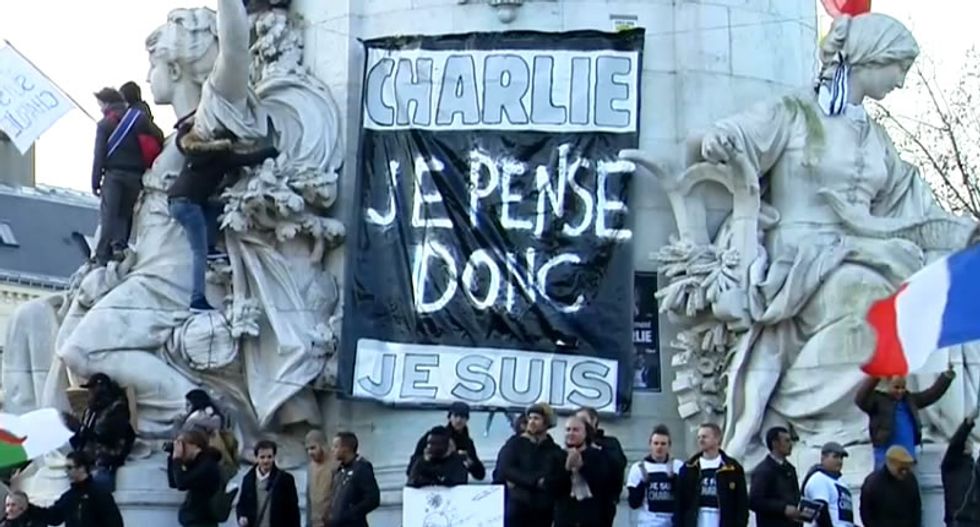 Hundreds of thousands of people joined by world leaders flooded Paris on Sunday in a historic show of defiance and solidarity against terrorism following this week's Islamist attacks in the French capital.

As France mourned 17 victims of three days of bloodshed that included Jews and a Muslim police officer, the leaders of Israel and the Palestinian Authority were among those attending the mass rally.

Under blue skies, emotions were running high in the shell-shocked City of Light, with many of those gathering from all walks of life already in tears as they came together under the banner of freedom of speech and liberty.

Lassina Traore, a 34-year-old French-born Muslim from the Ivory Coast, gently placed 17 candles at the foot of the monument at the Place de la Republique, heaped with tributes to the dead.

The march is "a real sign of how strong France is. It shows that France is strong when she is united against these people," said the consultant.

"I want to show that we're not scared of the extremists. I want to defend freedom of expression," said 70-year-old Jacqueline Saad-Rouana.

The families of those who died in the shootings that shook France to its core will be at the very front of the march, leading royalty and heads of state.

Security was beefed up, with police snipers stationed on rooftops and plain-clothes officers among the crowd in a city still reeling from the Islamist attacks which left 12 staff and policemen dead at the Charlie Hebdo satirical magazine and claimed four lives at a Jewish supermarket. A policewoman was also killed.

"Today, Paris is the capital of the world," French President Francois Hollande said. "The entire country will rise up," he told ministers.

French Prime Minister Manuel Valls told a poignant rally on Saturday near where a gunman killed four hostages at the kosher store: "I have no doubt that millions of citizens will come to express their love of liberty, their love of fraternity."

In a foretaste of the demonstration, more than 700,000 people poured onto the streets of cities across France on Saturday, many carrying banners reading "Je suis Charlie" (I am Charlie), the tribute to Charlie Hebdo that has been the global rallying point in the wake of the slaughter.

Many brandished pens to symbolise freedom of expression after the magazine was targeted by brothers Said and Cherif Kouachi for publishing cartoons lampooning the Prophet Mohammed.

Along with Israel's Prime Minister Benjamin Netanyahu and Palestinian President Mahmud Abbas, the king and queen of Jordan will be present alongside a host of top European leaders, including German Chancellor Angela Merkel and British Prime Minister David Cameron.

"En route to Paris, with Paris, for Paris," tweeted Italian Prime Minister Matteo Renzi, using the hashtag #jesuischarlie (I am Charlie), which has already been tweeted more than five million times.

US President Barack Obama was represented by Attorney General Eric Holder, who took part in an emergency meeting of interior ministers to discuss the threats from Islamic extremism.

The ministers urged a strengthening of the EU external borders to limit the movement of extremists returning to Europe from the Middle East and said there was an "urgent need" to share European air passenger information.

Speaking on a visit to India, US Secretary of State John Kerry said: "We stand together this morning with the people of France. We stand together not just in anger and outrage but in solidarity and commitment in confronting extremists."

President Hollande, who will lead the tributes to the victims, has warned his grieving country not to drop its guard in the face of possible new attacks.

Hollande ahead of the march met representatives from the Jewish community who said authorities had agreed to even deploy soldiers to protect Jewish schools and synagogues "if necessary."

The rampage by three gunmen who claimed to be members of the Al-Qaeda and Islamic State extremist groups was followed by a chilling new threat from the Yemen-based Al-Qaeda in the Arabian Peninsula.

German newspaper Bild said the bloodshed in France could signal the start of a wave of attacks in Europe, citing communications by Islamic State leaders intercepted by US intelligence.

France's three days of terror started Wednesday when the Kouachi brothers burst into the Charlie Hebdo offices in central Paris and sprayed bullets into the editorial meeting, killing some of France's best-known cartoonists.

They then slaughtered a Muslim policeman as he lay helpless on the ground before fleeing, sparking a manhunt that lasted more than 48 hours.

In a video posted online Sunday, a man resembling Coulibaly said the gunmen coordinated their efforts and claimed he was a member of Islamic State who was avenging attacks by the international community on the extremist group.

The massive hunt for the attackers culminated in twin hostage dramas that gripped the world as Coulibaly stormed into a Jewish supermarket in eastern Paris and seized terrified shoppers.

The two brothers took one person hostage in a printing firm northeast of Paris. After a tense stand-off they charged out of the building all guns blazing before being shot dead.

Coulibaly's mother and sisters on Saturday condemned his actions.

"We absolutely do not share these extreme ideas. We hope there will not be any confusion between these odious acts and the Muslim religion," they said.

Valls admitted there had been "clear failings" in intelligence after it emerged that the brothers had been on a US terror watch list "for years".

Watch the rally live via NBC News below.