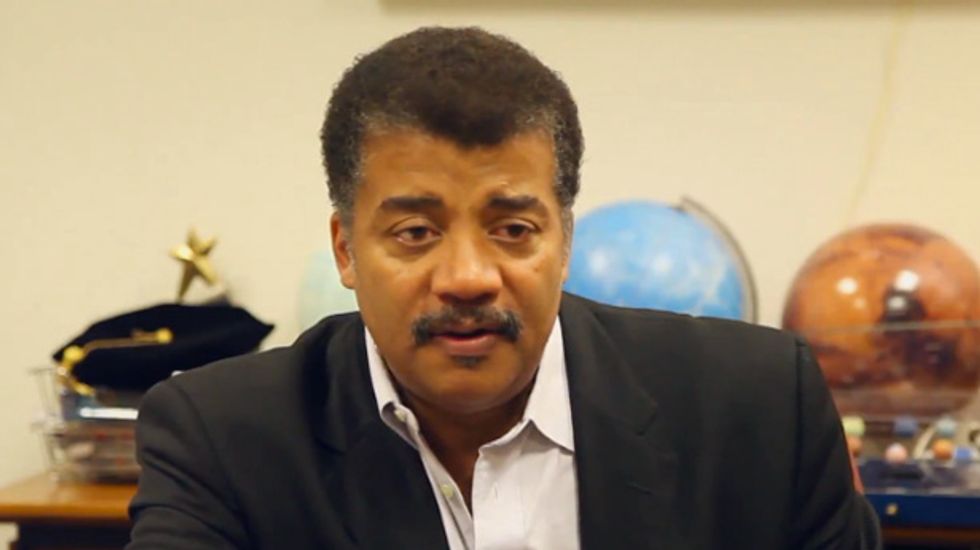 At an event last night at Boston's Wilbur Theatre, astrophysicist Neil deGrasse Tyson answered the question that's on everybody's mind: What is the meaning of life?

A "six-and-three-quarter"-year-old boy named Jackson asked the Cosmos host the question and the crowd erupted in laughter. "You're on the spot now, Neil!" yelled one audience member.

"If you're asking those questions now," Tyson replied, "you're going to be the deepest thinking adult there ever was."

"So -- what is the meaning of life? I think people ask that question on the assumption that 'meaning' is something you can look for and go, 'Here it is, I found it. Here's the meaning. I've been looking for.'"

That scenario, however, "doesn't consider the possibility that 'meaning' is something you create," Tyson said. "You manufacture it for yourself and for others. So when I think of 'meaning' in life, I ask, 'Did I learn something today that I didn't know yesterday, bringing me a little closer to knowing all that can be known in the universe?'"

Tyson admitted that he is still quite "far away from where all the knowledge sits," but at least he's "a little closer."

"If I live a day and I don't know a little more than I did the day before, I think I wasted that day," he said. "So the people who, at the end of the school year, say 'The summer! I don't have to think anymore!' -- I just don't know."

"To think brings you closer to nature. To learn how things work gives you power to influence events. Gives you power to help people who may need it -- to help yourself and your trajectory. So when I think of the meaning of life, that's not an eternal and unanswerable question -- to me, that's in arm's reach of me everyday."

"So to you, at age six-and-three-quarters, I'm going to suggest that you explore nature whenever you can."