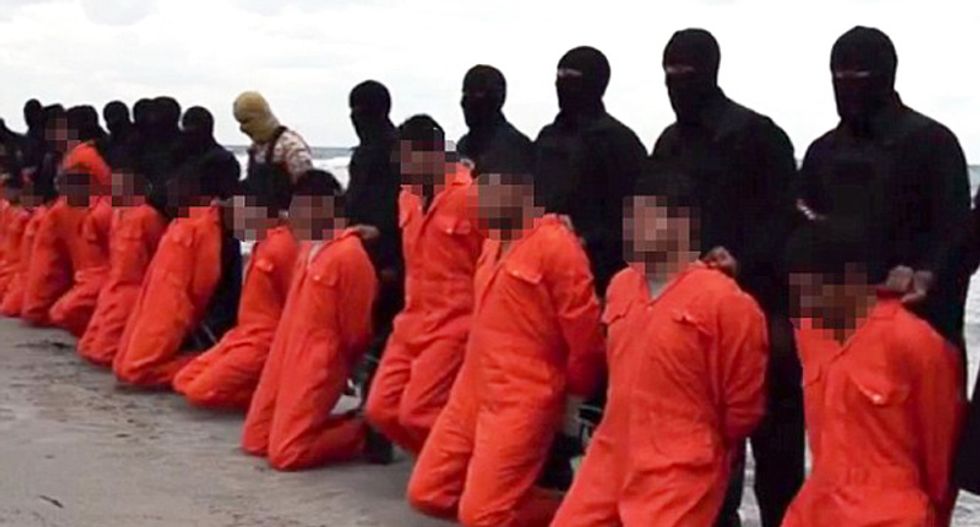 Screencapture from video released by ISIS

In September, Nihad Awad, the executive director of the Council on American-Islamic Relations (CAIR), held a press conference in Washington and, flanked by other Muslim figures, announced that 120 Muslim scholars had produced an 18-page open letter, written in Arabic, to ISIS leader Abu Bakr al-Baghdadi.

An English translation of the document is a tough slog. As Awad said at the time, "This letter is not meant for a liberal audience." He even admitted that mainstream Muslims might find it difficult to read.

The letter is an extended exegesis, heavily salted with quotes from the Koran and the Hadith, arguing point by point about the nature of jihad, the slaughtering of innocents, the taking of slaves, and other not-so-savory elements of the distant past -- and in the past they should remain, the text argues. It makes the case not only that ISIS was wrong to commit horrific acts of violence in modern times, but that it was interpreting Islamic law incorrectly to justify such acts.

ISIS not only doesn't represent Muslims. It isn't, in fact, Islamic at all, the document argues.

Just two weeks before, President Obama had kicked up a controversy by saying the same thing -- that al-Baghdadi's forces wreaking havoc in Iraq and Syria were "not Islamic."

After talking to an ISIS recruiter in Australia, an expert on ISIS theology at Princeton, and sitting down with three Islamic figures in London who yearn to join ISIS in Syria, Wood came to the conclusion that the apocalyptic vision of ISIS is, actually, deeply rooted in Islam.

"The reality is that the Islamic State is Islamic. Very Islamic," Wood writes. "Yes, it has attracted psychopaths and adventure seekers, drawn largely from the disaffected populations of the Middle East and Europe. But the religion preached by its most ardent followers derives from coherent and even learned interpretations of Islam."

Some of Wood's observations about what he calls the ISIS "hermit kingdom" include:

Because ISIS is so focused on these goals in a particular territory, it may actually pose less of a threat to Americans than al-Qaeda, which remains focused on targets in the West, Wood says.

He adds that understanding ISIS theology is key to preventing Western leaders from making things worse with what he says have been some blunders caused by ignorance. For now, he says, airstrikes and alliances with third parties are probably the best we can do. If we send troops for ground battles it will only help ISIS recruit more fighters as it appears to fulfill its prophecies.

And most of all, Wood asserts, it's crucial to understand ISIS through its Islamic underpinnings. Otherwise we just won't understand its motives.

I was curious, however, what Nihad Awad might make of Wood's article, since he had gone to so much trouble last year to argue the exact opposite.

Awad helped found CAIR in 1994, and he's been its only national executive director. He stood with President George W. Bush after the 9/11 attacks, expressing the outrage by America's Muslims at the attacks. And this week the press has been busy reporting his denunciations of the Chapel Hill murders of three young Muslims. He is, in the U.S., the face and voice of moderate Islam.

When I reached Awad yesterday, he hadn't seen the article yet. When I described it over the phone, he reacted immediately by saying, "This is an outrageous statement, an ignorant statement."

He then asked for some time to read the article in its entirety, and then we spoke again later last night.

"This piece is misleading because it's full of factual mistakes," Awad said. "Mistakes are all over it."

He blamed Graeme Wood for trying to grasp things he wasn't qualified to understand.

"Scholars who study Islam, authorities of Islamic jurisprudence, are telling ISIS that they are wrong, and Mr. Wood knows more than what they do, and he's saying that ISIS is Islamic? I don't think Mr. Wood has the background or the scholarship to make that dangerous statement, that historically inaccurate statement," he said. "In a way, I think, he is unintentionally promoting ISIS and doing public relations for ISIS."

I asked him for a specific mistake that Wood made in the piece, and he said right from the start it was obvious that Wood was out of his depth with Islam's terminology.

"He's using 'terrorism' and 'jihad' interchangeably -- that's very dangerous. Jihad is a legitimate concept in self-defense. If you call terrorism jihad, you are legitimizing the actions of terrorists."

I asked him about an apocalyptic vision in Islam -- does the Koran predict a violent end of days?

"There is no apocalyptic bloodbath in Islam. Muslims believe in the second coming of Jesus, but we don't believe what Christians or Christian Zionists believe," he said, referring to prophecies that get some American evangelicals worked up, predicting a bloody war between Muslims and Jews as a harbinger of the Second Coming. "We don't believe that," he said.

If ISIS isn't Islamic, what is it?

"ISIS represents a state of desperation of some Muslims who don't believe in justice. They see injustice, they hijack these grievances and try to culture it with religious justification. That's due to the lack of leadership of Muslims themselves there, the governments of Muslim and Arab countries, and the international community," he said. "Those leaders failed people who are under occupation, and ISIS is filling a vacuum of leadership.

"They're calling it a Caliphate, which is completely nonsensical," he added. "They're using certain historic terminology to appeal to young people who are disaffected. But they're appealing to a small number of people. Out of 1.7 billion Muslims, they've appealed to a few thousand.

And fighting a religious war will only make things worse, he said.

"As long as we have dictatorships and tyranny in the region, then something even worse than ISIS will replace it," Awad said. "Airstrikes are only a partial solution. A long term solution is to deal with the root causes. That will require wise leadership."

After talking to Awad, I reached out to Graeme Wood, telling him about some of Awad's criticisms.

"I do not equate 'jihad' and 'terrorism.' There may very well be factual errors in the piece, but he has not named any," Wood wrote in an email.

As for Awad's objection that Wood wasn't qualified to overrule Muslim scholars, he says, "Here he is confusing what is Islamic with what is right. I specifically refrained from saying whether ISIS's interpretation of Islam (or that of Abdullah Pocius, the Salafi imam I profiled in the piece, or that of the vast majority of other Muslims -- 'virtually all of them' -- who reject ISIS) is right. That is a question for Muslims. Instead, I argue that ISIS is Islamic, in the sense of drawing on the long and varied traditions and core texts that Muslims share. They did not make these practices up out of whole cloth, even the ones like slavery and execution of homosexuals."