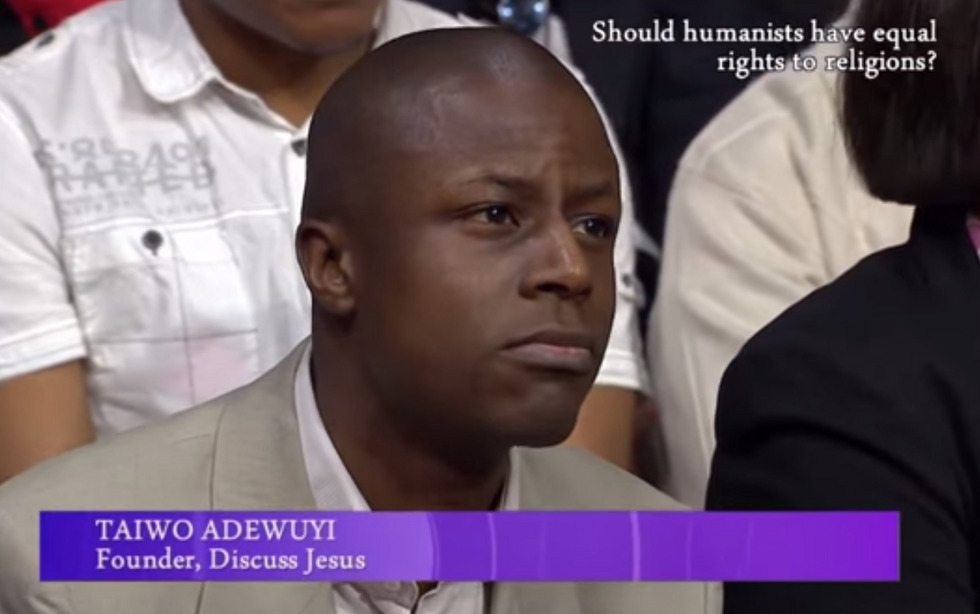 In the video embedded below, U.K. Christian and founder of the group Discuss Jesus Taiwo Adewuyi said that humanist weddings are "demonic" rituals, that secularism is "the Devil's PR" and nonreligious life is a "first-class ticket to the sea of wantonness and debauchery."

Adewuyi was appearing on The Big Questions, a British show dedicated to discussions of philosophy, religion and secular society.

He was responding to a U.K. government ruling from December which declined to include humanist weddings among the legal forms of matrimony in the country. Scotland made humanist weddings legal in 2005 and the ceremonies have proven to be immensely popular, currently outnumber Catholic weddings each year.

"It all goes back to the origins of humanism," Adewuyi said. "Humanism is the cancer on thanks-giving. It is the Devil's PR. It is a first-class ticket to the sea of wantonness and debauchery."

Humanism, he said, tries to "knock God off the throne" and put mankind at the top instead, which Adewuyi claims is wrong.

Andrew Copson of the British Humanist Association responded, "Well, if you're going to wantonness and debauchery, you might as well travel first class."

"Humanism," he explained, "is a nonreligious world view that -- instead of looking to revelation or authority, we look to reason and evidence to understand the universe. Instead of looking to moral rules that come from outside human beings, we look to other human beings to generate values in the here and now and also to generate meaning in our life."

"Instead of looking externally for some meaning to give value and sanction to the existence we're having, the humanist view is that men and women in the course of our lives create the sustained meaning together," Copson said.