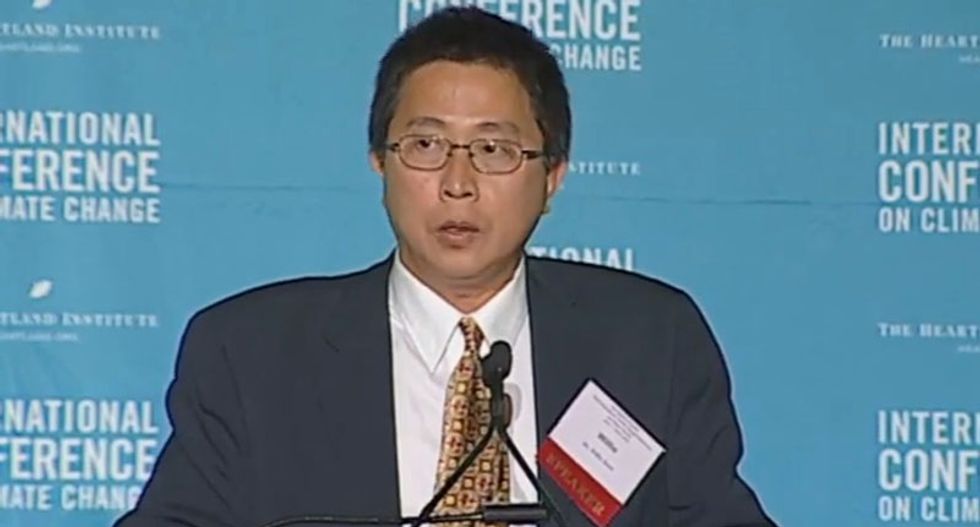 A prominent academic and climate change denier’s work was funded almost entirely by the energy industry, receiving more than $1.2m from companies, lobby groups and oil billionaires over more than a decade, newly released documents show.

Over the last 14 years Willie Soon, a researcher at the Harvard-Smithsonian Centre for Astrophysics , received a total of $1.25m from Exxon Mobil, Southern Company, the American Petroleum Institute (API) and a foundation run by the ultra-conservative Koch brothers, the documents obtained by Greenpeace through freedom of information filings show.

According to the documents, the biggest single funder was Southern Company, one of the country’s biggest electricity providers that relies heavily on coal.

Unlike the vast majority of scientists, Soon does not accept that rising greenhouse gas emissions since the industrial age are causing climate changes. He contends climate change is driven by the sun .

In the relatively small universe of climate denial Soon, with his Harvard-Smithsonian credentials, was a sought after commodity. He was cited admiringly by Senator James Inhofe , the Oklahoma Republican who famously called global warming a hoax . He was called to testify when Republicans in the Kansas state legislature tried to block measures promoting wind and solar power. The Heartland Institute, a hub of climate denial, gave Soon a courage award .

Soon did not enjoy such recognition from the scientific community. There were no grants from Nasa, the National Science Foundation or the other institutions which were funding his colleagues at the Center for Astrophysics. According to the documents, his work was funded almost entirely by the fossil fuel lobby.

“The question here is really: ‘What did API, ExxonMobil, Southern Company and Charles Koch see in Willie Soon? What did they get for $1m-plus,” said Kert Davies, a former Greenpeace researcher who filed the original freedom of information requests. Greenpeace and the Climate Investigations Center , of which Davies is the founder, shared the documents with news organisations.

“Did they simply hope he was on to research that would disprove the consensus? Or was it too enticing to be able to basically buy the nameplate Harvard-Smithsonian?”

From 2005, Southern Company gave Soon nearly $410,000. In return, Soon promised to publish research about the sun’s influence on climate change in leading journals, and to deliver lectures about his theories at national and international events, according to the correspondence.

The funding would lead to “active participations by this PI (principal investigator) of this research proposal in all national and international forums interested in promoting the basic understanding of solar variability and climate change”, Soon wrote in a report to Southern Company.

In 2012, Soon told Southern Company its grants had supported publications on polar bears, temperature changes in the Arctic and China, and rainfall patterns in the Indian monsoon.

ExxonMobil gave $335,000 but stopped funding Soon in 2010, according to the documents. The astrophysicist reportedly received $274,000 from the main oil lobby, the American Petroleum Institute, and $230,000 from the Charles G Koch Foundation . He received an additional $324,000 in anonymous donations through a trust used by the Kochs and other conservative donors, the documents showed.

Greenpeace has suggested Soon also improperly concealed his funding sources for a recent article, in violation of the journal’s conflict of interest guidelines.

“The company was paying him to write peer-reviewed science and that relationship was not acknowledged in the peer-reviewed literature,” Davies said. “These proposals and contracts show debatable interventions in science literally on the behalf of Southern Company and the Kochs.”

In letters to the Internal Revenue Service and Congress, Greenpeace said Soon may have misused the grants from the Koch foundation by trying to influence legislation.

Soon did not respond to requests for comment. But he has in the past strenuously denied his industry funders had any influence over his conclusions.

“No amount of money can influence what I have to say and write, especially on my scientific quest to understand how climate works, all by itself,” he told the Boston Globe in 2013.

As is common among Harvard-Smithsonian scientists, Soon is not on a salary. He receives his compensation from outside grant money, said Christine Pulliam, a spokeswoman for the Center for Astrophysics.

The Center for Astrophysics does not require scientists to disclose their funding sources. But Pulliam acknowleged that Soon had failed to meet disclosure requirements of some of the journals that published his research. “Soon should have followed those policies,” she said.

Harvard said Soon operated outside of the university – even though he carries a Harvard ID and uses a Harvard email address.

“There is no record of Soon having applied for or having been granted funds that were or are administered by the University. Soon is not an employee of Harvard.”

Both Harvard and the Smithsonian acknowledge that the climate is changing because of rising levels of greenhouse gas concentrations caused by human activities.

Pulliam cast Soon’s association with the institutions as an issue of academic freedom: “Academic freedom is critically important. The Smithsonian stands by the process by which the research results of all of its scholars are peer reviewed and vetted by other scientists. This is the way that the scientific process works. The funding entities, regardless of their affiliation, have no influence on the research.”