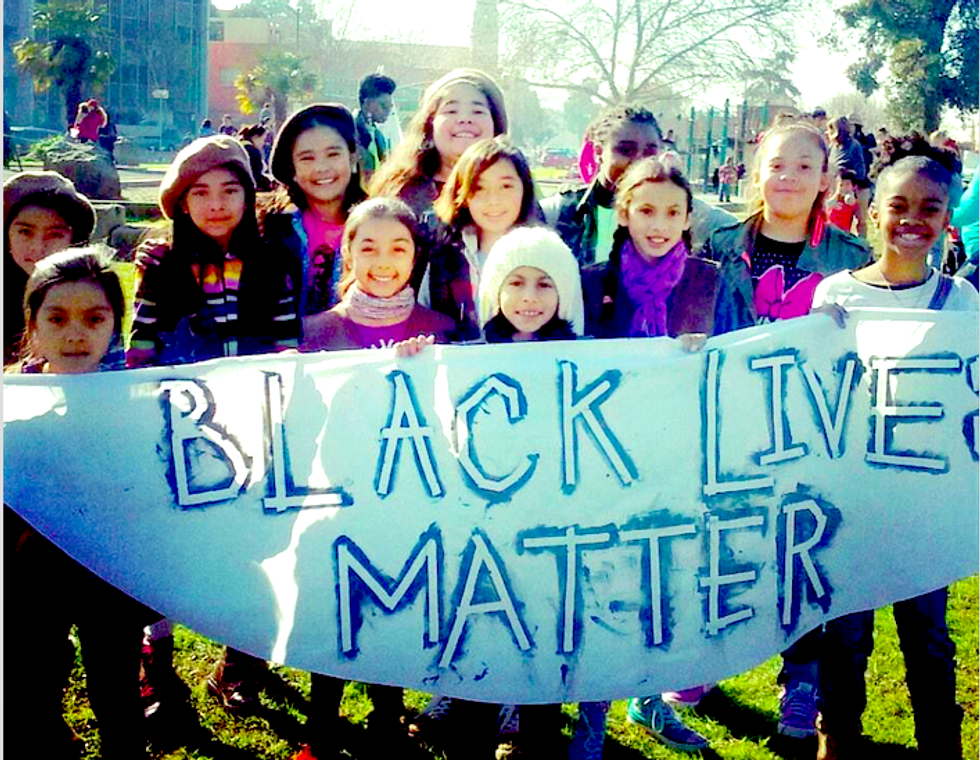 An Oakland, California-based "Radical Brownie" group has conservatives in a furious tizzy. The 8 to 10-year-old girls study social activism and take part of their inspiration from the 60s radical group the Black Panthers.

CBS reported last week that girls in Oakland can join the Radical Brownies, founded in the wake of the Black Lives Matter protests and dedicated to the notion of equality for all people, regardless of race.

Fusion.com says that all of the girls in the troop are children of color or mixed-race and that the organization is not affiliated with the Girl Scouts of America.

The girls in the group are studying the 1960s and 70s radical black empowerment group the Black Panther Party. The Black Panthers rose to prominence as a community "self defense" organization, dedicated to avenging and protecting black lives against the purportedly racist and corrupt U.S. criminal justice system.

The group's legacy is controversial. Some say they were strident, but effective, empowering blacks in a system that was stacked against them. Others say the Panthers were a hindrance to the civil rights movement, dedicated more to posturing and sensationalism than actual change.

Breitbart.com's John Hayward called the Radical Brownies a "horrifying" development that is so "creepy and fascist" as to beggar belief.

"(T)hey’re being filled with false propaganda by adults who seek to take advantage of them," said Hayward of the girls. "But that’s how fascists have always worked."

He went on to call the group "a form of child abuse" and argues that the girls are not being sufficiently warned away from "the dangers of playing race-card narratives, particularly those founded on false mythology." It is a "chilling thought," he said, that the group may expand to other areas of the country.

Hollinquest formed the group with her friend Anayvette Martinez because they felt that their daughters needed a group where they could explore their heritage and enjoy the company of other girls like themselves while also coming to terms our current racially divided society.

“How amazing would it be to have a girls’ troop that was really focused around social justice and where girls could even earn badges?” said Martinez.

At the Libertarian-leaning Taki's Magazine, Jim Goad asked, "When do Brownies become brownshirts?"

"This fledgling organization is not affiliated with the Girl Scouts of America," Goad complained, "and was formed in December by a black woman and a Hispanic woman who describe themselves as “queer women of color and avid trans allies.”

He went on to grouse about the racial makeup of the troupe, writing that the group "consists of about a dozen mostly Hispanic-looking girls ages 8-11 who are enabled and ideologically prodded along by the aforementioned queer women of color."

Goad found himself baffled and unable to decipher the group's community-oriented manifesto, saying, "I have no idea what any of that means. These buzzwords and catchphrases convey emotions I’ve never felt and concepts I’ve never imagined. Sometimes these types seem so empowered, I wonder how they avoid short-circuiting themselves."

"What would dear old departed Lord Baden Powell think of all this?" Goad lamented. Robert Baden-Powell was the British nobleman who is credited with founding the Scouting movement that ultimately spawned the Boy and Girl Scouts of America.

"What would the crisply disciplined English Brownies of the 1950s marching in clean formation to impress Princess Margaret make of it all?" Goad wrote.

But she feels the group's social justice message in on-target for the times and is a good way of explaining to kids the often-upsetting headlines about the deaths of unarmed teens of color like Trayvon Martin and Michael Brown.

“Kids already understand fairness and unfairness," said Hollinquist, "so we take that understanding at an age-appropriate level."