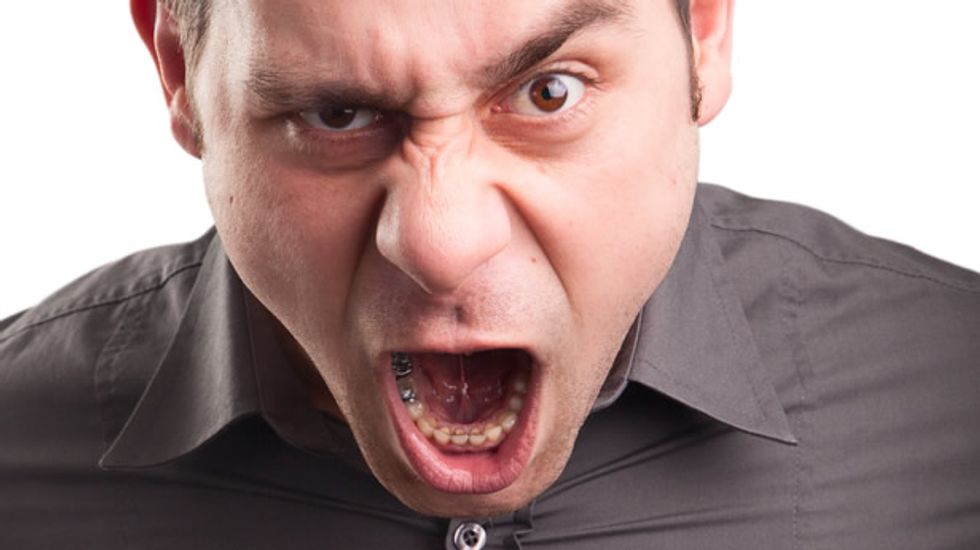 “I miss hating things,” says my friend Funchy, looking misty-eyed. He’s a Brooklynite, like me, raised in a house full of yelling and fighting all masking love of course….sometimes quite well. Bickering is our native language and when we’re together we speak it at each other like two old biddies from the old country. For us - and when it’s just between us - it’s a welcome pressure release.

Funchy doesn’t miss hating things. He still hates things. He misses saying he hates things because with some people who are averse to any expressions of anger or negativity while others - from ridiculous reality shows to the talking heads that have become screaming heads - could easily make you think everyone in America is one missed green light from turning the Tasmanian Devil. No wonder those “Keep Calm…” signs are so popular. We must really need the reminder.

Anger itself isn’t a bad thing: it’s a normal emotion and can be a terrific motivator for personal betterment or social justice. It’s how you handle it that confers benefits or damages. Whether you are a stewer or a spewer here are some things to consider when when you’re overwhelmed with anger - yours or someone else’s.

1. Get it out….safely Peter Sacco, Ph.D, is the author of What’s Your Anger Type? which describes some of the many ways we have of being ticked off and offers a questionnaire that helps you self-evaluate yours. According to my results my three biggest problem areas were were jealousy, road rage and petrified anger, which means, essentially, that you just can’t Let It Go (no matter how many times you hear the song).

People who keep their anger to themselves, Sacco says, risk having it boil over or even suffering from depression and generalized anxiety disorder.

“Some of them become physically sick: it manifests in their body,” Sacco says.

HowStuffWorks.com describes how the parts of your brain that control both emotion and reason are activated when anger is triggered and that, while these areas tend to balance out quickly, people who are chronically ticked off, who may not have the neurological mechanisms to quiet these effects, may suffer from an overexerted nervous system leading to heart, liver, kidney damage and high cholesterol.

For those who aren’t apt to simply let off steam but keep their anger concentrated inside, Sacco recommends safe zones like a therapist’s office, a support group, simply venting to a friend or, if any of those are unaffordable or embarrassing, having a journal to privately express your feelings. It may seem simple enough, but the metaphor Sacco uses, “getting the dirt outside so it doesn’t pile up inside and it become a dark deep mud,” does a good job of illustrating how dank our emotional clutter can become and, coupled with the physical symptoms, make a compelling case for finding safe spaces to vent.

Learning stress management techniques is also important, Sacco says - Santa Clara University has a good list including becoming organized (ever gotten livid because you can’t find your stupid keys?), getting adequate rest (ever snapped at someone you actually love because you’re tired?) and weeding out as many tension-causing elements from your environment as you can.

Behavior modification of this kind is what Sacco calls “an inside job,” something only you can do for yourself. And that’s as it should be. You don’t want to get to the point where someone, like a court system, has to mandate it for you; prior to writing the book, Sacco says, that’s how a number of his clients came to be in the anger management groups he ran.

While it’s good to get anger off your chest and out of your head, Dr. Robert Epstein of the Rady School of Management, UC San Diego says in Forbes magazine that it’s good to get it out of your lungs, too. We’ve all heard of taking a deep breath and counting to ten….this quick-action tip tells us to exhale and blow hard at the end of that exhale, counteracting the short, sharp breathing we do when we get stressed, which Epstein says “circulates toxins in your bloodstream and makes you panicky.”

4. The Joy of Letting Go

We all come to a point once in awhile with a friend or companion when we wonder why we’re hanging out with this person: they seem to cause us nothing but trouble.

If anger has become that companion, if you’re constantly angry, Sacco says, you have to ask yourself “Why am I holding onto this? What do I gain from being an angry person?”

Some people gain a sense of false confidence from their anger. Others might realize they’re not gaining anything but letting go of it might cause you to have to admit your anger was misplaced or - heavens! - that you were wrong, “therefore I look foolish, therefore I don’t want to let it go,” Sacco says, and it can become some heavy and alienating armor. But does admitting you’re wrong really make you look foolish? Actually it can make you look and be better. Nadia Goodman, writing in Entrepreneur on How To Admit Your Wrong talks about how ownership of mistakes, acknowledgement of anyone hurt by them and showing a willingness to change lead to being a leader who is better, not just one who looks better, tips that are easily translatable to other areas of life.

Even a job you love can drive you crazy sometimes and maybe lead you to say or do things you regret.

Your boss would do better to try to find out why than to decide that you’re fired. A 2011 study from Temple University’s Fox School of Business showed that when managers responded with compassion, support and acknowledgement to anger in the workplace, rather than simple sanctions or doing nothing, lead to a better work environment.

The study looked at reactions to “deviant anger” is defined as “physical acts, intense verbal displays, and inappropriate communication,” A statement on the study says that authors Deanna Geddes of Temple’s Fox School and Lisa T. Stickney of the University of Baltimore “even a single act of support by a manager or co-worker and the angered employee can improve workplace tension.” Showing an interest in what prompted the anger in the first place perceptions of improvement increase.

Think of it as taking a minute to find out where a draft is coming from and blocking it instead of incurring the cost of just turning up the heat.

It’s not always easy to step back and consider what made a person angry but the pay off is something we all want….respect.

In 2013 I wrote about the book Outsmarting Anger: 7 Strategies for Defusing Our Most Dangerous Emotion, winner of the National Multiple Schlerosis Society’s Books for a Better Life Award for Psychology, by by Dr. Joseph Shrand, instructor of psychiatry at Harvard, director of the CASTLE program (Clean and Sober Teens Living Empowered) in Brockton, MA. Time and again, when I’m trying to deal with my own anger or not provoke someone else’s, I’ve circled back to his question of “When was the last time you got angry with anybody you really believed was treating you with respect?” Time and again the answer is: you don’t.

You can alter - or defuse - situations potentially filled with anger by showing an angry person calm respect instead of mirroring that anger back at them. When people feel respected, they feel valued, which brings trust, which triggers oxytocin, a bonding chemical.

In my experience, showing that respect can be as simple as acknowledging that you get why they’re mad: “I can see why you’d feel taken advantage of…” or “If I were you I’d feel the same way,” so at least the person feels understood and not alone. It may not stop the anger in its tracks - when you’re going 100 mph it takes a minute to slow down - but it can alter the direction back to a better place.

It’s a dicey proposition, to admit to someone who teaches anger management that you enjoy a good hockey fight.

The subject comes up when Dr. Sacco and I talk about how anger can be glamourized in popular culture. He’s a superhero movie fan, he says, “and what is the Hulk, but someone who turns into a superhero out of rage?” Reality TV fights seem as common as commercials and then there are sports, contests people have been watching since the days of gladiators, Sacco says. In Canada, where he lives, hockey is everywhere and in his book he mentions the joke “I went to a hockey game last night and a fight broke out.” Other sports are just rough by nature, like football, which he’s a fan of. For some people these can be cathartic, and help release their own anger and stress, Sacco says…then asks me what, as a fan, I think about hockey fights.

Admittedly, I get as whipped up by a fight as anyone else. Occasionally, though, I’ve seen players get badly hit…and I feel like a bit of a jerk for having gotten so into it when I see there are real consequences, which Sacco calls the response of someone who might find such things cathartic but gets that this is not acceptable behavior in the real world (shwew!).

So for a lot of people watching confrontation is cathartic but for others it can have the opposite effect of making them even angrier and Susan Jayson writing in USA Today in 2010, describes how overreaction of TV personalities can lead people to believe that such reactions are normal in real life when, in fact, they’re over the top.

8. It matters what you compare yourself to

Most of us have down periods in our lives where we feel as though we do nothing but struggle, leading to all kinds of negative emotions, anger among them. I’ve talked to people who have gotten so bogged down in getting by that they forget what they like. Sometimes I’ve been that person myself.

Remembering to set aside time to take care of your health and find time for the things you enjoy, to live rather than just endure, Sacco says, is key to not being an angry person; while some people are complaining about everything from the weather to the dog chewing up their shoes, he says, someone else is in a hospital wishing they had another day.

How can I be angry when the chances are pretty good I’ll have another day to see Funchy…and yell at him?