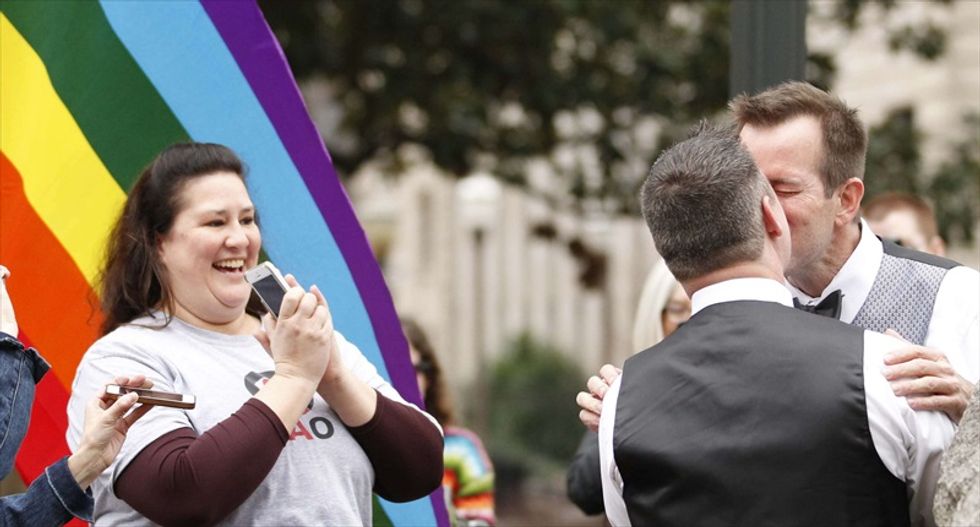 Greg and Roger kiss after getting married in a park outside the Jefferson County Courthouse in Birmingham, Alabama on Feb. 9, 2015. Photo by Marvin Gentry for Reuters.

A federal judge on Thursday ordered an Alabama official to comply with her earlier ruling striking down the state's ban on same-sex matrimony and begin issuing marriage licenses to gay couples.

The ruling marked the latest twist in the controversy over gay marriage in Alabama, where probate judges have faced conflicting orders from federal and state courts. The resulting disarray has allowed some same-sex couples to marry in places such as Birmingham, while those applying for marriage licenses in dozens of counties were turned away.

Granade's order applied specifically to Mobile County, where, within an hour of the ruling, same-sex couples who had been waiting in line at a county building began to receive licenses. It was not immediately clear whether judges in the other 43 of Alabama's 67 counties that have refused to issue marriage licenses to same-sex couples would reverse course.

Attorneys for four same-sex couples named as plaintiffs in the suit had urged Granade to issue a broad ruling to compel all judges in the state to begin granting marriage licenses to same-sex couples.

J. Michael Druhan, the lawyer for Mobile County Probate Judge Don Davis, whose county is the most populous of those that have refused to issue the licenses, said his client was stuck between the conflicting court directives and simply wanted guidance.

Druhan likened Davis, whose has kept his office's marriage license operations shuttered since Granade's earlier ruling went into effect on Monday, to a U.S. soldier frozen to the spot after stepping on a mine in a Vietnamese paddy field.

"If he stands there and does nothing, the snipers are going to shoot him in the head," he said. "If he moves, the mine's going to blow him to pieces."

The U.S. Supreme Court, in a strong signal in favor of gay marriage, refused on Monday to grant a request to keep the weddings on hold until the high court decides later this year whether laws banning gay matrimony violate the U.S. Constitution.

But Moore ordered state judges to defy Granade's ruling and uphold the state's gay marriage ban, an order his office said remained in effect despite the U.S. Supreme Court's action.

Most legal experts say Alabama's probate judges, who are elected officials in a state that passed a gay marriage ban in 2006 with 81 percent of the vote, will ultimately have little choice but to follow the federal court's ruling.

Among those watching Thursday's proceedings from the courtroom filled with supporters of gay rights was Toni Quinones, a 34-year-old lesbian from Mobile.

"We're no different than anybody else," she said. "We deserve to be able to marry who we love, just like heterosexual couples."