Here are the ten most hilarious stoner movies of all time 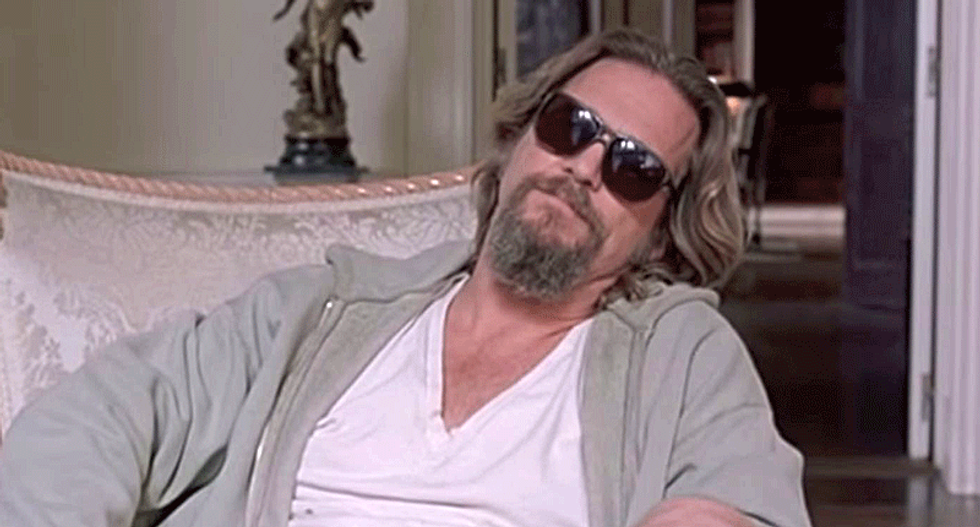 Jeff Bridges as "The Dude" in "The Big Lebowski"

It's been nearly 40 years since Cheech and Chong took pot humor to the big screen, and the stoner comedy movie genre that emerged from it has proved durable and and prolific, with dozens or maybe even hundreds of flicks that touch the category.

Stoner comedies are typically centered around marijuana—duh—and their protagonists, typically a pair of young men, must complete some arduous task, made even more arduous by their state of blissed out cluelessness. While the more mediocre efforts can be stale, juvenile, and boring, the best crackle with wit, poking fun at pot culture as much as its foes, and leaving audiences rolling on the floor with their THC-induced absurdities.

There are a lot of good ones (I could come up with another 10 worthies almost off the top of my head), but here, in alphabetical order, are the most primo of the primo:

1.  Cheech and Chong's Up in Smoke

In the beginning, there was Cheech and Chong. After a decade as a stand-up comic team, the pair defined the stoner comedy genre with their first film, 1978's Up in Smoke. Chong played a spoiled rich kid musician kicked out his house by his fed-up parents. He hooks up with Cheech's East LA vato, Pedro de Paca, whose interests are weed, rock music, and gaudy car upholstery. Together, the pair wreak stoned comic mayhem on both sides of the border in an epic that includes Stacy Keach as an incompetent cop, girl hitchhikers, a van made of "fiberweed" smuggled across the border, and the biggest joint you've ever seen. Still worth it after all these years.

Texas auteur Richard Linklater's paean to high school life in Austin in the stoned '70s generated a whole new generation of reefer devotees—and it introduced the world to Matthew McConaghy, in the form of the unforgettable post-high school lady-killer, party animal, and hot-rod enthusiast Wooderson. But Wooderson was only one character in an engaging piece of ensemble film-making that detailed the high school clash of the cliques, climaxing in a wild night of beer-drenched and smoke-filled frenzy at one of the city's fabled Moon Towers.

This 1982 classic crystallized the rejection of a Reaganite vision of society by its own children. "What are you kids on, dope?" snarls the straight-laced teacher at the beginning of the pic, and while his immediate target was Sean Penn's iconic slacker stoner Jeff Spicoli, the angst at a lost generation of sunburned California surfer kids was much broader. Penn's Spicoli was brilliant and subversive, rolling up to school in a van filled with pot smoke, ordering pizza during class, and—gasp—entering fast-food franchises shirtless. Cheap Trick, Pat Benatar, Jeff Spicoli. Those were the days.

In the first and funniest of what has become a Harold and Kumar stoner film franchise, Asian-American office worker Harold Lee (John Cho) and his Indian stoner buddy Kumar Patel (Kal Penn) attempt to get as high as possible, score more weed, and find their way to White Castle for some of those oh-so-delicious burgers. They have uproarious adventures and encounter many strange life forms along the way, including a cheetah with whom they toke up and then ride away and Neal Patrick Harris playing himself high on Ecstasy. He steals their car, but later redeems himself. Notable for its sharply-drawn lead characters and one guffaw-inducing scene after another, this is among the greats.

Method Man and Redman star in this raucous 2001 higher education romp. Fueled by a strain of superweed that makes them more intelligent, the hoodrats go to Harvard, rolling up with blunts hanging from their mouths and proceed to turn the staid institution upside-down. Like a black stoner Animal House, the flick features romance, rivalries with evil preppies, and, of course, an uptight administrator out to get our heroes. There's plenty of hilarity, and a choice appearance by Mike Epps as the pimp Baby Powder.

It's tough to single out just one flick from comedy powerhouse Judd Apatow and the coterie of actors—Seth Rogen, Jonah Hill, James Franco, Craig Robinson, Danny McBride, Steve Carrell, among them—who regularly work with him. The 40-Year-Old Virgin may be the pinnacle of Apatow's comedy, and it has some great reefer and other intoxication-related humor; Forgetting Sarah Marshall, with Hill's pot-dealing resort waiter and Russell Brand's breakout performance as rock star Aldus Snow, is also worthy; as is Brand's reprise as Snow in Get Him to the Greek. But Pineapple Express, half stoner-comedy, half action flick, has to be the stoniest of the bunch. Seth Rogen and his dealer, James Franco, make a great comedic team, and Franco's cross-joint is a most marvelous invention. Plus, Danny McBride, playing Red, a dope dealing middle-man, gets viciously and hilariously abused throughout. What's not to like about that?

Anna Faris does a virtuoso comedic turn in her portrayal of pothead aspiring actress Jane F., who wakes up one day with a list of things to do, including going to an audition and scoring some marijuana, but then gets totally detoured after, suffering a bout of morning munchies, she chows down her psycho roommate's pot cupcakes. From then on, it's an odyssey of uproarious idiocy as that totally-baked Faris muddles through a series of ridiculous misadventures while trying to pay her menacing dope dealer, get to the audition, and replace the cupcakes. There's also a great supporting cast, including John Krasinski as the smitten-but-nerdy friend with a car, Danny Masterson as Steve the roommate, and Jane Lynch as the casting director. But this is Faris's vehicle, and her stoner slacker girl is awesomely and hilariously spot-on. And it won her the High Times Stonette of the Year Award.

Inspired by Morgan Spurlock's McDonalds documentary Supersize Me, comedian and former Stoner of the Year Doug Benson smoked pot non-stop for 30 days (or as the move poster put it: "4:20 24/7 30 days"), then went cold turkey for 30 days. He also underwent medical, intelligence, and psychic ability examinations, with some amusingly unexpected results. This is a documentary, but there's lots of laughs as Benson gets baked, explores the marijuana scene, performs stand-up across the country, and hangs with a fine crew of fellow pot-friendly comedians, including Zach Galifanikis, Bob Odenkirk,  Patton Oswalt, Brian Posehn, and Sarah Silverman. And behind the laughs, some thoughtfulness, too.

Jeff Bridges is the dude, man--Jeffrey Lebowski, a burnt-out student radical turned middle-aged, bath robe-wearing LA pothead and team bowler whose rug is pissed on and whose mellow is severely harshed when he is mistaken for his namesake, businessman Jeffrey Lebowski, whose porn actress wife Bunny (Tara Reid) has either been kidnapped or is plotting to rip off her wheelchair-bound husband. With the help of his bowling buddies Donny Karabatsos (Steve Buscemi) and the deranged Walter Sobchak (a way over-the-top John Goodman), Lebowski plunges into the mystery, toking at every opportunity along the way. This 1998 flick also features great performances from Phillip Seymour Hoffman as an unctuous toady, John Turtorro as freaky bowling rival Jesus Quintana, and a crew of German nihilists. Nearly two decades after it was first released, this Coen Brothers production now packs in crowds at annual Lebowski festivals. The dude abides, man.

This 2007 parody of the Johnny Cash biopic Walk the Line is the single smartest of these stoner comedies and one of the funniest. Featuring John C. Reilly as Dewey Cox, a hard-scrabble, tragedy-tinged Southern musician who sang his way to fame and fortune, addled himself with booze and drugs, then found redemption in his old age, the flick mercilessly skewers the rags-to-riches motif, the music industry, and stardom, with a load of laughs along the way. Walk Hard has one of the all-time classic marijuana initiation scenes (with his black drummer, played by Tim Meadows, warning him away from the evil weed while simultaneously demolishing all the reasons he should stay away), and many more side-splitting drug scenes (including taking LSD with the Beatles). It also has great original music that really fits, including an outrageously risqué duet with Jenna Fischer (The Office), whose hotness splits Dewey from his 12-year-old wife (Kristen Wiig) in yet another hilarious scene. And then there's Dewey's later life sausage-selling business: "It don't say Cox unless it tastes like Cox."