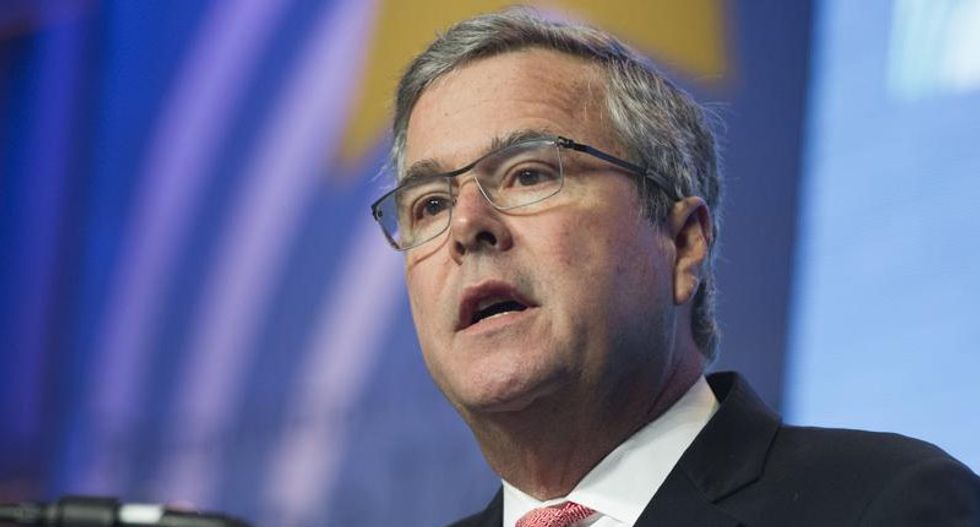 It ain’t easy being Jeb – I mean, it is for the rest of us Jebs, but for the guy who wants to be president, not so much. Just think of the family hassles: he probably has to unplug all his appliances when his brother comes over at Christmas, just in case George tries to touch one and shorts it out with the blood of hundreds of thousands of Iraqis dripping off his hands.

Jeb’s primary task in seeking the presidency will be to avoid putting images like that in your head; he and his myriad advisers know that you hear the name “Bush” and probably automatically think about unleashing the tremendous power of market innovation to solve the difficulties that arise from desert corpse-creation. The concern about being tarnished by his brother’s legacy probably explains why, out of a 25-minute prepared speech to the Chicago Council on Global Affairs on Wednesday, the excerpt that Team Jeb gave to the media in advance contained an “I’m my own man” declaration on which he later expanded:

I’ve also been fortunate to have a father and a brother who helped shape America’s foreign-policy from the oval office. I recognize that as a result my views will often be held up in comparison to theirs. In fact, this is a great, fascinating thing in the political world for some reason. Sometimes in contrast to theirs. Look, just for the record, one more time, I love my brother, I love my dad, I actually love my mother as well, hope that’s okay. And I admire their service to the nation and the difficult decisions that they had to make, but I’m my own man, and my views are shaped by my own thinking and my own experiences.

As the Washington Post’s Chris Cillizza noted , this is 118 words out of over 4,000 – but it was enough for the nation’s pundits to finish their columns and go to lunch before the speech even started (or perhaps even without listening to the speech at all), and still make sure Jeb’s desired message would spread.

Encouraging pundits to focus on their (already beloved) Bush v Bush narrative was a good strategy, because the rest of Jeb’s speech veered from insubstantial pablum only when it was contradictory or analytically null. (Even the “I’m my own man” message fizzled upon closer scrutiny: the Post’s Philip Bump was able to draw a Venn diagram to illustrate that Jeb Bush has a whopping one (1) foreign policy advisor not recycled from the Bush I or Bush II administrations.)

Granted, his speech wasn’t a white paper breaking down American strategic interests; it was a political speech, the tone of which needed to please core Republican primary voters and the centrists who show up for a general election. And while it was likely no sillier than what you will hear from every other candidate not named Rand Paul, Jeb’s outing was still a silly exercise in decontextualized fear on which the Republican Party has relied for decades now: Everything is terrifying!

Jeb opened by lamenting that “we definitely no longer inspire fear in our enemies”, which is one of those sentiments that says more about those giving it voice than about the rest of the world. Believing that the American city upon a hill will be a terrordome ringed with spikes and guns with the longest range probably springs either from an inability to engage with the rest of the world as anything but bully/busybody, or an unwillingness to honestly address the idea of American power outside of domestic political posturing.

How did we lose the ability to “inspire fear” despite pointing our guns and bombs at a heck of a lot of them for more than a decade, you might ask? Jeb answered that for you by ringing the Carter bell: invoking an era “where we saw firsthand what it was like to see the United States ... lose the respect of countries because of a weak and vacillating foreign policy”. In concert with Jeb’s invocation of the familiar Republican mummery about the tentacles of Iranian influence in the Middle East, you’re supposed to hear the Carter lost us Iran! cry again. (If China had imams, we’d hear Truman lost us China!.) Never mind anything you might have learned about the Shah (or, if you want to go back that far, Chiang Kai-shek) but, for God’s sake, don’t Google the year 1953 .

Related: Resist the Jeb Bush the media wants to sell you for 2016. It's a Jeb of lies | Jeb Lund

Jeb did veer dangerously close to self-awareness, but then moved safely away from it again by mentioning that, “In the beginning of the liberation of Iraq, neither Twitter nor Isis existed”. It’s an interesting factoid until you consider that “liberating” Iraq wasn’t one of the proximate causes of the invention of Twitter. But retweet if you remember destabilizing a region based on falsified claims that everyone in America needed to be afraid of a mushroom cloud, fave if you don’t understand causation.

He also talked about freeing Europe from the yoke of Russian influence via the liberating power of energy production. So, just warning you, if Europeans are wearing dull gray Soviet-designed unitards not designed by Kanye and walking desultorily beneath giant pictures of Putin in 2017, it’s because some Democrat didn’t have the courage to deregulate fracking until all the tap water from Oklahoma to West Virginia smells like a tire fire lit by benzene.

But it’s not all doom and gloom! Jeb said that “free people, free markets, free ideas” will set an example for other nations. This is the same Pollyanna line floated by the previous Bush administration (though, obviously, Jeb came to the same conclusions as George for totally different reasons), and the Project for a New American Century, of which Jeb was an inaugural signatory. But that message is reinforced by Jeb’s “second principle ... that our words and actions must match”.

This is one of the problems of the whole “free people” thing already mentioned; as a nation, we’re sort of dismal at that part. For instance, in his speech, Jeb called for strengthening Egypt, the sclerotic autocracy the United States propped up for decades and whose torture and repression birthed Sayyid Qutb and the Muslim Brotherhood (out from under whose robes al-Qaida scuttled into the world); its current president took power in a coup and is hardly known for his weakness on anything but human rights and press freedoms . Of course, we maintain close relations with him because Egypt recognizes Israel, which Jeb also praised in the nearly universal uncritical tone of official Washington. (Jeb also condemned the Obama administration for “leaks and personal insults to prime minister Netanyahu”, a man who’s been respectfully trying to complete an end-run around the current administration for six years via then-Rep Eric Cantor and House Speaker John Boehner.)

Related: Jeb Bush attacks Obama's foreign policy and insists: 'I am my own man'

And, one might wonder how resonant the “free people and free markets” line plays with the walled-off and embargoed citizens of Gaza – though, the Bush II administration answered that, with a Rumsfeld Defense Department analysis that ascribed “our one-sided support in favor of Israel and against Palestinian rights, and the longstanding, even increasing support for what Muslims collectively see as tyrannies, most notably Egypt, Saudi Arabia, Jordan, Pakistan and the Gulf States” as one of the “underlying sources of threats to America’s national security”.

Lastly, after an affectedly befuddled defense of NSA metadata mining as “hugely important” and victim of a “debate [that] has gotten off track”, Jeb boldly reiterated the Reagan line of “peace through strength”. He added:

Having a military that is equal to any threat is not only essential for the commander-in-chief, it also makes it less likely that we’ll need to put our men and women in uniform in harm’s way, because I believe fundamentally that weakness invites war. Strength encourages peace.

Heaven knows what you’re supposed to do with this; it’s vacuous to the point of suffocating brain function. No military is equal to any threat, and not even a fantastical version of our own could be equal to plausible ones that any of us could imagine now. Unless we as nation develop an immunity to qualms about carpet bombing a country with nuclear weapons, a beefed-up America still can’t do diddly-squat about North Korea. And you can forget Republican saber-rattling about settling China’s hash over its control of the South China Sea. (Poor China; it never learned that only the United States gets a Monroe Doctrine.) Not only does China have 1.3mn active duty troops, but its population of 1.35bn makes our population of 320m look like a rounding error.

So how can we face these threats, according to Jeb? “We should meet 21st century needs with a 21st century defense strategy”. Cool. That’s the same project Don Rumsfeld was working on before it got halted by two simultaneous wars of occupation and a sudden expansion of our military interests. I’m sure it’ll go great this time. And it has to, because of one stark reality we face:

Time and time again, we have learned that if we withdraw from the defense of liberty elsewhere, the battle eventually comes to us anyway.

Do you hear that message ringing loud and clear? Unless some other people die, we’re all gonna die. Again.

In other words, there’s going to be a bloodbath. Just don’t say it’ll be like Jeb’s brother’s bloodbath.

Iowa Democrats could move forward with presidential caucuses with or without the national party’s blessing, as it has in the past. But state party leaders are not speculating about what they might do if the DNC tries to end Iowa’s reign as the first presidential nominating contest in the nation.

The DNC Rules and Bylaws Committee is scheduled to recommend a new presidential nominating calendar during its meeting Dec. 1-3 in Washington D.C. The panel decided earlier this year to strip Iowa, New Hampshire, Nevada and South Carolina of their traditional leading positions and require them to compete with other states for the coveted spots.

Julia Conley, Common Dreams
Rights groups and other supporters of marriage equality celebrated Tuesday after 12 Senate Republicans joined with all Democrats present to pass protections for same-sex and interracial partnerships.

"Today we celebrate this win, tomorrow we continue to fight for the justice and equity that every American deserves."

The Respect for Marriage (RFM) Act does not confirm the right of same-sex couples to marry nationwide, as the U.S. Supreme Court did in Obergefell v. Hodges, but rather requires states to recognize their marriage licenses. It also does not block states from banning same-sex marriage if the high court's 2015 ruling is overturned—as Justice Clarence Thomas teased in his concurring opinion for the June decision that ended national abortion rights.