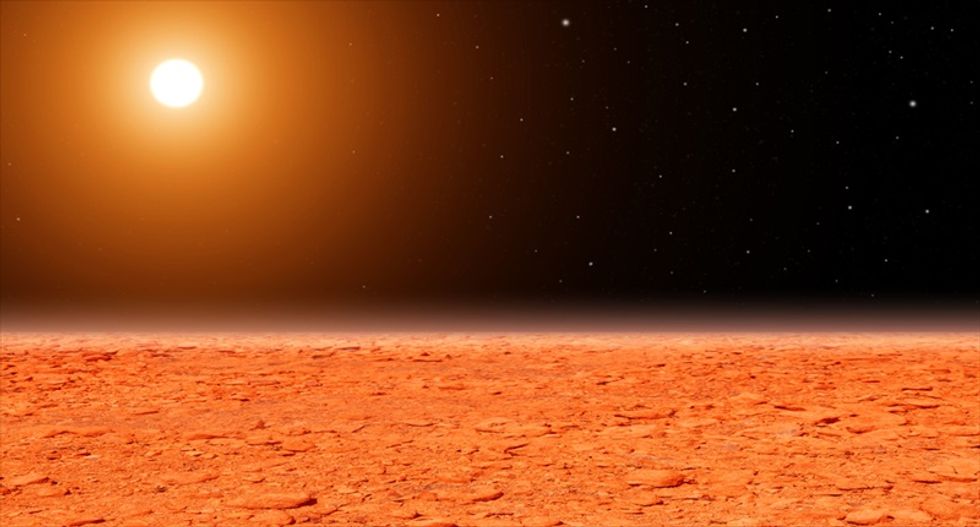 The phenomenon was observed on March 12, 2012 over the "terminator", the boundary between day and night on Mars.

One of the plumes developed in around 10 hours and lasted for about 11 days, shifting shape from "double blob protrusions" to pillars which merged into a "finger", the study authors wrote.

The "clouds" -- if that is indeed what they were -- were seen at high altitude, at about 200-250 kilometres, roughly above Terra Cimmeria, which is part of Mars' rugged southern highlands, according to the paper.

Mars is being scrutinised for signs of water and volcanic activity, both of which could theoretically nurture some form of life.

Clouds of dust or ice crystals have been spotted occasionally over Mars in the past.

But they have never been as extensive as the latest two, and they always formed at an altitude below 100 kilometres.

The plumes could be made of particles of water or carbon dioxide, said the paper published in the journal Nature Geoscience by a team led by Agustin Sanchez-Lavega of the University of the Basque Country in Bilbao, Spain.

Alternatively, it could be an aurora, similar to the shimmering light show that develops in Earth's atmosphere when solar particles collide with Earth's magnetic field.

Past surveillance by scientific orbiters have suggested Terra Cimmeria to have a "strip" with a strong but localised magnetic field.

If correct, the Martian "aurora" would be a remarkable 1,000 times brighter than its terrestrial equivalent.

But "both explanations defy our current understanding of Mars' upper atmosphere," the scientists admit.