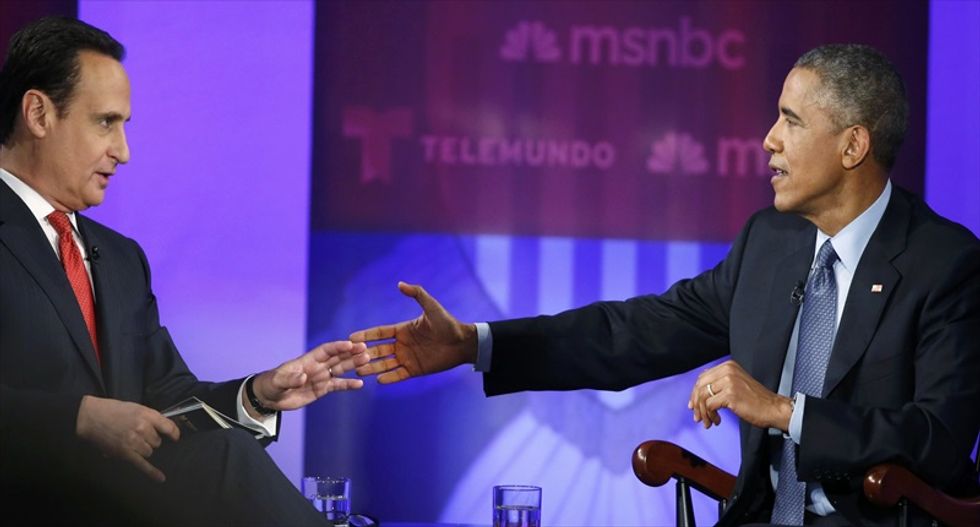 U.S. President Barack Obama (R) participates in the taping of an MSNBC/Telemundo town hall discussion on immigration with host Jose Diaz-Balart (L) at Florida International University in Miami, on Feb. 25, 2015. Photo by Jonathan Ernst for Reuters.

President Barack Obama on Wednesday told Latinos that Republicans were to blame for holding up changes to U.S. immigration laws, urging them to hold Republicans accountable for the problems in the 2016 presidential election.

Speaking on the home turf of Jeb Bush, the former Florida governor who is considering a run for the Republican presidential nomination, Obama told young members of Miami’s Latino community concerned about deportations that they need to turn up the political heat.

Bush has criticized Obama for setting back the cause of immigration reform by taking executive actions in November to offer work permits and lift the threat of deportation for as many as 4.7 million undocumented immigrants.

Obama's plans were supposed to take effect last week, but were thwarted by a Texas judge who halted the actions. The Justice Department has asked for an emergency stay on that action, and is also appealing the decision.

Obama said Bush’s criticisms were an “excuse” and noted that in the last Congress, Republicans in the House of Representatives blocked an immigration bill passed by the Senate from moving forward.

“I appreciate Mr. Bush being concerned about immigration reform. I would suggest though that what he do is talk to the speaker of the House and the members of his party,” Obama said.

Obama took questions about his stalled immigration actions at a town hall event televised on Spanish-language network Telemundo and MSNBC.

He blamed Republican governors for challenging his unilateral action in court.

Obama said that he is confident his administration ultimately will win a legal battle to proceed with his executive actions on immigration, but said it “will take a couple of months” to file and argue the case.

In the meantime, Obama promised Latinos that his border and immigration officials would focus on deporting criminals and recent border crossers, rather than people who have been living in the country for many years.

"You are going to see a substantial change even as the case makes its way through the courts," he said.

But he told the audience that the law still needs to change, otherwise his actions could be reversed by a future president.

“There are only so many short cuts. Ultimately, we have to change the law,” he said, chiding young Americans for poor turnout in the 2014 midterm elections.

"They'll ignore you if they don't think you're voting."

Watch footage of some of Obama's remarks, as aired on MSNBC, below.