Rachel Maddow: Repubs are so 'punchy' over a shutdown, John Boehner is making 'kissy noises' 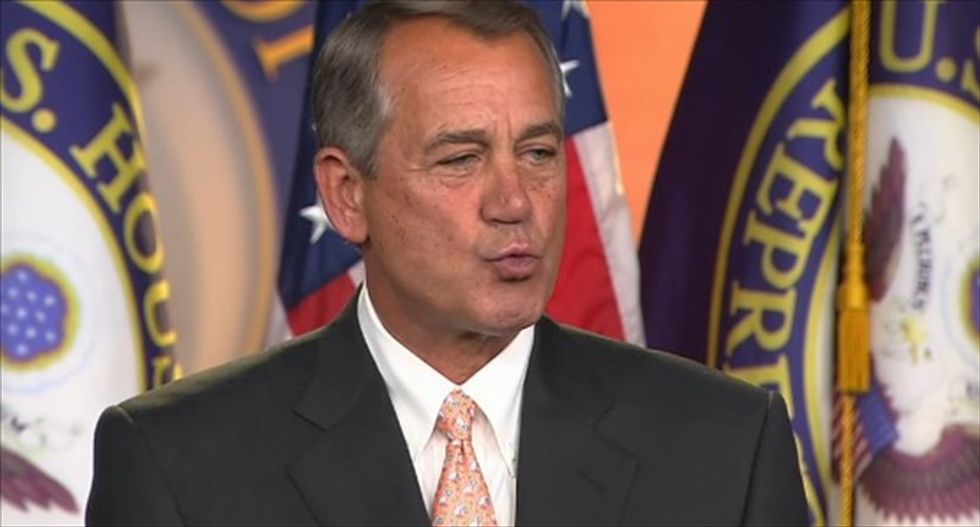 The threat of another possible government shutdown has thrown Republicans off, MSNBC host Rachel Maddow said on Thursday -- a point she illustrated by showing House Speaker John Boehner (R-OH) making a "kissy-face" at a reporter, as pictured above.

"We didn't invent that," she said. "We put that through the 'kissy noises'-to-English Google translator today, but I still don't know what he meant."

As Talking Points Memo reported, Boehner's bizarre behavior came in response to a question regarding funding for the Department of Homeland Security.

While the Senate is reportedly ready to pass a "clean" funding bill -- one including funding for implementation of President Barack Obama's executive order on immigration -- House Republicans are considering a bill funding the department for three weeks, instead.

"It is getting punchy and weird in Washington," Maddow said. "Punchy and chaotic."

The fight between House Republicans and their Senate counterparts, Maddow said, has led to the kind of in-fighting and "political cannibalism" that has not been seen in years, with Rep. Peter King (R-NY) breaking with Boehner and complaining, "People think we're crazy."