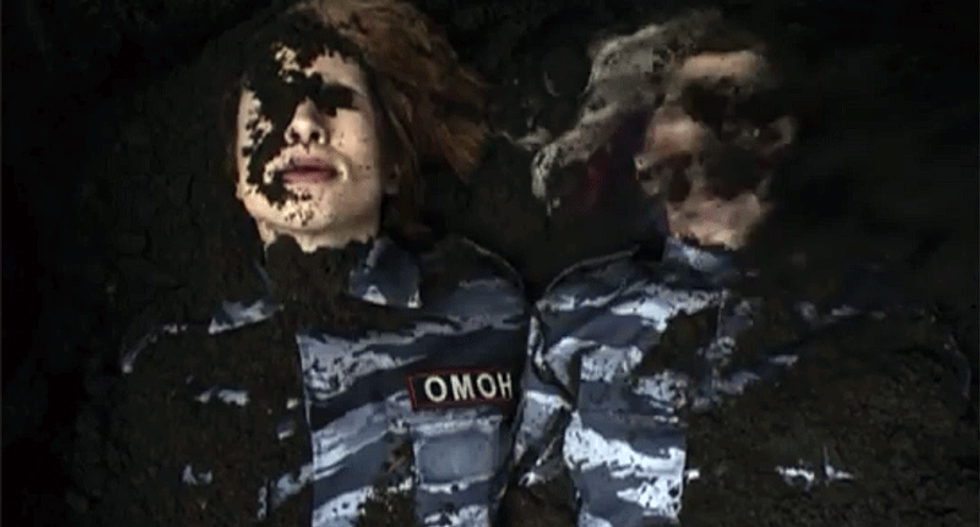 The video is dark, claustrophobic and haunting – an “industrial ballad”, in the words of Pussy Riot, inspired by the death of Eric Garner and dedicated to all of those “who can’t breathe”.

On Wednesday, Pussy Riot’s Nadya Tolokonnikova and Masha Alyokhina released their first song in English. Titled I Can’t Breathe, it shows Nadya and Masha dressed in the blue uniform of Russia’s OMON riot police, lying in a grave. They are slowly buried alive.

Pussy Riot said they wrote the song after taking part in street protests against Eric Garner’s death at the hands of NYPD officers in Staten Island, New York last July. It was dedicated to Garner and to “all who suffer from state terror – killed, choked, perished because of war and police violence – to political prisoners and those on the streets fighting for change”.

Their own first-hand experience of police brutality in Russia meant “we can’t be silent on this issue,” they said.

I Can’t Breathe is also a powerful protest against the political situation in Russia, and President Vladimir Putin’s bloody undercover war in Ukraine. The video echoes the secret night-time burials of hundreds of Russian soldiers who have perished in the conflict. Their families are not told how their loved ones have died or where, Pussy Riot said, adding that such information “is forbidden”. The Kremlin officially denies that its army is fighting in eastern Ukraine.

Nadya and Masha spent 16 months in a Russian jail, following their anti-Putin “ punk prayer ” in Moscow’s Christ the Saviour cathedral. They visited New York in December.

The song was composed and recorded in a New York studio over a single night, as protests gripped cities around the US following a decision not to indict a white New York police officer over the death of Garner, an unarmed black man whom the officer placed in a chokehold. Several American artists were involved, including Richard Hell – who read out Garner’s last words. The video was subsequently shot in Russia, in a single chilling take.

“The genre of this isn’t like other Pussy Riot songs. It’s an industrial ballad. Dark and urban. The rhythm and beat of the song is a metaphor of the heartbeat, the beat of a heart before it’s about to stop. The absence of our usual aggressive punk vocals in this song is a reaction to this tragedy,” Nadya and Masha write, in a piece published by the Guardian.

The video also includes a mordant visual reference to the “Russian Spring”. (An abandoned packet of Russian Spring brand cigarettes lies on the ground; unseen figures use metal spades to shovel earth over Nadya and Masha; afterwards the figures toss away a smoking cigarette.) Kremlin ideologists have used the phrase since Russia’s annexation of Crimea last year. It describes Moscow’s rejection of what it calls “western values” and its new, expansionist foreign policy.

Russia had “seriously changed” since Pussy Riot recorded its last music video at the 2014 Winter Olympic games in Sochi, the band said. Their previous song – sung in Russian and ironically titled Putin Will Teach You How to Love (Your Country) – features a Russian Cossack whipping Pussy Riot activists. They were attacked while staging a peaceful protest in trademark colourful balaclavas next to Sochi’s Olympic rings.

Related: Ukraine ceasefire in tatters as clashes escalate in east

Nadya and Masha said: “Since last spring we have been living in a condition of war and hatred towards the rest of the world that the Kremlin called the “Russian Spring”… a bloody war in Ukraine, fuelled and controlled by Russia, a civilian plane that was shot down by a rocket that killed hundreds of people from around the world – a lot of our plans and artistic conceptions were changed by news from the war zone that was arriving daily.”

They added: “We really could not breathe for this whole last year. Our previous ideas did not speak to what was happening in the conflict zone in Ukraine as we were realising that Russia is burying itself alive in terms of the rest of the world. Committing suicide. Daily. And so the song I Can’t Breathe is about us and our country as well. It is about Russia, too.”

Russian state media has repeatedly vilified Pussy Riot. It portrays them as agents of the west and fifth columnists. The band acknowledge that the new video – in which they are literally and figuratively buried – might give their critics pleasure.

“We’re sure that our burial will be a bit of wish fulfilment for some people out there,” they said.