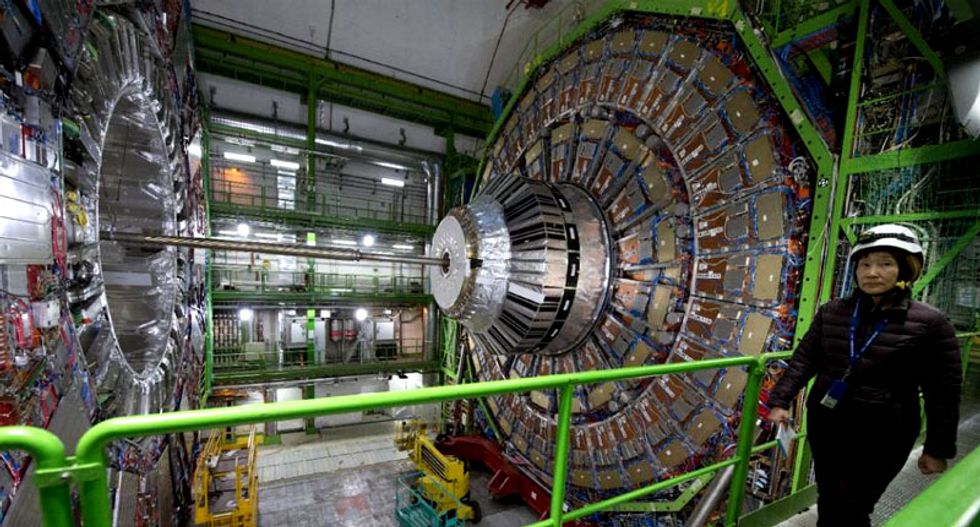 Excitement is mounting at the world's largest proton smasher, where scientists are close to launching a superpowered hunt for particles that may change our understanding of the Universe.

Physicists and engineers are running the final checks after a two-year upgrade that nearly doubled the muscle of the Large Hadron Collider (LHC), which in 2012 unlocked the putative Higgs boson and, with it, a Nobel Prize.

Now it has its sights on finding exotic new particles in a previously-inaccessible realm that can sometimes resemble science fiction.

"The most exciting thing is we really don't know what we are going to find," said Rolf Landua of the European Organisation for Nuclear Research (CERN), which hosts the LHC.

Experiments at the collider seek to unlock clues as to how the Universe came into existence by studying fundamental particles, the building blocks of all matter, and the forces that control them.

During its next run, researchers will look for evidence of "new physics". They will probe 'supersymmetry' -- a theoretical concept informally dubbed Susy, seek explanations for enigmatic dark matter, and look for signs of extra dimensions.

In late March, beams containing billions of protons travelling at 99.9 percent the speed of light will shoot through the collider's 27-kilometre (17-mile) ring-shaped tunnel straddling the Franco-Swiss border.

By about the end of May or early June, the mighty machine should be calibrated and start its long-awaited proton collisions -- brief but super-intense smashups recorded in four labs dotted around the ring.

"The most important thing which we would like to find is a new type of particle which could help to explain what this mysterious dark matter is," said Landua.

Ordinary, visible matter comprises only about four percent of the known Universe.

There is believed to be five to 10 times more dark matter, which together with equally mysterious dark energy accounts for 96 percent of the cosmos.

Fresh from its Higgs exploit, the LHC was shut as scheduled in 2013 to boost its collision capacity to 13 teraelectronvolts (TeV) -- 6.5 TeV for each of the two counter-rotating beams that zip around the ring.

"Thirteen TeV will be a new record, which will open the door hopefully for new physics, new discoveries," operator Mirko Pojer said at the bustling CERN control centre.

"LHC Run 2 will certainly help the physicists to better explain our Universe."

The collider's previous highest power was 8 TeV reached in 2012.

"I am pretty sure now with the new energy in the accelerator we will discover something," said Frederick Bordry, CERN director for accelerators and technology.

"By increasing the energy, the potential of discovery is higher by... maybe two orders of magnitude," or a hundred-fold, he said.

During its second three-year run, the LHC will seek to fill gaps in the "Standard Model" -- the mainstream theory of how our visible Universe is constructed.

The model doesn't explain dark matter or dark energy -- and seems incompatible with the theory of gravity.

Leading the pack of additional theories, "Susy" postulates the existence of a more massive, "supersymmetric" sibling for every known Standard Model particle.

This may explain dark matter, which is observable only through its gravitational effect on visible matter -- holding galaxies together, for example.

Scientists believe the LHC must now be powerful enough to find supersymmetric particles, if they exist.

"Susy is super beautiful and would fix the Standard Model in many ways," said Rebeca Suarez of the LHC's Compact Muon Solenoid (CMS) experiment.

"We are losing hope more every day about it. But there were also those losing hope of finding the Higgs and in the end we found it!"

The Higgs boson, theorised to confer mass on matter, was the last undiscovered particle predicted by the Standard Model.

Supersymmetry postulates there must be additional types of Higgs.

"Something very important will be to measure really well the Higgs boson that we have, to finally characterise it as a Standard Model particle," said Suarez.

"Any tiny deviation that we may find in the properties of the Higgs boson or any other Standard Model particle that does not follow the predictions could be a clear sign of new phenomena."

With the upgrade, the LHC can potentially be cranked up to a maximum 14 TeV, but even this may not be enough to find explanations for the strange phenomenon of dark matter, she said. A further, anticipated update may be required for that.

"If there is nothing, also it is interesting," she added, adding in all earnestness: "But of course to me, that is the worst-case scenario... It would be the worst thing to happen."

MSNBC's Joe Scarborough and Kasie Hunt agreed it should have been impossible for law enforcement to be unaware of the threat posed by former president Donald Trump's supporters on Jan. 6 -- and said it was inexcusable that Republicans are uninterested in learning how that failure put their own lives in danger.

The "Morning Joe" host pointed to a column he wrote on Dec. 11 saying that Trump's GOP had turned into "a band of radicals who present the greatest risk to American democracy since the Civil War," bent on "either actively engaged in sedition against the United States or offering their silent support to a president furiously working to overturn an election."

Government watchdog groups are calling on congressional committees to release the names of Trump political appointees who have "burrowed" into career civil service positions over concerns they may attempt to "sabotage" the Biden administration.

Former President Donald Trump signed an executive order in October that stripped career civil servants of employment protections and opened the door for political appointees to "burrow" into career positions inside the government. The move came as Trump Cabinet members like Education Secretary Betsy DeVos urged staffers to "be the resistance" to the incoming Democratic administration. President Joe Biden rescinded the order in his first days in office, but it remains unclear how many such appointees may have burrowed into career positions inside their departments.

Sitting in the consultation room of a swanky cosmetic surgery clinic in Washington, Hudson Young removed his mask under the satisfied gaze of his doctor.

Like a growing number of Americans, Young decided the right time to undergo plastic surgery was in the middle of a pandemic.