Shorter Bill O’Reilly: I saw nuns get killed on TV -- and that put me in a war zone! 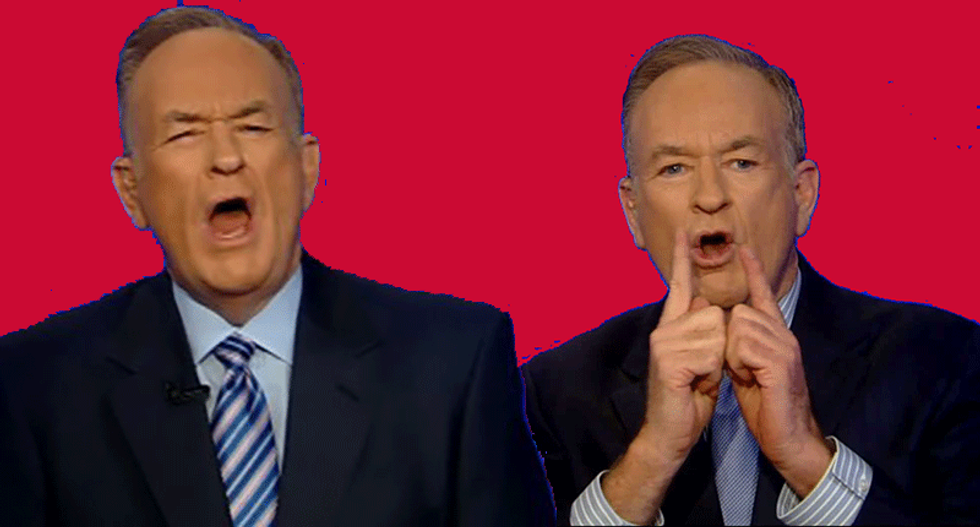 Fox News host Bill O'Reilly's reporting is being questioned again, this time regarding his apparent claim that he witnessed American nuns being shot in the head in El Salvador.

According to Media Matters, O'Reilly contradicted his own reporting making that statement on the Dec. 14, 2012 episode of The O'Reilly Factor.

"My mother, for example, doesn't understand evil. I would tell her, 'Hey mom, I was in El Salvador and I saw nuns get shot in the back of the head,'" O'Reilly told guests Brian Russell and Karen Ruskin in a discussion following the Sandy Hook Elementary mass shooting attack. He made a similar remark on his radio show seven years earlier, saying, "I've seen guys gun down nuns in El Salvador."

But O'Reilly had also stated on multiple occasions that he was not assigned to work in El Salvador for CBS News until after the nuns were raped, shot and killed by members of the country's national guard in December 1980.

"Before I went to El Salvador in 1981, I talked with some experienced Latin American experts, people who had seen the brutal wars down there for themselves," he said on the Factor on Feb. 22, 2002. "I had never been in a war zone before, so I wanted some prep."

Seven years later, he told WVVH-TV that he went to El Salvador "right after" the shooting.

O'Reilly said in a statement on Wednesday evening that his statements to Ruskin and Russell were only meant to invoke imagery.

"While in El Salvador, reporters were shown horrendous images of violence that were never broadcast, including depictions of nuns who were murdered," his statement read. "The mention of the nuns on my program came the day of the Newtown massacre (December 14, 2012). The segment was about evil and how hard it is for folks to comprehend it. I used the murdered nuns as an example of that evil. That's what I am referring to when I say 'I saw nuns get shot in the back of the head.' No one could possibly take that segment as reporting on El Salvador."

The questions surrounding his reporting in El Salvador come a day after former colleagues at WFAA-TV in Dallas slammed O'Reilly's allegation that he was at George de Mohrenschildt's door when de Mohrenschildt, a friend of Lee Harvey Oswald's, killed himself on the same day that he was contacted by the House Select Committee on Assassinations.

On Wednesday, O'Reilly argued that he and his network were being targeted because of their "pressure" on the White House to fight terrorist groups like Islamic State.