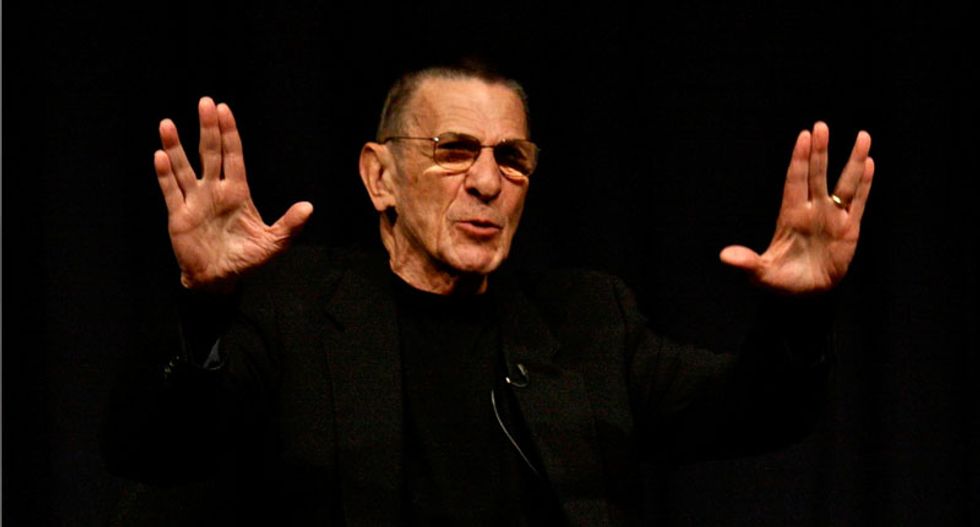 Actor Leonard Nimoy, who won fans worldwide for his generations-spanning role as the pointy-eared half-human half-Vulcan Mr Spock in the "Star Trek" television and film franchise, died Friday at age 83.

Nimoy, who suffered from chronic obstructive pulmonary disease, died at his home in Los Angeles. His wife, Susan Bay Nimoy, confirmed the death to the New York Times.

READ: These Leonard Nimoy farewells from friends and fellow travelers will hit your heart-spot

Born in Boston on March 26, 1931, Nimoy left for Hollywood at the age of 18, winning a sprinkling of small parts in 1950s television series.

With his squared jaw and serious features, Nimoy worked his way into showbiz playing cowboy characters and lawmen before he found a niche that would last a lifetime in science fiction flicks.

In 1966, he was cast in his greatest role as the ever-logical Spock, in the television show "Star Trek." Aboard the spaceship USS Enterprise, science officer Spock and its crew ventured around the galaxy exploring new worlds in death-defying odysseys.

The trinity had ratings-boosting chemistry that sustained "Star Trek" during its initial four-year run.

The character Spock would be resurrected for several feature films after "Star Trek" snowballed into a cultural phenomenon in the 70s and 80s, making Spock's Vulcan salute and salutation "live long and prosper" -- a touchstone of the science-fiction world.

Nimoy would later reveal he based the hand gesture on a Jewish blessing.

In addition to acting, Nimoy was an accomplished director.

He directed two of the Star Trek films including one of the most well received, "Star Trek IV: The Voyage Home." Nimoy also directed 1987 box-office hit "3 Men and a Baby" starring Tom Selleck.

Nimoy, along with some of his co-stars, struggled with the type-casting he was thrown into by legions of earnest and attentive "Star Trek" fans.

In 1975, he authored the book "I am Not Spock" attempting to open up space between himself and the character that had so captured people's imaginations.

While "Star Trek" fever built, Nimoy starred alongside Donald Sutherland and Jeff Goldblum in "Invasion of the Body Snatchers" in 1978, and then alongside Ingrid Bergman in 1982's "A Woman Called Golda."

Nimoy would eventually embrace his role as an authority figure in the sci-fi world. He wrote a rebuttal to his earlier memoir in "I am Spock" in 1995.

As Spock, Nimoy became a role model for nerds and geeks: he was calm under pressure with a logical response always at the ready.

He related an "embarrassing" anecdote to The New York Times in 2009 where he toured a California university with scientists who looked to Spock for approval.

"Then they?d say to me, 'What do you think?' Expecting me to have some very sound advice. And I would nod very quietly and very sagely I would say, 'You?re on the right track,'" he said about his adulation in the science community.

Nimoy had two children with his first wife, and was married to his second wife Susan since 1989.

Nimoy built off his sci-fi and Spock fame for the rest of his career, lending his voice to documentaries, video games and television shows.

He sold "Live Long and Prosper" apparel, and waved the Vulcan salute at "Star Trek" conventions.

He returned to "Star Trek" and an older version of his Spock character in the franchise's reboot directed by J.J Abrams in 2009 and in a 2013 sequel.