This week in rape culture: it's not rape if you're married, contact the rapist, or work in prison 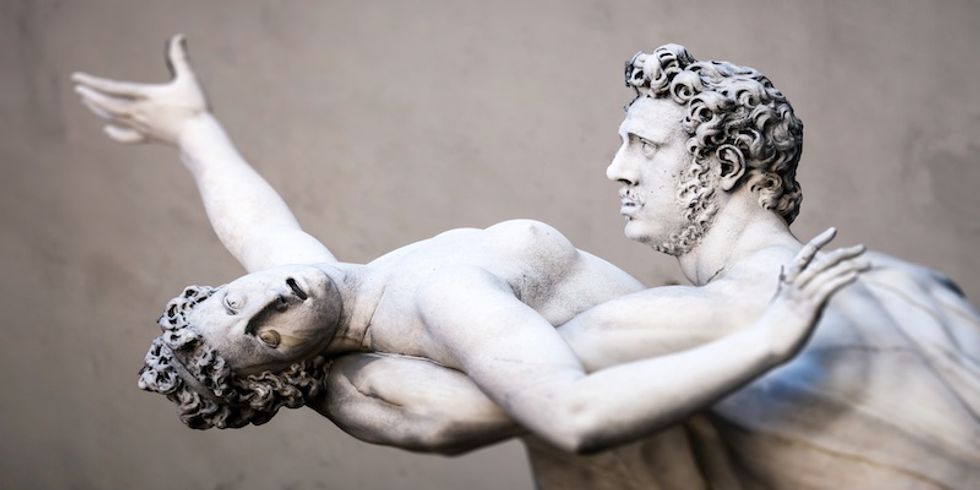 There's so much rape culture in the world it's nearly impossible to keep up! So, I've taken the liberty of gathering just some of the best examples of rape culture from this week. It turns out a lot of things we think of as rape aren't really rape at all. This is great news for all of you out there who thought you were victims or survivors of rape. Congratulations! You're not!

So here, without further ado... I present... #YouKnowYoureNotRapedIf

1. You are unconscious but your non-rapist is your boyfriend or husband. State Rep. Angela Romero (D-Salt Lake City) presented a bill which would clarify the state's legal definition of rape. Up until now, rape was defined as taking place when “The victim has not consented and the actor knows the victim is unconscious, unaware that the act is occurring, or physically unable to resist.” Romero, being the extremist, man-hating, feminist that she is, wanted to remove, “the victim has not consented.” Her radical reasoning is that, "if somebody is unconscious you probably shouldn’t attempt to try to have sexual relations with them." In other words, you shouldn't be allow to have sex with someone who is unconscious and then say it's not rape because they didn't "say" no.

This isn't purely theoretical, but has, and has had, real life applications. Donna Kelly, An attorney who helped draft the measure, referred to a real case in 2008, when a woman alleged she woke up to being raped. The judge, however, ruled that the prosecution had failed to demonstrate  a “lack of consent through words or conduct":  “(The victim) woke up to the event happening her, but because of that statute, that statutory language, the case was dismissed.... How can you express anything when you’re unconscious? It needs to change.”

This bill sounded alarm bells for state Rep. Brian Greene (R-Pleasant Grove), who worried about the rights of rapist husbands:

If an individual has sex with their wife while she is unconscious … a prosecutor could then charge that spouse with rape, theoretically... That makes sense in a first date scenario, but to me, not where people have a history of years of sexual activity... do we as a body a legislative body want to make that rape in every instance?

Sadly, for marital rapists, the bill passed. And Greene did some damage control and offered a half-baked not very coherent apology, claiming he "was concerned about a change in statutory language that would remove the element of consent and might have some unintended consequences. I was attempting to clarify the issue through the committee’s discussion.”.

So, there is no more rape culture. Happily every after! The end.

2. You engage in any exchanges with your non-rapist outside of taking legal action. Also on Tuesday, just as Greene was speaking out for the voiceless husbands who like to rape their wives, Cathy Young, whose pet peeve is feminism, was helping smear the name and character of Emma Sulkowicz, the senior at Columbia University who alleges she was raped by a fellow classmate. Young seems to think she has found the smoking gun which proves that Sulkowicz is lying and Paul Nungesser, the man she accused of hitting, strangling and anally raping her, is innocent. What is the evidence? Screenshots from Facebook chats between Sulkowicz and Nungesser. Here is damning exchange, which took place two days after the alleged rape.

Sulkowicz: "lol yusss. Also I feel like we need to have some real time where we can talk about life and thingz. because we still haven’t really had a paul-emma chill sesh since summmmerrrr."

At a later date,  Sulkowicz asked him he he wanted to “hang out a little bit” and then said, "whatever I want to see yoyououoyou. respond—I’ll get the message on ma phone."

The oh so subtle implication is that rape victims don't communicate with their rapists in any way that expresses anything other than unadulterated venom, contempt, condemnation, but without seeming like a hysterical woman type thing. It's a very hard balance to strike and yet if it is not struck, the person is not really a victim. In case you're wondering who Young considers the true victim to be, she writes, "if Nungesser is not a sexual predator, he could be seen as a true victim: a man who has been treated as guilty even after he has proved his innocence."
Journalist Julie Zeilinger has a more nuanced view of what happened:

After her assault, Sulkowicz's reaction was to seek a conversation with her rapist. "I was upset and confused. ... I wanted to have a talk with him to try to understand why he would hit me, strangle me and anally penetrate me without my consent," she says. Sulkowicz's response may not align with the perfect victim narrative, but it's reflective of the fact that there is no one way to react to trauma.
This is why so many survivors stay with their abusers; the cycle of abuse is complex, personal and ultimately unknowable to anyone aside from the survivors themselves. Meanwhile, the idea that emotional intimacy prevents violation is patently false. Every state has criminalized marital rape, and yet we still seem to struggle to grasp this truth.

Zeilinger's mention of the denial of marital rape is especially poignant since  Nungesser himself doesn't seem to believe it actually exists. When asked about intimate partner violence in an interview with The New York Times, the Columbia student, who boasts of being a feminist, said, “Outside of a forced marriage or kidnapping, it just seems very hard to believe that a person would over and over again put themselves in a situation where they could expect this kind of behavior to occur.” Is that a direct bell hooks quote?

3. You are non-raped while on the job and your job has risks. The Arizona Attorney General's Office is trying to get a frivolous lawsuit dismissed. And by frivolous lawsuit, I'm referring to the one about filed by a teacher who worked for Arizona Department of Corrections teacher and was stabbed in the head with a pen and raped. The assault happened in January, 2014 at the the Arizona State Prison Complex-Eyman, where the woman was administering a test to seven prisoners, all of whom were convicted sex offenders. After the six other prisoners finished the test and left, the teacher was left alone with a 20-year-old inmate named Jacob Harvey, who was in jail for raping a woman in front of her toddler. Harvey allegedly grabbed the woman from behind, stabbed her in the head with a pen, wrestled her to the ground, tore off her clothes and raped her. According to the law suit, after the attack, the woman tried to radio for help from the guards. Unfortunately, the radio had been set to an unused channel.

The lawsuit claims that the woman should never have been left alone with the prisoners or with a radio turned to the wrong channel. Assistant Attorney General Jonathan Weisbard responded by filing a morion which read:

Plaintiff is an ADOC (Arizona Department of Corrections) employee who routinely worked at the prison complex. By being placed in a classroom at the complex, the officers were not placing Plaintiff in any type of situation that she would not normally face. The risk of harm, including assault, always existed at a prison like Eyman.

Plaintiff wants to create an artificial impression that the ADOC officers knew she was in danger but she did not know. It makes no sense. Of course, if Plaintiff did appreciate the danger of her situation, as an employee, she could have done something about it.

Translation: she shouldn't have taken that job. It's a modified version of she shouldn't have worn that dress. Besides the fact that the motion is astonishingly callous, and oddly colloquial,  it is also factually wrong. She wasn't in the type situation she would normally be in. Normally, tests are given in a visitation room, which is monitored by security cameras and corrections officers. But, on the day in question, there was a special event and the test was moved to an unmonitored classroom.

It's nice to know that in an age fraught with conflict and division, there are still some things which unite people across the country, from the North to the South, from the East to the West, from the halls of government, to the editorial desks of journalism, to the the courtrooms of justice: rape culture.

A US navy destroyer sunk during World War II has been found nearly 7,000 meters (23,000 feet) below sea level off the Philippines, making it the world's deepest shipwreck ever located, an American exploration team said.

The USS Samuel B Roberts went down during a battle off the central island of Samar on October 25, 1944 as US forces fought to liberate the Philippines -- then a US colony -- from Japanese occupation.

With its Siamese-twin decisions on Thursday and Friday, the Supreme Court didn't just turn back the clock or flip through the pages of the calendar looking for a new decade — or century — to love. Calling themselves textualists and originalists, they simply put the Constitution through a search engine and told it to look for some key words: Abortion? Uh-huh, not there. Gay sex? Not in 1791 or 1868! Same-sex marriage? Are you kidding?