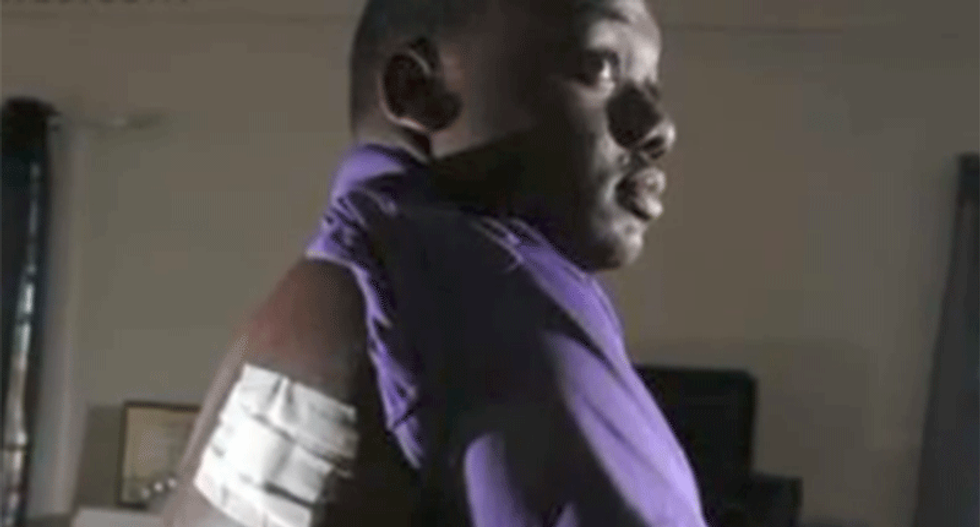 A Los Angeles police officer shot an unarmed teenager in the back as he stood with a group of friends, one of whom was carrying a fake pistol.

Jamar Nicholson, 15, was on his way to school with some friends on Tuesday. As they clustered in a residential alleyway, police officers from the city’s Criminal Gang Homicide Unit spotted the teens and reported that one was pointing a gun at another, according to the LA Times .

The boys and some neighbours insist no warning was given, according to news reports, even though officers said they shouted “Freeze!” and demanded the supposed weapon be dropped.

According to Nicholson, a detective later told him there had been a mistake and he had not committed any crime. An LAPD captain reportedly apologised to Nicholson’s mother, although the teenager said he wanted to hear from the officer himself.

While 15-year-old Jamar Nicholson was on his way to school with some friends, they clustered in a residential alleyway. Police officers from the city’s Criminal Gang Homicide Unit were passing on their way to a call when they spotted the teens and reported that one was pointing a gun at another, according to the LA Times .

Shots were fired, but the boy holding the supposed weapon was not injured. Only Nicholson was hit.

Witnesses say an ambulance arrived 15 to 20 minutes after the shots were fired and Nicholson was reportedly put in handcuffs. He was released from the hospital the same day, but the bullet is still lodged in his back. According to reports, it narrowly missed hitting his spine.

The officer who shot Nicholson was not immediately named. He is expected to be identified by the Los Angeles Police Department (LAPD) as more details of the incident emerge.

Police acknowledged the mistake but warned that people put themselves at serious risk of being challenged and shot by officers if they display such replica guns on the street.

The incident raises further concerns about police officers shooting at unarmed civilians or children carrying fake or pellet guns, after a series of deaths across the US in the last year that sparked mass protests and debate at federal level about the use of force by officers and police relations with minority communities.

Last November, police in Cleveland, Ohio, shot 12-year-old Tamir Rice dead within moments of encountering him near a recreation centre, in possession of a pellet gun .

Unlike the officer who killed Michael Brown, Liang was charged. In court in New York on Wednesday, he pleaded not guilty to manslaughter.

The fake pistol in the Los Angeles incident was black and with a realistic appearance of a semi-automatic handgun, with only a small orange plastic tip over the end of the barrel to indicate it was not real.

Last September, California governor Jerry Brown signed a bill that bans the manufacture or sale of fake or pellet guns unless they have fluorescent markings on the trigger guard and body. State senator Kevin de León introduced the bill after Andy Lopez, a 13-year-old boy from Santa Rosa, was killed while carrying a replica gun that resembled an AK-47 assault rifle.

In LA in 2010, Rohayent Gomez, a 13-year-old playing “cops and robbers” with two friends, all of them carrying realistic black pellet guns, was left paralysed after being shot in the chest by a police officer who thought the guns were real.

After suing the police for excessive force, Gomez was awarded $24m .

“It’s certainly an unfortunate situation,” an LAPD spokesman, Commander Andrew Smith, told the LA Times about the shooting of Nicholson. “But because of people bringing replica weapons out like that, it certainly could have been a terrible tragedy.

“Don’t let your children carry these guns, especially don’t let them play with them outside,” he said. “We could have had a fatal tragedy here. If an officer sees a gun and it looks real and a person who is holding it does not drop it there is a realistic chance the officer will shoot.”

“In trying to save a life here, unfortunately the officer shot a youth … I don’t want this compared to other shootings of young black men. This is not the situation here,” he said.

Whittingham said the officer involved felt his life was threatened.