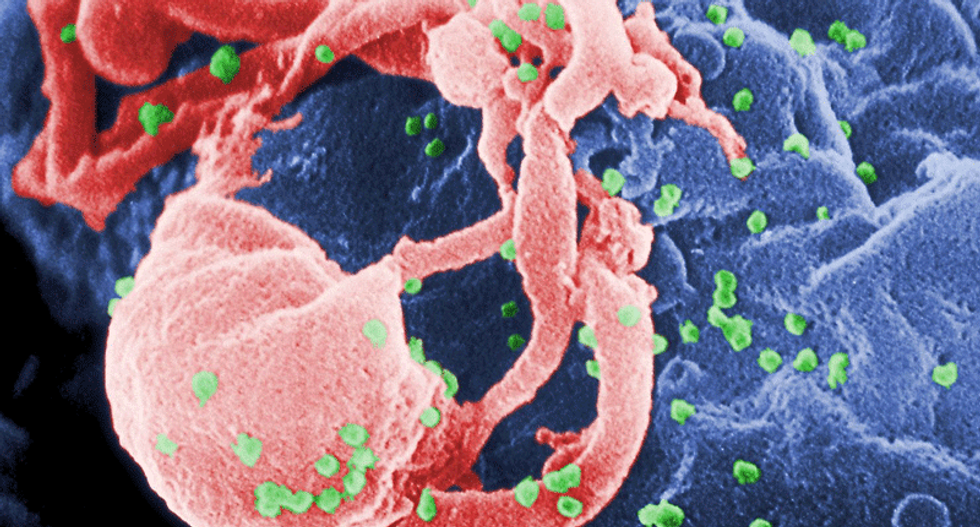 Scientists said Wednesday a new drug tested on monkeys provided an astonishingly effective shield against an animal version of the AIDS virus, a major gain in the quest for an HIV vaccine.

Macaque monkeys given the drug were able to fend off high repeated doses of the simian version of the human immunodeficiency virus (HIV), they reported in the journal Nature.

"We... show a way to achieve long-lived, effective, vaccine-like protection from HIV 1," the main group of viral strains in humans, said study leader Michael Farzan, a professor at the Scripps Research Institute in Florida.

The prototype drug, called eCD4-Ig, comprises two imitations of the receptors, or docking points, where HIV latches on to CD4 cells -- the key defences of the immune cells.

The mimics latch on to the virus, tricking it into prematurely launching the docking procedure.

The virus can only execute the procedure once, rendering it unable to attach to CD4 cells thereafter.

The scientists likened the effect to closing the door to an intruder and tossing away the key.

The paper reported on a 40-week experiment which showed that inoculated animals thrived even after being injected with four times the dose needed to infect macaques in a "control" group.

Further research, to be unveiled at a conference in Seattle next week, found that the treated macaques "continue to be protected from eight times and 16 times the infectious dose, more than a year after inoculation," Farzan said.

The search for a vaccine has been one of the most frustrating chapters of the AIDS saga.

Traditional antibody-based vaccine candidates have failed to put up more than a partial shield, partly because of mutations in the stealthy virus.

The new prototype formula, though, targets sites on the virus' so-called Env entry protein that are "highly conserved" -- a scientific term meaning that these sites do not mutate very much.

Lab-dish tests have found that the drug also works on human HIV, which is very close to the simian version of the virus.

"Unlike antibodies, which fail to neutralise a large fraction of HIV-1 strains, our protein has been effective against all strains tested, raising the possibility it could offer an effective HIV vaccine alternative," said Farzan.

He cautioned: "Of course, we still need to do further safety studies in both macaques and humans" before any trials can take place.

Since 1981, about 78 million people have been infected by HIV, which destroys immune cells and leaves the body exposed to tuberculosis, pneumonia and other opportunistic diseases.

Thirty-nine million have died, according to UN estimates.

Antiretroviral drugs, invented in the mid-1990s, can treat infection, but cannot cure it or prevent it.

Treatment is lifelong, carries side effects and for many health systems, the drugs bill is spiralling, said Anthony Fauci, head of the US National Institute of Allergy and Infectious Diseases (NIH), whose parent organisation funded the research.

"This innovative research marks an important step toward our goal of putting HIV into sustained remission in chronically-infected people," Fauci said in a press release.

The approach behind eCD4-Ig is based on the idea that two is better than one. Separately, the two mimics are not effective, but together they are.

They are delivered into the body inside a harmless adenovirus that is used extensively in medical research.

Once injected into muscle tissue, the virus uses cells to crank out the protective protein, in quantities that could last for years.