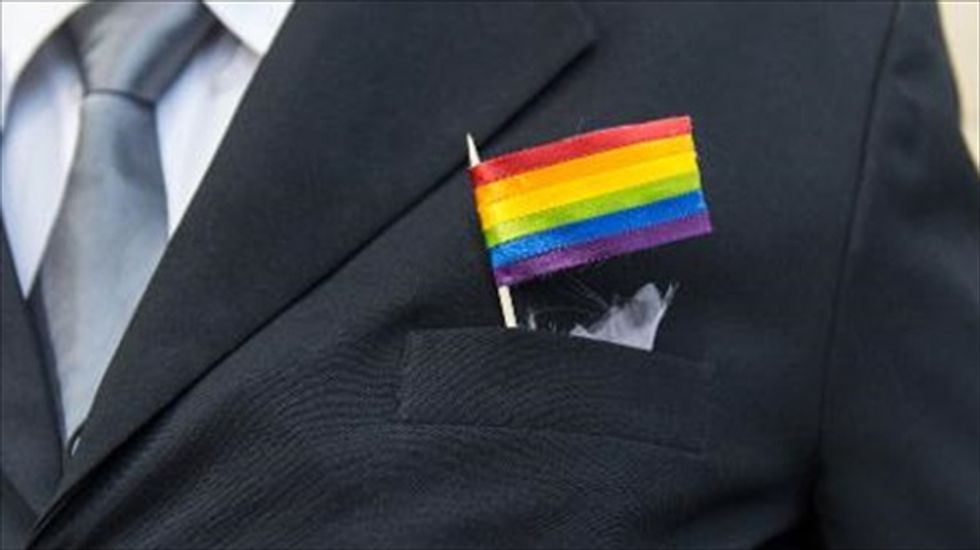 A rainbow flag during a wedding ceremony at the Court of Justice in Rio de Janeiro, Brazil, on Dec. 8, 2013 [AFP]

A judge in Washington state on Wednesday ruled that a florist who refused to sell flower arrangements for a gay couple's wedding violated state anti-discrimination law, court records show.

Florist Barronelle Stutzman was sued by both the state Attorney General Bob Ferguson and the couple, Robert Ingersoll and Curt Freed, in 2013.

The pair were longtime customers of Stutzman's Richland business, Arlene's Flowers, and asked her to provide decorations for their wedding following the state's legalization of same-sex marriage.

Stutzman maintained that her Christian beliefs prevented her from selling flowers for the same-sex wedding, "because of (her) relationship with Jesus Christ," according to court documents.

"Confirming the enactment of same-sex marriage, there would eventually be a direct and insoluble conflict between Stutzman's religiously motivated conduct and the laws of the state of Washington," Benton County Superior Court Judge Alexander Ekstrom said in his 60-page opinion.

"For over 135 years, the Supreme Court of the United States has held that laws may prohibit religiously motivated action, as opposed to belief," Ekstrom added, according to a copy of the document published online by the Los Angeles Times.

Alliance Defending Freedom attorney Kristen Waggoner, who is representing Stutzman, said in a statement, "You put your home, your family business, and your life savings at risk by daring to defy a government mandate that forces you to promote views you believe are wrong."

Attorneys for the group will appeal the ruling, the statement said.

Ingersoll and Freed, who filed the suit with the help of the American Civil Liberties Union of Washington State, hailed the ruling.

"We were hurt and saddened when we were denied service by Arlene's Flowers after doing business with them for so many years," Freed and Ingersoll said in a statement.

"We respect everyone's beliefs, but businesses that are open to the public have an obligation to serve everyone," they added.

Ekstrom deferred ruling on fines and damages sought by the couple to a later date.