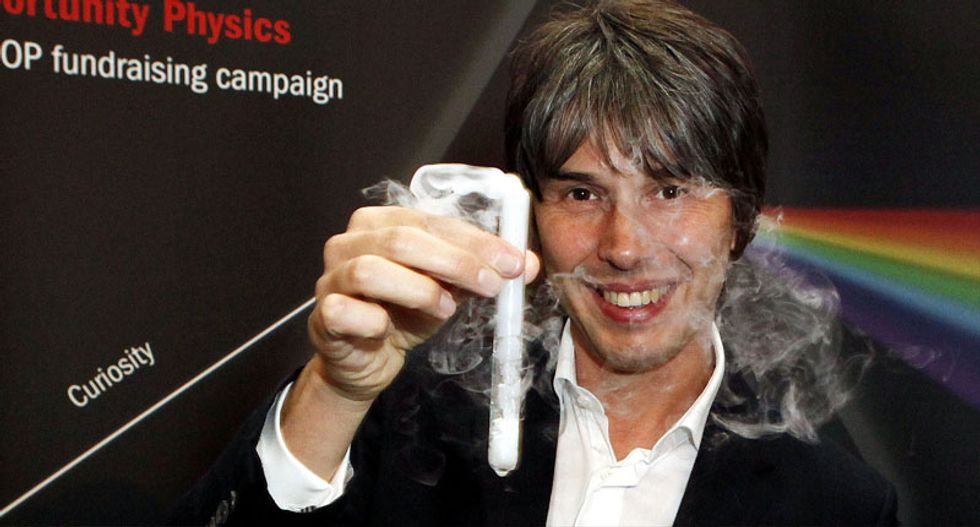 Brian Cox (The Institute of Physics/Flickr)

Broadcaster and physicist Brian Cox recently explained why the discovery of the Higgs particle was so amazing.

"We sort of do know what the fuck is going on at some level with subatomic particles," he said on the Joe Rogan Experience podcast. "If you look to the LHC -- the Large Hadron Collider -- which is the place where we generate the highest energy, so it is the biggest microscope in the world in that sense, we have an extremely good understanding of the laws of physics at that level, up to and including the discovery of the Higgs particle."

Cox, who was recently appointed Royal Society professor for public engagement in science at the University of Manchester, explained that the Higgs particle -- also known as the Higgs boson -- was predicted by Peter Higgs and other theoretical physicists in the 1960s.

"The idea is, basically, that early on in the expansion of the universe, so let's say less than a billionth of a second after the Big Bang, as the universe cooled something condensed out into empty space," he said. "So empty space isn't empty. It's full of Higgs particles," said Cox

The resulting "Higgs field" gives all other particles mass, and explains why some particles are heavier than others.

"That's the remarkable thing, if you think about it," Cox continued. "(Eugene) Wigner wrote an essay back in the 60s, I think, called 'The Unreasonable Effectiveness of Mathematics in the Physical Sciences.' The unreasonable effectiveness is demonstrated by this discovery."

The Large Hadron Collider, the world's largest and most powerful particle accelerator, was built specifically to test the prediction.

"Then 50 years later, you build the biggest machine ever built -- 60 miles in circumference, most of it's in France, a bit of it's in Switzerland, you accelerate protons -- the nuclei of hydrogen -- around this thing at 99.999999 percent the speed of light, they go around the 60 miles 11,000 times a second, we can collide 60 million of them together every second to recreate the conditions that were present a billionth of a second after the universe began, photograph it in the biggest digital camera's ever built -- the one I work on called ATLAS is 40 meters in diameter, 7,000 tons of digital camera in a cavern the size of St. Paul's Cathedral -- and you find it."

"You find the thing that this guy Peter Higgs, working with many other people, predicted to exist 50 years ago because he did some sums! So it's real. It's real. The universe does behave like that. There is a condensate in the vacuum. It is a Higgs condensate. It does give mass to the other particles."

"It's a tremendous testament to the power of human reasoning, and it means that we understand physics."