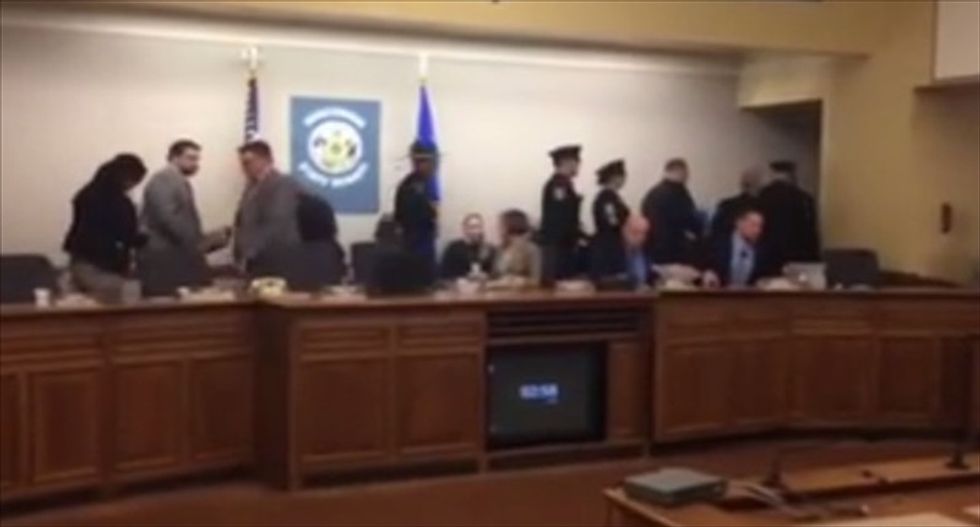 GOP members of the state Senate Labor Committee cut short a hearing on the measure, Senate Bill 44, while approving it in a 3-1 vote. The bill subsequently passed in the Senate on Wednesday and is expected to be passed in the Republican-dominated state Assembly next week. Walker, a prospective Republican presidential candidate, has said that he will sign it into law.

Footage posted online shows the legislators leaving their chamber under police escort 40 minutes early while protesters chanted, "Let us speak," booed them and called them cowards. Committee members cited a "credible threat" to their safety as the reason for ending the meeting early.

The Milwaukee Journal-Sentinel reported on Wednesday that 180 people were cut off from commenting due to the abrupt end to the meeting.

Opponents of the bill seemed to constitute the majority of the audience inside the chamber, while a larger protest took place outside the state Capitol. Around 1,750 people registered their opposition to the bill with committee chair Sen. Steve Nass' (R) office, compared to 28 people supporting it.

But the committee's lone Democrat, state Sen. Bob Wirch, debunked the allegation of a threat.

"I think that, once again, they were uncomfortable," he said. "Everyone was testifying against the right-to-work bill. You could see them getting uncomfortable and they wanted to end it."

The bill would bar labor contracts in the state requiring workers to pay union fees. The Guardian reported that the measure is nearly identical to model legislation devised by a conservative lobbying group, the American Legislative Exchange Council (ALEC).

Before the meeting ended, one speaker, Will Williams, seemed to allude to the bill's outside influence.

"The people you're working for are not from Wisconsin," Williams said at the hearing. "And I think it's high time that, if you are human, that you would think about what you are doing to the people here."

Watch WBAY's report, as aired on Tuesday, below.

WBAY also posted raw footage of the committee member's departure on Facebook, which can be seen here.

Salon's Zachary Petrizzo shared two video showing Lindell fielding calls from pranksters. In one video, Lindell is led to believe that former president Donald Trump is calling in to the event.