When would an anti-war activist back arms sales? When he's Secretary of State 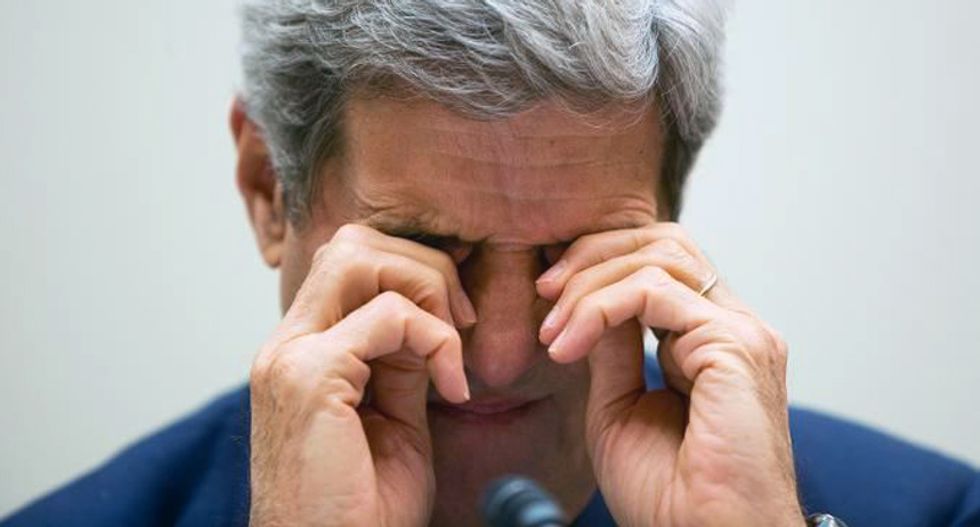 US Secretary of State John Kerry testifies before the House Foreign Affairs Committee on "The ISIS Threat: Weighing the Obama Administration's Response," on Capitol Hill September 18, 2014 in Washington, DC (AFP)

Is there any way that sending arms to the Ukrainian military doesn’t escalate regional hostilities? Who cares! It makes warmongers ‘feel better’

Secretary of State John Kerry has to be the worst anti-war activist in recorded history. Is there a military action - save one - that he hasn’t supported since he came to national prominence as an anti-war activist in the early 1970s? In the the past decade and a half alone, he’s voted for the war in Iraq , strongly defended drone strikes , was the chief advocate for the bombing of Syria in 2013, and was by far the most hyperbolic cabinet member calling for a years-long, multi-country war against ISIS.

And now Kerry has been privately telling lawmakers that he supports the US entering into a proxy-war against Russia by sending lethal weaponry to the Ukrainian military, even though the Obama administration supposedly does not yet have an official position.

He’s hardly alone. The US conventional wisdom machine in the US government is now hurtling towards sending offensive weapons into another foreign conflict, without the slightest concern for the devastating consequences it might bring.

Defense Secretary nominee Ashton Carter floated the idea that he was “strongly inclined” to arm the Ukraine government with US weapons against Russian-backed rebels in his confirmation hearing last week. Since then, as Bloomberg’s Josh Rogin reported Tuesday, “Vice President Joe Biden this weekend came very close to endorsing military aid for Ukraine when he pledged to continue to support Ukraine’s ‘security’ needs.” Ranking members of both parties on the House Armed Services Committee, Reps Adam Smith and Mac Thornberry, said this week that a bill calling for US weapons in Ukraine is imminent. (Gee, I wonder if US weapons manufacturers give Smith and Thornberry extraordinary amounts of campaign cash? Oh, look at that , they do .)

Of course, no US lawmaker has even attempted to explain why this won’t escalate the situation in Ukraine, rather than solve it. It’s been up to the US’s foreign counterparts to inject semblance of rationality into the conversation. As German Chancellor Angela Merkel remarked last weekend “I cannot envisage any situation in which an improved equipment of the Ukrainian army leads to a situation where President Putin is so impressed that he will lose militarily.”

But rather that actually explain how Merkel or other critics might be wrong, conservatives like the Wall Street Journal’s Brett Stephens instead have moved straight to comparing Vladimir Putin to the second-coming of Hitler, suggesting that Russia is somehow just a hair’s breadth away from invading all of Europe in order to justify shipping in US weapons. After all, how could this week’s Hitler possibly be stopped any other way?

[A]rming Ukraine [is not] likely to convince Putin to cave in and give Washington what it wants. Ukraine is historically linked to Russia, they are right next door to each other, Russian intelligence has long-standing links inside Ukraine’s own security institutions , and Russia is far stronger militarily. Even massive arms shipments from the United States won’t tip the balance in Kiev’s favor, and Moscow can always escalate if the fighting turns against the rebels, as it did last summer.

No one doubts Russia invading parts of Ukraine is disturbing and illegal, or that Putin is a conniving liar, but given that US weapons from its various ill-conceived arming operations have been found in the hands of Isis in Iraq and in Syria – and just recently, that $400 million of military equipment to Yemen seems to have fallen into the hands of rebels the US considers its enemy – maybe just this once we should consider the consequences of sending weapons first and asking questions later. Helping to escalate a military confrontation against the nation with the largest nuclear weapons supply in the world could have some consequences beyond the simple front page photograph of Russian-backed soldiers triumphantly holding up captured American-made weapons.

And if the burgeoning neocon renaissance movement needs a realpolitik reason to grasp why the arming Ukraine plan is idiotic, consider that doing so could be exactly the excuse that Russia – which is universally seen to be on the decline and increasingly desperate – actually wants to be able to justify overtly escalating its military campaign (which Walt also lays out in detail ).

The bizarre “give ‘em weapons, it’ll all work out” strategy was inadvertently summed up perfectly by perpetual warmonger Sen. Lindsey Graham, when he said : “I don’t know how this ends if you give Ukraine [weapons]. But I know this: I will feel better.” (For more on foreign policy prowess from Lindsay Graham, read Michael Cohen’s Lindsay Graham: Wrong on Everything .)

This is all quite similar to the Congressional debate over whether to arm the Syrian rebels, which the Senate blindly voted for without barely discussing that the CIA had been doing so for well over a year prior with no success. Shortly after that vote, the New York Times reported that the CIA conducted a secret internal study that showed arming rebels in foreign conflicts almost never worked in the CIA 67-year history – and more often than not, completely backfired into chaos or tragedy.

So as the Obama administration opens up to the possibility of ground troops in an open-ended Forever War with Isis, maybe we shouldn’t be pushing for confrontation with an increasingly desperate and nuclear-armed egomaniac when there’s no actual danger to the US. But if history is any guide, we won’t be that smart.