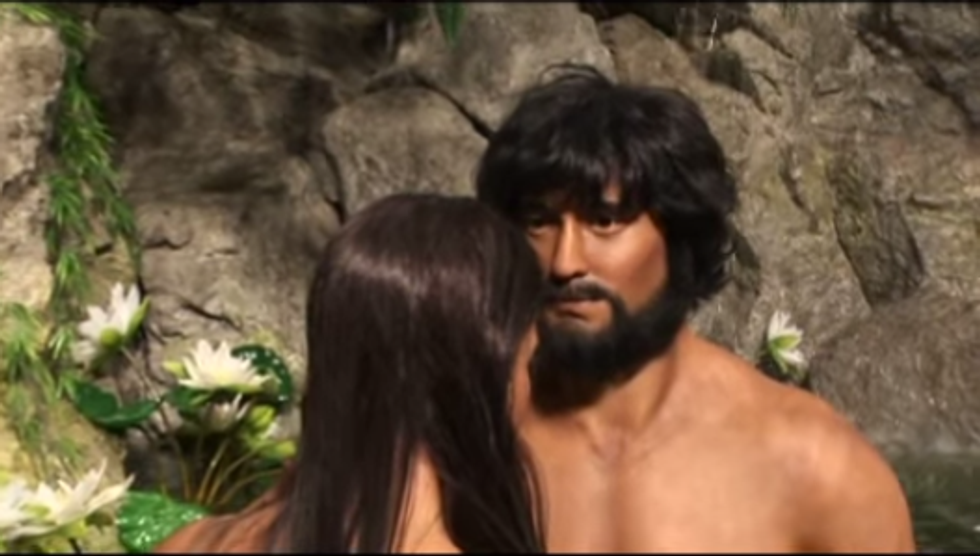 Well, this makes for a nice juxtaposition. A judge ruled that a woman has no right to sue her employer for firing her over her marital problems. But, at the same time, a Creationist non-profit has already sued the state of Kentucky for not subsidizing their Noah's Ark replica or letting them discriminate against non-Christians.

Alyce Conlon was a spiritual director for InterVarsity Christian Fellowship/USA, an organization that ministers to college students in Michigan.  In 2011, she told her bosses about problems she was having in her marriage and confided that she was considering divorce. Her bosses, asking themselves What Would Jesus do, no doubt, put her on leave, first paid, then unpaid. A year later, having not achieved marital harmony and bliss, she was fired. The next month, her husband divorced her.

Conlon tried to sue IVCF because, she claimed, the organization did not fire two male employees they knew had divorced their wives. But the 6th Circuit Court ruled that she did not have the right to sue because federal discrimination laws do not apply to religious leaders at religious institutions. U.S. Circuit Judge Alice Batchelder wrote that, "The government cannot dictate to a religious organization who its spiritual leaders would be." IVCF, Batchelder wrote,  "believes in the sanctity of marriage and desires that all married employees honor their marriage vows," and thus has the right to "consider the impact of any separation/divorce on colleagues, students, faculty and donors."

Batchelder based her decision on “ministerial exception,” and the Supreme Court Case  Hosanna-Tabor Evangelical Lutheran Church and Schools v. EEOC of 2012. The 6th Circuit argued that even though Conlon was not a  minister or even an ordained clergy member, "Conlon’s duties was to assist others to cultivate 'intimacy with God and growth in Christ-like character through personal and corporate spiritual disciplines.' That is a ministerial function"

Batchelder cited Hosanna-Tabor once more, writing, "When a minister who has been fired sues her church alleging that her termination was discriminatory, the First Amendment has struck the balance for us. The church must be free to choose those who will guide it on its way." Great. I feel a lot better.

Let's see how another case worked out, which also involves religion and discrimination.

Answers in Genesis, a religious non-profit dedicated to creationism, wants to prove that the bible is true by building a life-size version of Noah's Ark. And all they want from Kentucky is some tax incentives and the right to discriminate against non-Christians. Unfortunately, Kentucky doesn't like the idea of subsidizing religious projects which refuse to hire non-Christians. So, Answers in Genesis, AiG is doing what any other follower of Jesus would do-- suing.

First, let's review what exactly AiG wants to make. AiG already has a Creation Museum, which they opened in 2007. Despite the existence of what I'm sure is a very educational institution, there are, you may have noticed, still people out there who don't, for some unthinkable reason, believe that the earth is only 6,000 years old. Apparently, AiG thinks there is something that would really help people get on board (foreshadowing pun intended) with their whole creationist theory: "a replica of Noah's Ark made out of wood and set to full-scale dimensions - as specifically described in the book of Genesis," as the AiG lawsuit against Kentucky explains it. Why this replica? Because, duh, it "would be a sign to the world that the Bible is true and that its message of salvation is to be heeded." In other words, "AiG leaders intended to prove, through the Ark attraction, the veracity of Noah's Ark and the flood as recorded in the book of Genesis." Sounds like a great plan.

The lawsuit also states that part of the plan was having the Ark and the museum in Kentucky, home of the Kentucky Tourism Development Act, which allows project developers to recoup up to 25% of their costs after over 10 years. And Kentucky approved the project and the inIndeed, Kentucky approved the project and signed off on the incentives in 2011, but not before AiG agreed to a provision stating that they would not discriminate against non-Christians when hiring people to work on the ark. But economic issues delayed the ark and AiG had to file another application for the tax incentives. This time, however, their application included the right to hire based on religion. So, Kentucky Tourism Secretary Bob Stewart denied this application for benefits which would have required the state to subsidize a project which used discriminatory hiring practices. I'm kind of impressed Kentucky wouldn't be into that, to tell you the truth.

Though AiG very much wants the right to discriminate, they don't like being on the end of what they perceive to be discrimination. The lawsuit says, "Plaintiffs have been denied access to this tourism incentive program because of who they are, what they believe, and how they express their beliefs, in flagrant disregard of their constitutional and statutory rights." In case you couldn't hear the sounds of the tiny violin strings playing, AiG Preisdent Ken Ham played the victim card pretty hard, in a release which stated,

Our organization spent many months attempting to reason with state officials so that this lawsuit would not be necessary. However, the state was so insistent on treating our religious entity as a second-class citizen that we were simply left with no alternative but to proceed to court. This is the latest example of increasing government hostility towards religion in America, and it’s certainly among the most blatant.

In other words, when Christians want to discriminate against non-Christians, that's just religious freedom. When the state doesn't want to be party to this discrimination, it's anti-Christian persecution reminiscent reminiscent of the lions and gladiators of the Roman Empire!