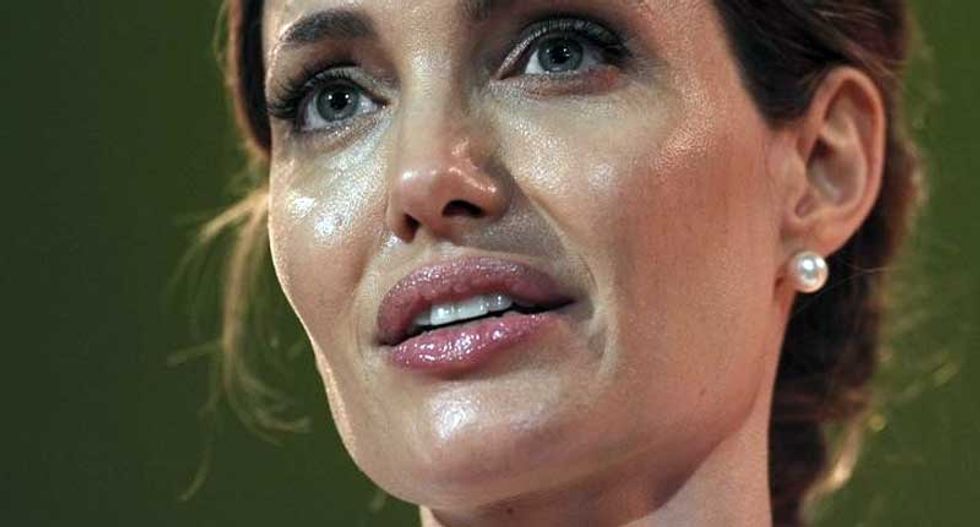 Actress and special envoy of the UN High Commissioner for Refugees (UNHCR), Angelina Jolie, makes her opening speech at a global summit to end sexual violence in conflict, in London June 10, 2014. (REUTERS/Carl Court/pool)

Hollywood megastar Angelina Jolie announced Tuesday that she has had her ovaries and fallopian tubes removed over fears of cancer, following her double mastectomy two years ago.

The actress, who has lost her mother, grandmother and aunt to the disease, said she had the procedure last week after results from a blood test raised fears that she may be in the early stages of cancer.

"I did not do this solely because I carry the BRCA1 gene mutation, and I want other women to hear this," Jolie wrote in an op-ed piece in the New York Times, the same venue where she announced her double mastectomy two years ago.

"A positive BRCA test does not mean a leap to surgery," said Jolie, who is married to fellow Hollywood heavyweight Brad Pitt.

"In my case, the Eastern and Western doctors I met agreed that surgery to remove my tubes and ovaries was the best option, because on top of the BRCA gene, three women in my family have died from cancer," she wrote.

Her doctors said that she should have the preventive surgery about a decade before the earliest onset of cancer in her female relatives.

Jolie said that she had been preparing for the possibility of ovary removal ever since her double mastectomy.

But two weeks ago, she said, she got a call from a doctor who said her blood test results had "a number of inflammatory markers that are elevated, and taken together they could be a sign of early cancer."

She was told to see a surgeon immediately.

"I went through what I imagine thousands of other women have felt. I told myself to stay calm, to be strong, and that I had no reason to think I wouldn?t live to see my children grow up and to meet my grandchildren," Jolie wrote.

"I called my husband in France, who was on a plane within hours. The beautiful thing about such moments in life is that there is so much clarity. You know what you live for and what matters. It is polarizing, and it is peaceful."