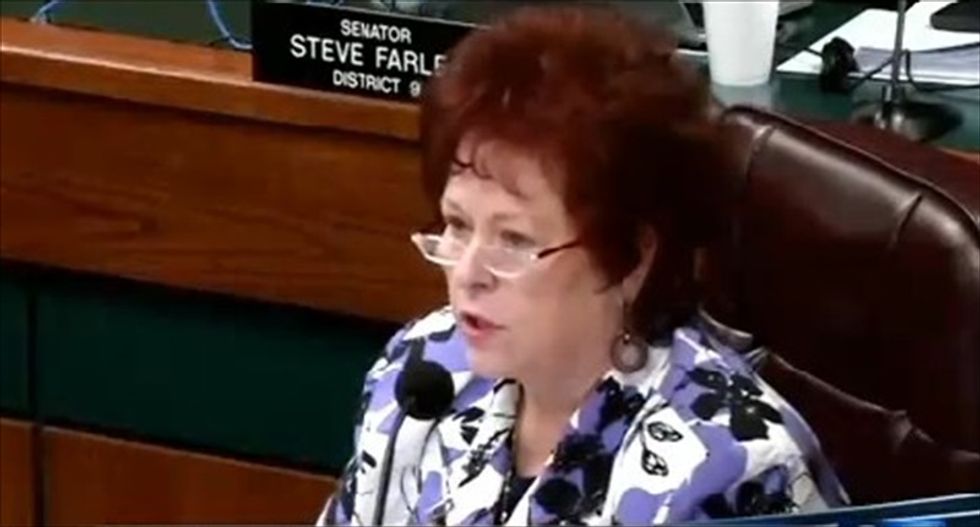 "Probably we should be debating a bill requiring every American to attend a church of their choice on Sunday to see if we can get back to having a moral rebirth," Allen said during a Senate subcommittee meeting on Tuesday.

According to the Arizona Capitol Times, the bill in question involved allowing licensed concealed-carry weapons owners to bring their firearms into public buildings. The Tea Party senator said she did not understand the measure before offering her opinion on the country's "moral erosion."

"Even if you believe that would stem the moral decay, I think the Constitution makes it very clear that our country is founded on the pillar of separation of church and state," he said.

She later defended the comment to the Capitol Times while also describing it as "flippant."

When she was younger, she said, "People prayed, people went to church. I remember on Sundays the stores were closed. The biggest thing is religion was kicked out of our public places, out of our schools."

"I'm not sure that even a Supreme Being such as yourself could get through to the lesser beings in the Arizona Legislature, but perhaps You could take a moment and explain to them the Constitutional reason for a separation between church and state," Montini wrote. "And perhaps explain as well that religion and morality are not something that comes from public schools, but from our faiths, our families and, ultimately, ourselves."

The Republic raised more serious questions regarding Allen earlier this month, when it reported on her efforts to help police officers under internal investigations after her son-in-law, a corrections officer, was accused of sexually assaulting female prisoners under his watch.

The officer, Tim Hunt, was fired after a "preponderance of evidence" corroborated the prisoners' allegations.

Watch KPHO's report, as aired on Thursday, below.