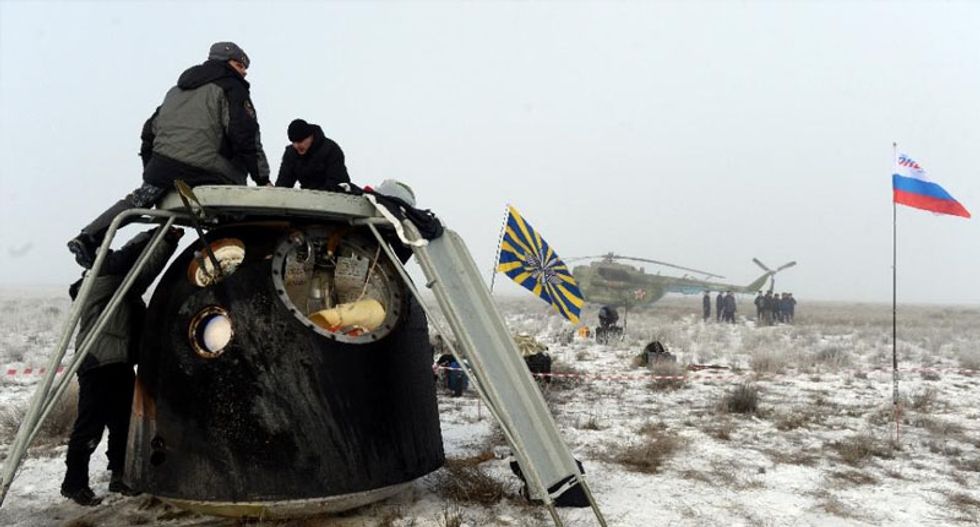 Two Russian cosmonauts and an American astronaut on Thursday returned to Earth aboard a Soyuz space capsule after six months at the International Space Station.

Yelena Serova -- the first female Russian cosmonaut to have spent time on the ISS -- landed along with Alexander Samokutyaev and Barry Wilmore in snowy Kazakhstan just after sunrise.

The International Space Station is one of the few areas of cooperation between Russia and the United States that has not been hit by the crisis in Ukraine.

In the six months that the crew has been orbiting the Earth relations on the surface between their two countries have gone from bad to worse as Washington and Moscow tangle over the conflict in east Ukraine.

However in space, and in the journey back to Earth, US-Russian cooperation could not have been smoother.

"The Expedition 42 crew is back on Earth," said NASA commentator Rob Navias on the US space agency's live broadcast of the event.

"They have landed in a vertical position, upright," he added, citing Russian search and recovery units which pick up returning space-farers after they touch down on the remote steppe southeast of Dzhezkazgan.

"The piloted descent craft completed its landing at 05:14 Moscow Time (0214 GMT)," the agency said in a statement.

The trio left Earth on September 26. They spent 167 days in space and travelled more than 70 million miles (112 million kilometers) during that time, NASA said.

Russian Deputy Prime Minister Dmitry Rogozin, who oversees the space industry, said that the crew had been picked up and were all in good health.

"Everything is in order. The crew has been retrieved from the capsule. They're feeling good. Serova is best off in terms of blood pressure," Rogozin wrote on Twitter.

Television footage showed the smiling crew members being lifted out of the capsule by a recovery team and loaded into waiting vehicles after being wrapped in thick blankets.

During their time in orbit the Russian cosmonauts conducted some 50 experiments and did repair work on the space station, Roscosmos said

A scare over a possible ammonia leak onboard the craft in January forced astronauts in the US side to shelter briefly in the Russian section but that later appeared to have been a false alarm.

The next crew launches from Baikonur, Kazakhstan on March 27, Roscosmos has said.

The men on board will be US astronaut Scott Kelly and Russian cosmonauts Mikhail Kornienko and Gennady Padalka.

Kelly and Kornienko will stay at the research outpost for an entire year instead of the usual six months, "collecting valuable biomedical data that will inform future deep space, long-duration missions," NASA said.

Russia last month confirmed that it will continue using the International Space Station in partnership with NASA until 2024.

NASA had already said the ageing ISS will remain operational until 2024 but Moscow had threatened to pull out and stop financing it by 2020.