Ben Carson floors CNN host: Homosexuality is a sham because prison makes you 'come out gay' 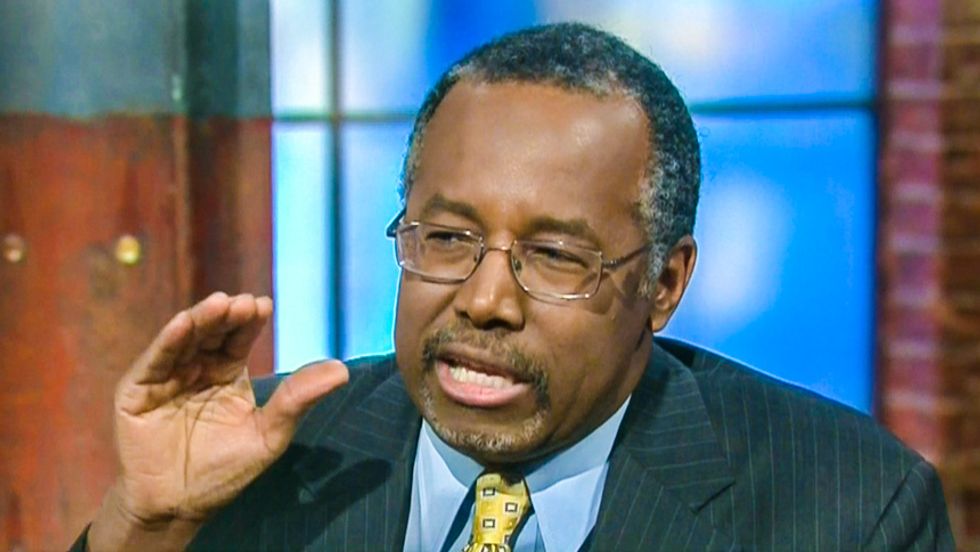 Possible Republican presidential candidate Ben Carson on Wednesday asserted that homosexuality was a choice because people who went to prison "come out gay."

During an interview on CNN, host Chris Cuomo asked Carson if the courts should step in when people of a state voted for laws that infringed on the rights of others "like happened very often with slavery, like many would argue is happening now with people who are gay."

Carson said that in the case of slavery, "our Constitution was followed and we corrected those things."

But the former neurosurgeon insisted that LGBT people did not deserve the same equal protection under the law because they could choose not to be gay.

"You think they have control over their sexuality?" Cuomo wondered.

"You think being gay is a choice," Cuomo pressed.

"Absolutely," Carson said. "Because a lot of people who go into prison, go into prison straight, and when they come out they're gay. So, did something happen while they were in there? Ask yourself that question."

"Most gay people never go to prison," Cuomo pointed out. "And you know, there's a whole theory of dominance."

"Wait a minute, I said a lot of people who go in come out [gay]," Carson clarified.

"If in fact that is the case then it obviously thwarts what you just said," Carson continued. "But here's what's important, why do gay people want to get married? Because they want to have various rights, property rights, visitation rights."

"They want their commitment to count just like mine and my wife's." Cuomo observed.

"Why can't any two human beings -- I don't care what their sexual orientation is -- why can't they the legal right to do those things?" Carson asked. "That does not require a change in the definition of marriage."

"But it would require covering that union as you do others, which is called marriage in our society," Cuomo shot back.

"I don't think so," Carson concluded.