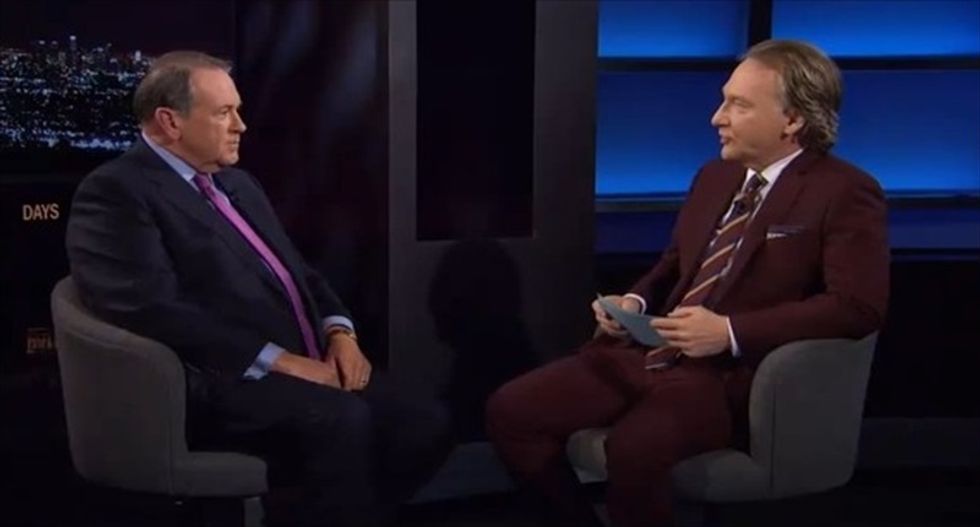 "I think I know 'Bubbaville' better than you do," Maher told the former Arkansas governor. "I think I'm in more cities than you are. And I see an America, I don't know if you know this America."

Maher said that, while people in the "Deliverance area" may have a certain way of thinking, that was not holding true for populated areas.

"This country is not Bubbaville anymore," he continued.

Huckabee had attempted to portray the South and Midwest in a different light from New York and "Hollywood."

"It's a place that, if somebody comes up to you and says, 'You know, I heard your mother is sick and in the hospital, I'm praying for her,' nobody is creeped out by that," Huckabee argued.

"They say that everywhere," Maher replied. "You don't think people pray in California?"

"I think they do," Huckabee said. "If I lived in California, I'd be praying a lot."

"It's such a weird thing, because I hear this all the time from social conservatives like yourself," Maher told the former Fox News host. "You feel put upon, you feel somehow the world is against you. You're 80 percent of the country; even in the blue states, most people are religious, most liberals follow a religion; most Democrats do. I'm the only one sneering at you. Nobody else is. So I don't understand that persecution complex, except it's in Christian history -- you love being persecuted."

Maher later told Huckabee that Sen. Ted Cruz (R-TX) was trying to "steal [his] lunch" by declaring his presidential candidacy at Liberty University earlier this week.

"He could have picked his alma mater, Harvard, but that would send an awful message that he believes in reason and logic," Maher quipped, before scoffing at Huckabee's non-answer over whether he would also join the GOP race.

"Is he a threat to you?" Maher asked.

"I think everybody's a threat to me," Huckabee said, drawing a laugh. "Everybody assumes that the only people who supported me eight years ago are people who are religious. The fact is, if they all really supported me, I'd have been the nominee."

Watch the interview, as posted on Friday, below.