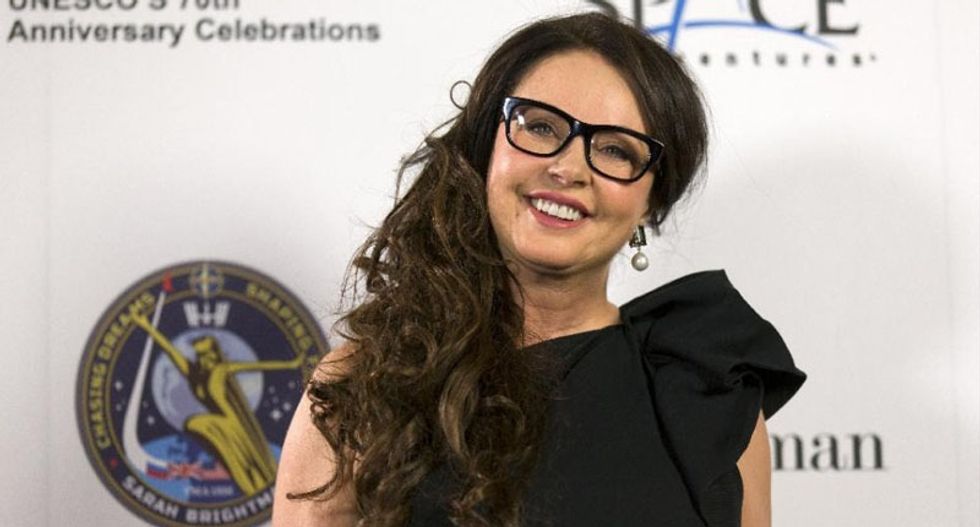 British singer Sarah Brightman said Tuesday she was working with ex-husband Andrew Lloyd Webber to perform in space after paying $52-million (48 million euros) to fly to the International Space Station.

The "Phantom of the Opera" singer will take her reputation for hitting the high notes to an unprecedented level when she becomes the first soprano to sing on board the International Space Station.

During a press conference in London's West End theatre district, around the corner from where her stage career took off in "Cats", Brightman described the challenges of singing while orbiting 250 miles (400 kilometres) above Earth.

"Singing in microgravity is a very different thing to singing down here, we use the Earth to ground us when we sing," said the performer, who scored a British top 10 hit with "I Lost My Heart To A Starship Trooper" in 1978.

"It's finding a song that suits the idea of space and something that is incredibly simple as well, not too complicated to sing.

"I have been working with my ex-husband, Andrew Lloyd Webber, who's actually come up with the most beautiful line."

The 54-year-old, who has been learning Russian and survival skills as part of a gruelling training regime, explained she was trying to "connect with a choir, or children, or another singer on Earth" for a live performance.

"That would be a beautiful thing," she said.

The 30-million selling artist admitted that her space flight -- the first "space tourist" trip since 2009 -- seemed "unrealistic and crazy", but said that watching the first Moon landing in 1969 when she was nine years old had been "a pivotal moment" in her life.

The soprano is due to spend 10 days in space, blasting off from the Baikonur cosmodrome in Kazakhstan on September 1, becoming the eighth space tourist in a flight arranged by US firm Space Adventures.

In January she began training at the legendary Gagarin cosmonaut training centre in Star City outside Moscow.

In pictures of the survival course released by the training centre, Brightman is shown in a snowy forest of fir trees, lashing tree trunks together to make a shelter while wearing waterproof jacket and trousers and a winter hat.

She is in training with cosmonauts and astronauts from NASA, the Russian space agency and the Japanese space agency, as well as with a Japanese businessman who will take over as her replacement on the space flight if she has to drop out.

On the survival course Brightman has to spend 72 hours outside and construct a wigwam shelter using branches and a parachute, while knee-deep in snow, in case her Soyuz landing capsule veers off course.

Brightman revealed she had passed the physical and psychological tests with flying colours, crediting her stage background.

"I've found many parallels between my training and what I've been doing as a performer," she said.

"You're continually jet-lagged, you're against time, you have to make fast decisions and think on your feet, you're often sweating in costumes, and if you're a solo performer, if something goes wrong, it comes to you."