Cenk Uygur mocks Tucker Carlson: You just told everybody that you're 'Fox's b*tch' 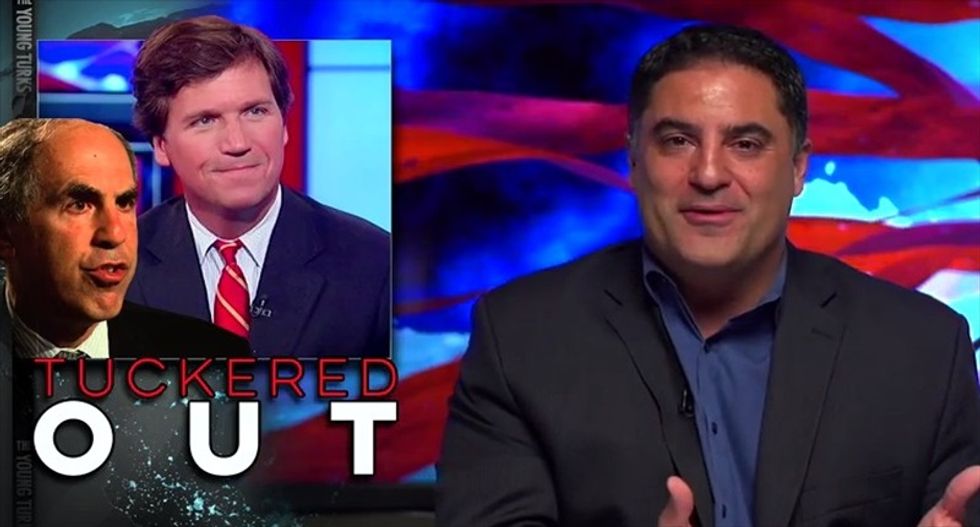 Young Turks host Cenk Uygur defended former Daily Caller blogger Mickey Kaus on Monday after the site scrubbed one of his columns for being critical of Fox News -- where the Caller's owner, Tucker Carlson, works as a contributor.

"I met him a couple of times -- he's an interesting character," Uygur said of Kaus. "I like that at this age, he's still naive enough to think that they were doing journalism at the Daily Caller. Of course it's not journalism. It's just propaganda for the right wing and the Republican Party, and for Fox News. You didn't know that, Mickey?"

As Politico reported, Kaus quit the site after Carlson deleted a post in which Kaus criticized Fox News for "filling up the airwaves with reports on ISIS and terrorism" instead of focusing on stopping "amnesty" for undocumented immigration.

Kaus said Carlson told him, "We can't trash Fox" at the Caller.

"I just don't see how you can put out a publication with that kind of giant no-go area," Kaus said. "It's not like we're owned by Joe's Muffler Shop, so we just can't write about Joe's Muffler shop."

Worse yet, Uygur said, Carlson did not even attempt to defend the move or Kaus' allegation, telling Politico, "Mickey is a great guy, and one of the few truly independent thinkers anywhere. I'm sorry to see him go."

"In other words, have at it hoss," Uygur said, adding that Carlson's statement amounted to saying, "You're independent, I'm not. So now if you read the Daily Caller, you know I'm Fox's b*tch. Isn't that amazing? What an admission."