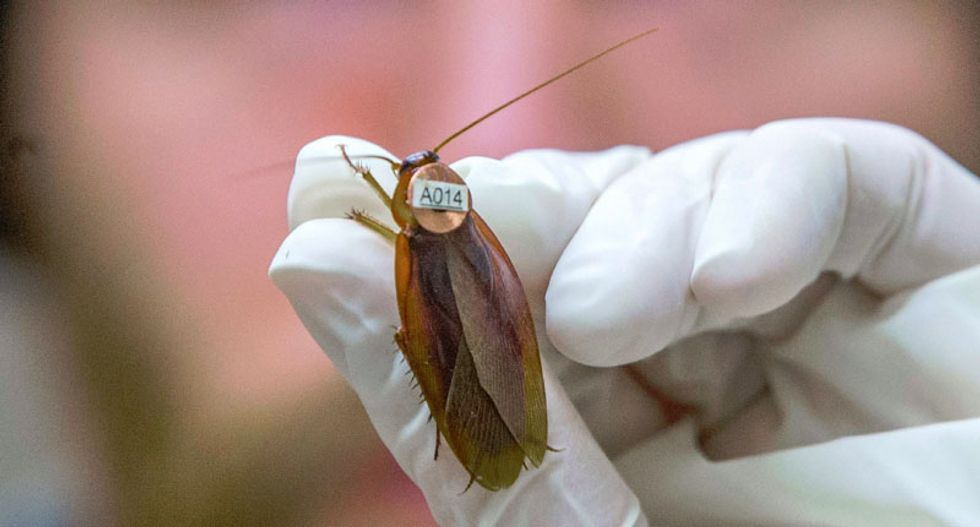 An American cockroach (Periplaneta americana), on which a radio tag is attached, is seen at the Universite libre de Bruxelles (ULB) in Brussels March 6, 2015. REUTERS/Yves Herman

Researchers from the Université Libre de Bruxelles found that the much-maligned cockroach has its own personality and even displays different character traits. The discovery could explain why cockroaches are considered such great survivors and able to adapt to inhospitable surroundings.

Scientists studied the behavior of Periplaneta americana, or the American cockroach, when exposed to light. The tests were carried out over a period of three months, with 16 cockroaches for each trial released in a round arena beneath a bright light. In the middle of that arena were two round "shelters" that provided shade for the dark-loving insects. After being released, the insects were left alone for three hours during which their locations were recorded by a camera and a small chip placed on each roach's back. These chips transmitted their location to a nearby computer where researchers could monitor whether or not they were venturing out into the open light or hiding under a shelter. The experiment was then repeated twice more at later dates.

Issac Planas, the lead researcher on the project and a PhD student at ULB, said the six-legged creatures made perfect test subjects because of a combination of their decision-making abilities and the extensive research that already exists on roaches.

As Planas explained, the purpose of the experiment was to look at variances in group behavior and the way the group came to a decision. Cockroaches are known for their aversion to light, but also for their affinity for protection and groups. All of these preferences influenced each cockroach's decisions in the arena.

As a result, while it might seem probable that they would all quickly gather under the shelters, the study showed that the amount of time it took for the entire group of roaches to settle under a shelter varied. Planas attributed this result to the differences in individual personalities and behavior: if one roach was quick to settle under a shelter then it might encourage others to do the same, reducing the total amount of time needed to achieve the end result.

However, Planas also explained that though one cockroach's decision might sway that of another, each cockroach was ultimately responsible for its choice of whether it would remain in the light or rest under the shelter. This distinguishes cockroaches from certain other insects like ants and termites, who act according to a social hierarchy.

Planas said that this understanding was important because it meant that the results of the study could be applied to animals with similar behavior patterns.

"We have a group of equal individuals that reach a choice, can have consensus decision making as we can see in sheep, bats, some monkey species, fish, birds, for example, or also humans in this case," he told Reuters.

What Planas said surprised him the most about the study was that no matter what combination of personalities existed in the group, by the end of the experiment all of the cockroaches ended up beneath the shelters.

"The fact, and we didn't expect it, is that they always reach this consensus," Planas explained. "So we expected that some groups have more trouble than others to resist consensus or to choose a shelter, but at the end, no, they always finished aggregated. So it is something really inside the individuals or in the cockroaches. So that was really, that was amazing."

The researchers say the varying personalities of the cockroaches could explain their ability to adapt to new surroundings; with 'braver' cockroaches venturing out into new environments, while others remain behind to see if the surroundings are safe.

Planas said he now plans to take his research a step further by analyzing how individual cockroach behavior and learning affects the group mentality.